West Point Thoroughbreds and Marvin Delfiner’s Jaxon Traveler pushed his win streak to three as he captured his first stakes with a gate-to-wire victory in the $100,000 Maryland Juvenile Futurity, for Maryland-bred/Maryland-sired 2-year-olds, during Maryland Spectacular Day at Laurel Park Saturday, Dec. 5. 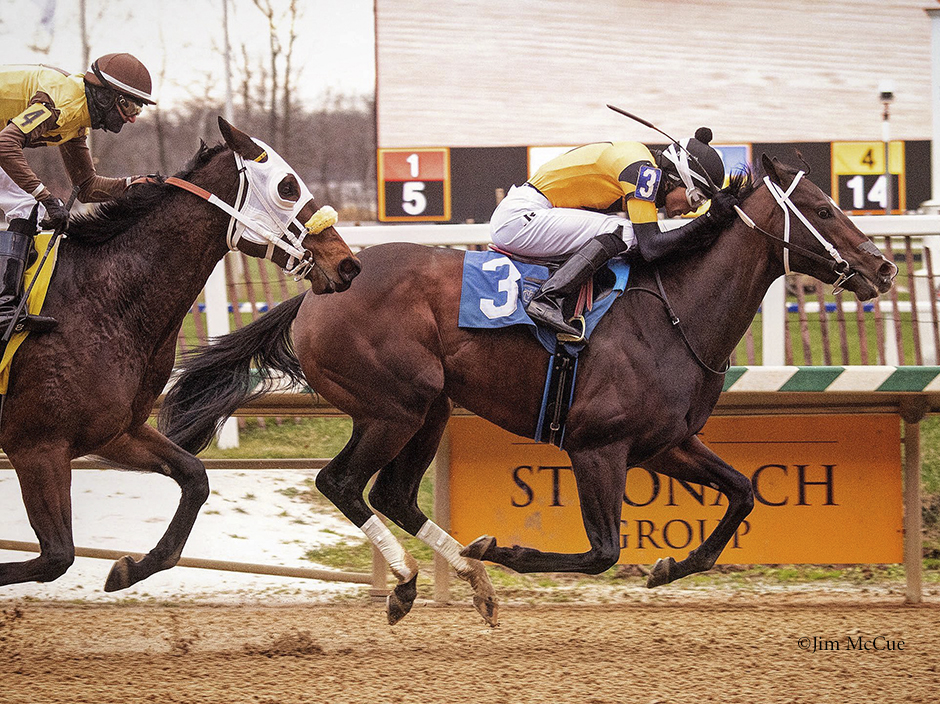 Making his stakes debut in his third career start, Jaxon Traveler broke quickly to the lead and flew through early fractions of :22.56 and :45.61 as stakes winner Singlino trailed in second from the outside. Never challenged, he went on to win by three-quarters of a length over Singlino, with Latin Spice three lengths back in third.

Moving up to seven furlongs for the first time, Jaxon Traveler hit the wire in 1:25.07 with jockey Johan Rosado aboard.

“It’s been a real treat to watch him develop. Each time he’s shipped down to Maryland he’s been a total professional,” said Dawn Lenert, West Point’s chief of marketing and director of partner relations. “We’re very lucky to have a horse like this. Our partners have come out to watch him and cheer for him, both here and on TV. It’s just been a super treat for them to be associated with this type of horse.”

Sold for $80,000 as a yearling at last year’s Keeneland September sale, Jaxon Traveler was purchased by West Point this June for $140,000 at Ocala Breeders’ Sale Spring Sale of Two-Year-Olds in Training.

Turned over to trainer Steve Asmussen, the son of Munnings made his first career start nearly four months later at Pimlico, winning by an impressive 10 lengths in a six-furlong maiden special weight Sept. 25. A month later, Jaxon Traveler tackled six furlongs again in his first start at Laurel Park. The colt won the $50,442 allowance by four lengths over Sir Wellington before returning to his home base of Belmont Park to prepare for the Futurity.

“We’ll talk to Steve. I know we wanted to see how he did today at seven [furlongs],” Lenert said. “We could stretch him out in the Jerome going a mile; however, Laurel just put up that Spectacular Bid going seven furlongs in January. He proved he could go seven today, we’ll see what he does next time.”

Jaxon Traveler, bred by Dr. and Mrs. A. Leonard Pineau, is the fourth winning starter from five foals produced by the stakes-placed mare Listen Boy, a daughter of After Market. The mare has a yearling filly by Street Boss and has been bred to Cross Traffic for 2021.