V. I. P. Ticket proves himself in the A Huevo Stakes

A.R.D. Racing Stables’ V. I. P. Ticket showed up strong in the $50,000 A Huevo Stakes, postponed twice before it was offered Friday, Dec. 11 at Charles Town, as he won by four lengths over North Atlantic to notch his first stakes win. 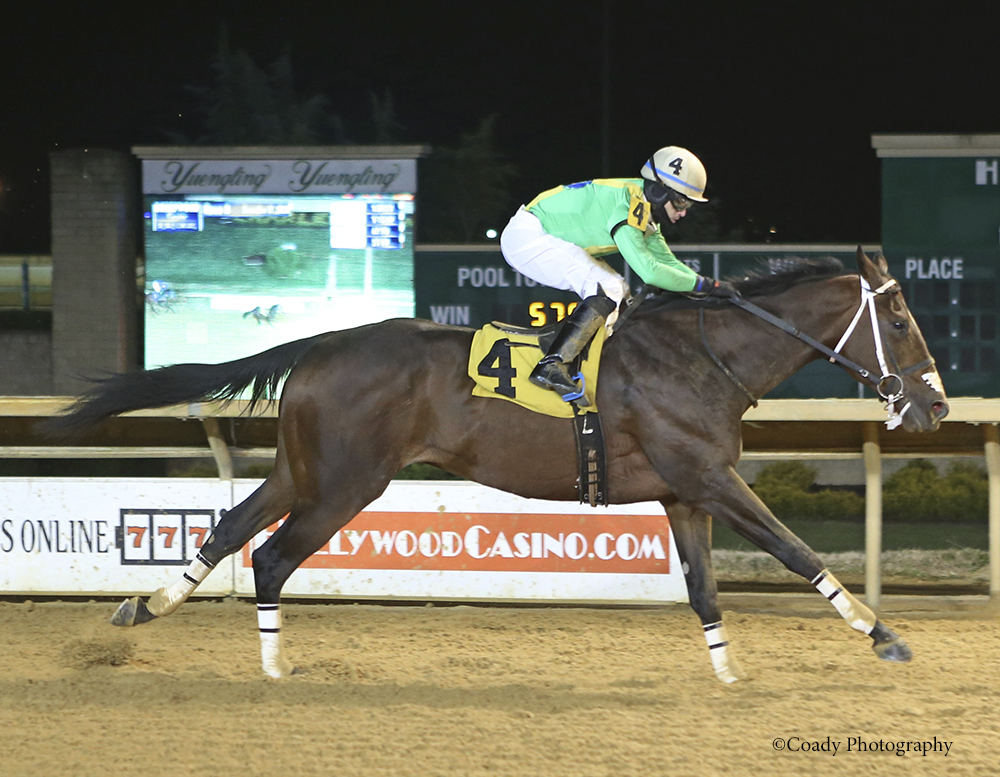 Returning after a trip to Aqueduct last month, where he finished third in an $82,000 allowance, V. I. P. Ticket broke from the four post and settled into fifth as Opera Nite led, with favorite Runnin’toluvya trailing close in second. Moving through the opening quarter-mile in :23.88 and half in :47.96, Runnin’toluvya opened up to take the lead down the backstretch as North Atlantic, with V. I. P. Ticket dueling from the outside, moved past third-place runner Hero’s Man through three-quarters of a mile in 1:13.69 and eventually passed the pair of leading grays.

Getting a neck ahead of North Atlantic as they rounded the final turn, V. I. P. Ticket opened up down the stretch to hit the wire in 1:53.48 for one and one-eighth miles. This year’s West Virginia Breeders Classic Stakes winner Awsome Faith finished third, two lengths behind runner-up North Atlantic.

It was the 4-year-old gelding’s second win of the year, following a head score in a six and a half-furlong allowance at Charles Town in June. Just a month prior, he’d finished third in the Confucius Say Stakes behind Penguin Power and North Atlantic. From his nine starts this year, starting at Laurel Park and hitting Delaware and Monmouth as well, V. I. P. Ticket has won twice, finished second once and secured five third-place finishes for earnings of $94,048.

The son of the late top West Virginia stallion Windsor Castle has improved his overall record to 6-3-10 from 25 career starts as he’s earned a total of $218,548.

The Jeremiah O’Dwyer trainee continued his success as he traveled to Charles Town and won his allowance debut less than three weeks later, finished second in his next start, and picked up another allowance win before heading to Pimlico and finishing third in the Sir Barton Stakes. The rest of his 3-year-old season included two more allowance starts at Charles Town, winning and finishing third, respectively, before a final start at Delaware Park. After a nearly seven and a half-month break, V. I. P. Ticket returned this March, and since May has made a start a month.

Bred by Dr. Alexandro Rubim Dias, V. I. P. Ticket is the first foal out of Touring Hong Kong, a stakes-placed daughter of Cherokee’s Boy. Her 3-year-old filly Award Wanted (by Macho Uno) won first-time out this past June at Delaware Park. The mare has a 2-year-old Buffum colt named Award Nominated who has been working steadily at Laurel but has yet to start, missed to Congrats in 2019, and produced a Klimt filly this past March. She was bred to Biblical for 2021.

Read more about the A Huevo Stakes here