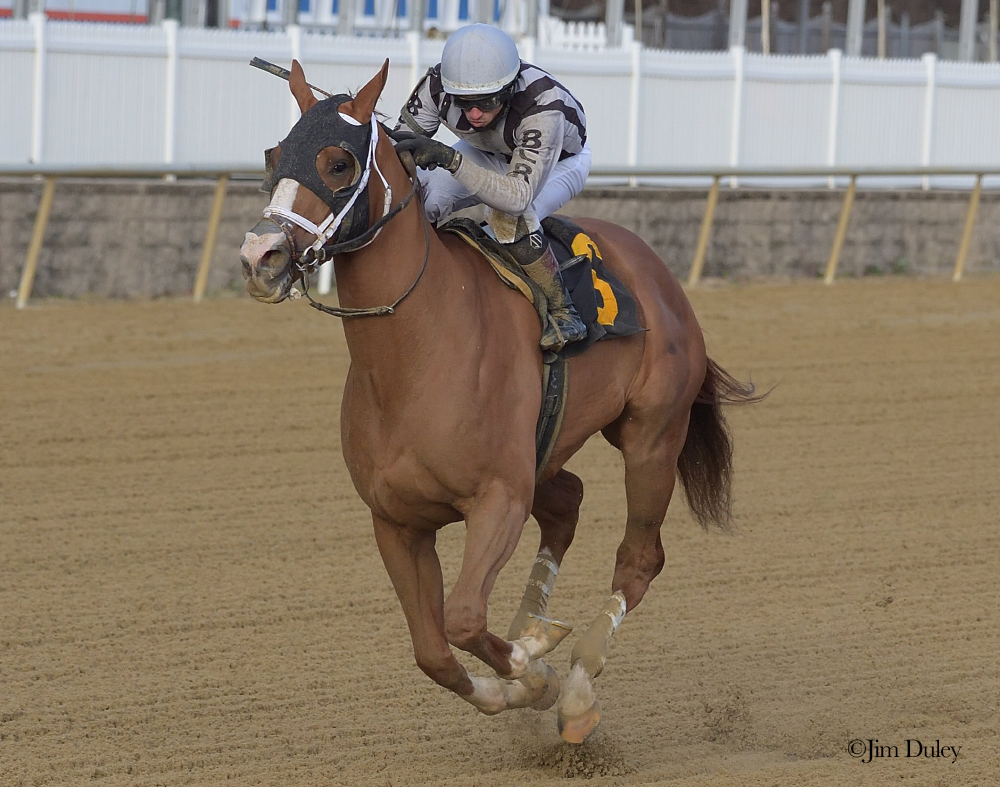 “Brittany told me not to rush him out of there and just leave him alone wherever he’s comfortable,” jockey Jevian Toledo said. “I just let him break and settle and when I felt he was trying to move I made my move, and he gave me everything he had. He’s a really nice horse.”

The gelded son of El Padrino racing for Madaket Stables, Ten Strike Racing, Michael E. Kisber and Black Cloud Racing had crossed the wire first in three consecutive stakes to finish out the year but was disqualified to second in Delaware Park’s New Castle Stakes in September. Not making his 2020 debut until July, he finished third and fourth, respectively, in the Iowa Sprint Stakes and Polynesian Stakes. Following his start in the Iowa Sprint, he was transferred from trainer Brad Cox to Russell at Laurel Park.

Originally campaigned by Black Cloud Racing (Mark Esposito) and trained by Anthony Pecoraro, the flashy chestnut won his career debut in June 2017 and got his first stakes win in the First State Dash three starts later, both at Delaware Park.

At 2 and 3, Whereshetoldmetogo started in 11 stakes and won four at various tracks, including the American Fabius at Gulfstream, and the Concern and Star de Naskra at Laurel. Prior to his graded stakes debut in the 2018 Gallant Bob Stakes-G3 at Parx, Black Cloud sold a majority interest of the Maryland-bred to a group led by Madaket Stables, including Ten Strike Racing and Michael E. Kisber. Whereshetoldmetogo went on to finish second to Firenze Fire, but made headlines as he tried to savage the winner as they neared the wire.

In four starts at 4, in a campaign that didn’t begin until September, his best runs were a Churchill Downs allowance win and a third-place finish in the Thanksgiving Classic Stakes at Fair Grounds.

Bred by David H. Wade, Whereshetoldmetogo was consigned as a yearling in the 2016 Fasig-Tipton Midlantic Eastern Fall sale and purchased by Black Cloud for $7,000. His dam Undisputed Legend, a winning daughter of Domestic Dispute, has produced a family of winners. From eight foals produced, her first five foals are all winners. Her now 3-year-old filly Lady Lino (by Uncle Lino) has yet to start but worked in late December, and she has a Great Notion 2-year-old named Rominski. The now 15-year-old mare was bred to Mendelssohn for this year.