Lucky 7 Stables’ Street Lute signed off on her 2-year-old season with her fourth stakes win in the $100,000 Gin Talking Stakes at Laurel Park on Saturday, Dec. 26. 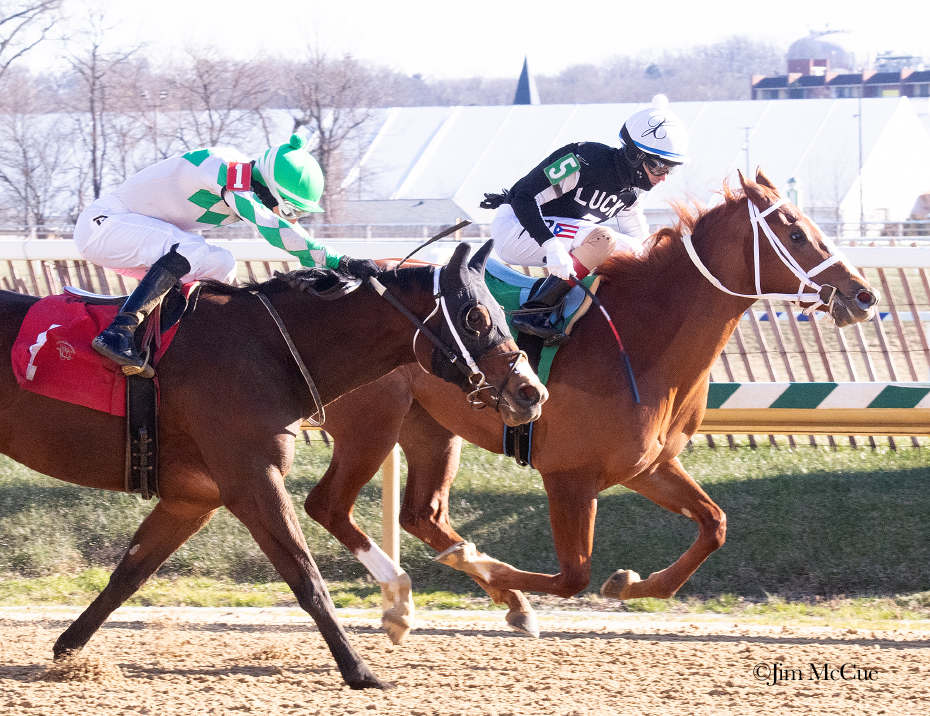 Just three weeks after her victory in the Maryland Juvenile Filly Championship, Street Lute went straight to the front and held it as she stayed ahead of Whiskey and Rye through an opening quarter-mile in :23.55 and half in :46.21. As they turned for home, the Jerry Robb trainee pulled away from Whiskey and Rye and just barely outlasted a late run from Fraudulent Charge to win by a nose. Out of Sorts finished five and a quarter lengths behind in third.

The chestnut daughter of Street Magician broke her maiden on debut last September at Delaware Park and made her stakes debut at that track in the Small Wonder Stakes next out. Facing nine others, she won as the favorite by five lengths over eventual stakes winner Plane Drunk and followed up a month later with her first, and only, second-place finish in the Maryland Million Lassie Stakes. The favorite finished just a neck behind winner Miss Nondescript.

But the filly was determined and found her way back to the winner’s circle in the Smart Halo Stakes, winning by two and three-quarter lengths as she completed six furlongs in 1:09.85, and blew past Juror Number Four in the Maryland Juvenile Filly Championship to win by one and three-quarter lengths. Stepping up to seven furlongs for the first time, she hit the wire in 1:24.83.

Bred by Dr. and Mrs. Thomas Bowman and Dr. Brooke Bowman, Street Lute was purchased by Robb as a yearling in the 2019 Fasig-Tipton Midlantic Eastern Fall sale for $10,500. She is the second foal out of Alottalute, a daughter of Midnight Lute who has a just-turned 2-year-old colt by first year Maryland sire Editorial named Alottahope, and a yearling full sister to Street Lute born May 22. The mare was not bred back for 2021.