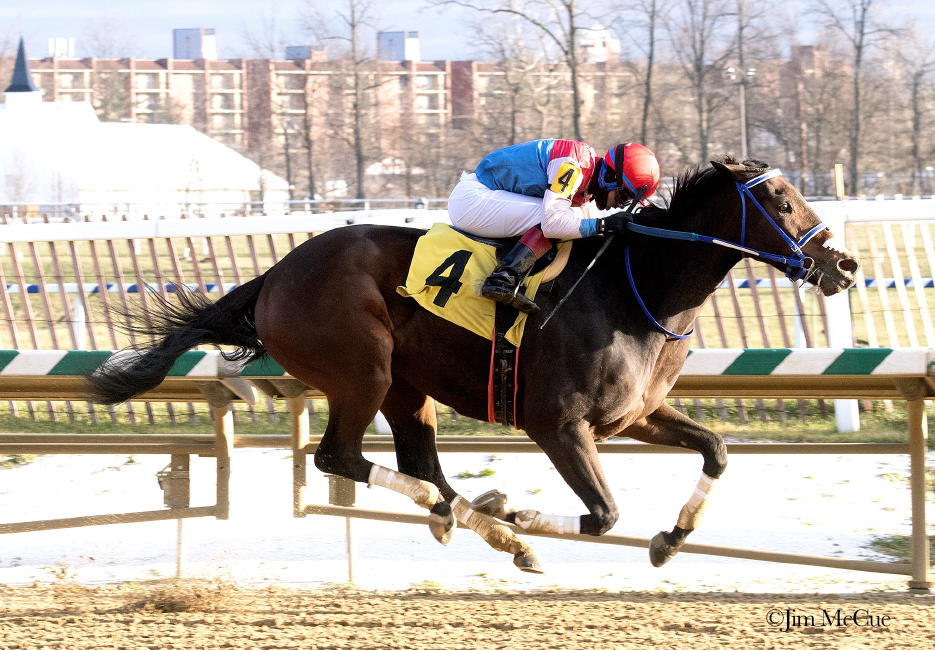 Bred by Sagamore Farm, where the race’s namesake stood, Harpers First Ride broke from the middle post and settled quickly into second behind early leader Saratoga Jack through an opening quarter-mile in :24.61. As Cordmaker and Hall Pass moved up to challenge from the outside, the 1-5 favorite forged ahead through a :48.39 half-mile to catch Saratoga Jack before taking over the lead as they turned for home. Storming down the stretch he won by three and a half lengths over Forewarned, with Cordmaker three-quarters of a length back in third. Final time for the mile and an eighth was 1:48.56.

Since September, the Claudio Gonzalez trainee also won the Deputed Testamony, Pimlico Special-G3 and Richard W. Small Stakes. His 2020 record was a sensational 7-2-1 from 11 starts for earnings just shy of a half-million. In 17 career starts, he has 10 wins, two seconds and a third and earnings of $573,055.

“Claudio told me to get a good position and just sit behind the speed. The speed’s on the outside so [I] just [tried to] get him to relax and go on from there,” jockey Angel Cruz said. “At the top of the stretch I had so much horse, when I asked Harper he responded very well. When Cordmaker came by me I just sat patient and waited a little bit and when I asked him he responded for me. He’s just a game horse. He fights to the end.”

Finishing fourth in his career debut at Churchill Downs in June 2019, Harpers First Ride made just two more starts for his breeder when he was claimed for $30,000 at Churchill Downs by Gonzalez and owner Robert D. Bone in a maiden-breaking effort. He proceeded to the allowance level, winning two of the final three starts of his 3-year-old season.

Harpers First Ride kicked off his 2020 season in January with an allowance win by a neck, finished third a month later and was away from the races until June, when he returned with a win in a Laurel Park allowance by four lengths under the MCA Racing Stable colors. The following month, he made his graded stakes debut in the Monmouth Cup Stakes-G3, finishing fifth.

But the gelded son of Paynter was only getting started as he finished second in an allowance at Parx in August and quickly followed up with a three and a quarter-length win over Cordmaker in the Deputed Testamony and won the Pimlico Special-G3 a month later by two lengths over heavy favorite Owendale. Harpers First Ride drew into the Maryland Million Classic at the end of October, only to be runner-up to winner Monday Morning Qb. He returned with another victory over Cordmaker in the Richard W. Small Stakes in November, winning by three lengths in near-track record time of 1:41.92 for the one and one-sixteenth miles (Willard Scott holds the record of 1:41.80 set in November 1985).

Harpers First Ride, now 5, is the second foal from Polyester, a daughter of Tiz Wonderful who has three winners from three named foals. The mare’s first foal, the Maryland-bred Quality Road gelding Route Six Six, was a $200,000 sales yearling and $340,000 sales juvenile who made his career in California for Jay Em Ess Stable and earned $157,210 from 15 starts. Polyester was sold by the Upson Downs Farm consignment at the 2018 Keeneland January sale in foal to Quality Road for $90,000.