Michael Dubb’s Pete’s Play Call kicked off the new year victoriously as he captured the $100,000 Gravesend Stakes by two and a half lengths on Saturday, Jan. 2 at Aqueduct. 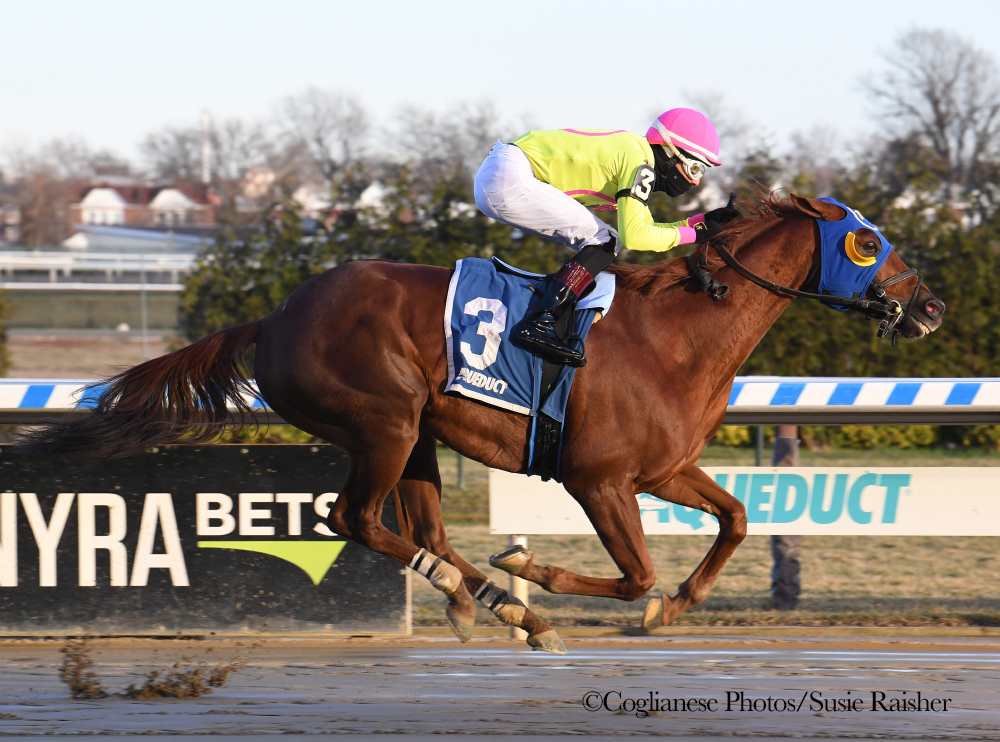 After closing out last season with a two-length triumph in a six-furlong optional claimer at Aqueduct in late October, where he was taken by trainer Rudy Rodriguez and Dubb for $62,500, Pete’s Play Call came into the Gravesend as the fourth-choice in the five-horse field. He broke quickly to push early leader Happy Farm through an opening quarter-mile in :23.09, hit the half-mile mark in front by a head in :46.99, opened up in the stretch then held off a late challenge from Stan the Man.

“He was training very good. He’s a hard-knocking horse,” Rodriguez said. “He’s been doing very well since we claimed him. I thought we paid top dollar for him, but seeing him working in the morning, it looked like he was worth every penny.”

Finishing the six and a half furlongs in 1:17.63, Pete’s Play Call secured the second stakes win of his career, following the Bonapaw Stakes at Fair Grounds in December 2019 in his stakes debut as a 6-year-old. The gelded son of Munnings won by two and a half lengths that day over favorite Wilbo in the five and a half furlong-test, originally scheduled for the turf. He followed up with a fourth-place finish in the Stonerside Sprint Stakes at Sam Houston a month later, his first start as a 7-year-old, and hadn’t started in a stakes until the Gravesend.

Bred by Mr. and Mrs. Charles McGinnes, Pete’s Play Call was purchased as a yearling for $90,000 by Mark Glatt at the 2014 Keeneland September sale. The chestnut made his career debut in December 2015 and broke his maiden five months later, in his seventh career start, by a half-length at Santa Anita in May 2016.

He continued to compete amongst the claiming and allowance levels on the West Coast until shipped to New York in May 2017, where he won a seven-furlong off-the-turf allowance at Belmont Park. Two races later he was claimed by Gary Gullo for $50,000 at Saratoga. For four consecutive years Pete’s Play Call earned six figures, and banked $55,000 in the Gravesend. The newly turned 8-year-old has improved his overall record to 14-9-6 from 46 career starts, with $648,421 in earnings.

Pete’s Play Call is out of the stakes-winning mare Taft Lil Queen, a daughter of Irish Open who has passed on her success to her offspring with nine winners from nine foals, five of them stakes performers. Pete’s Play Call half-siblings include graded stakes winner Kiss to Remember and juvenile stakes winners El Viento and For Royalty - all Maryland-bred champions - and multiple stakes-placed The Prince. For Royalty, a $2.1 million broodmare sales horse, is the dam of Grade 1 winner Constellation.