A high-priced juvenile who didn’t make her first start until 3, Gale has been progressing nicely for owners Bridlewood Farm, Eclipse Thoroughbred Partners and Robert V. LaPenta and New York-based trainer Jonathan Thomas. Finding the Laurel Park surface to her liking, the 4-year-old filly got her third win at the track, and first in a stakes, when driving home to take the $75,000 Geisha for Maryland-bred and/or -sired fillies and mares on Saturday, Jan. 16. 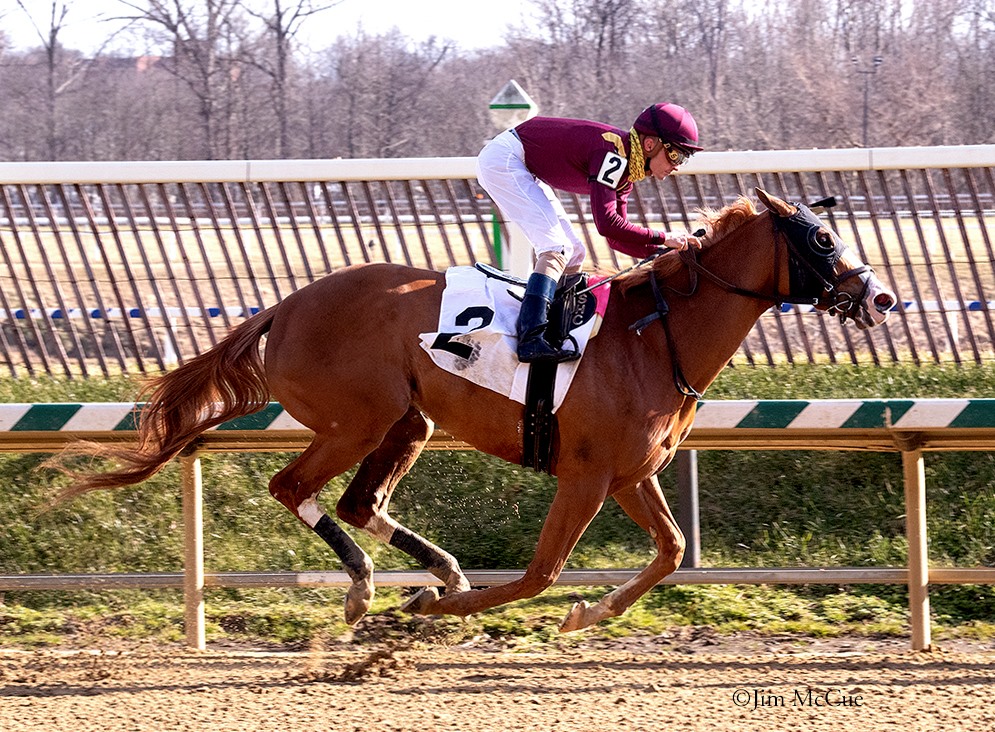 Gale broke slowly but quickly moved up the inside to take the lead from 2020 Geisha winner Artful Splatter as they hit the opening quarter-mile in :23.87. Steadily increasing her lead down the backstretch and around the far turn, Gale ran the half in :46.43 before kicking for home. She repulsed a late bid from Kiss the Girl to win by two and three-quarter lengths, as Coconut Cake finished another seven and a quarter lengths back in third. Final time for the mile was 1:39.24.

The Tonalist filly has five career starts, four at Laurel, and came into the Geisha off a fifth-place finish in Aqueduct’s Comely Stakes-G3, her stakes debut. She increased her earnings to $102,412.

Gale made her first two career starts on Laurel’s turf course last year at 3, finishing third in her debut July 30 (but was moved to second upon a disqualification). She reappeared in a 1 1/16-mile waiver maiden Oct. 22 and won by six and a half lengths. Two weeks later she was back at Laurel in a one-mile allowance that was rained off the turf. Unfazed by the change in surface, she won by an impressive 13 1/2 lengths in a time of 1:34.97 - less than a second off Top Line Growth’s track record of 1:34.07 set in 2019.

Staying in New York for the Comely at Aqueduct Nov. 27, Gale stumbled and bumped with Project Whiskey at the start, got within a half-length of the lead after a half mile but weakened to finish fifth of eight going one and one-eighth miles.

Bred by Robert S. Evans and foaled at his Courtland Farm in Easton, Gale is the first foal for her dam Windy Forecast, a stakes-winning daughter of Stormy Atlantic. The filly was sent through the auction ring as a weanling where she was purchased for $175,000 by SpringHouse Farm at the 2017 Fasig-Tipton Kentucky Mixed sale. She was sold to Quarter Pole Enterprises for $200,000 the next year at Fasig-Tipton Saratoga Select sale. As a 2-year-old her price tag only increased as Bridlewood Farm and Eclipse Thoroughbreds went to $450,000 for her at the Fasig-Tipton Florida Select 2-Year-Olds in Training sale.

Evans campaigned classic winner Tonalist, a four-time Grade 1 winner who captured the 2014 Belmont Stakes the year California Chrome was going for the Triple Crown, and later won back-to-back runnings of the Jockey Club Gold Cup Stakes. The breeder no longer owns Windy Forecast, as the mare was sold at auction in the fall of 2017 for $275,000 to Spendthrift Farm.