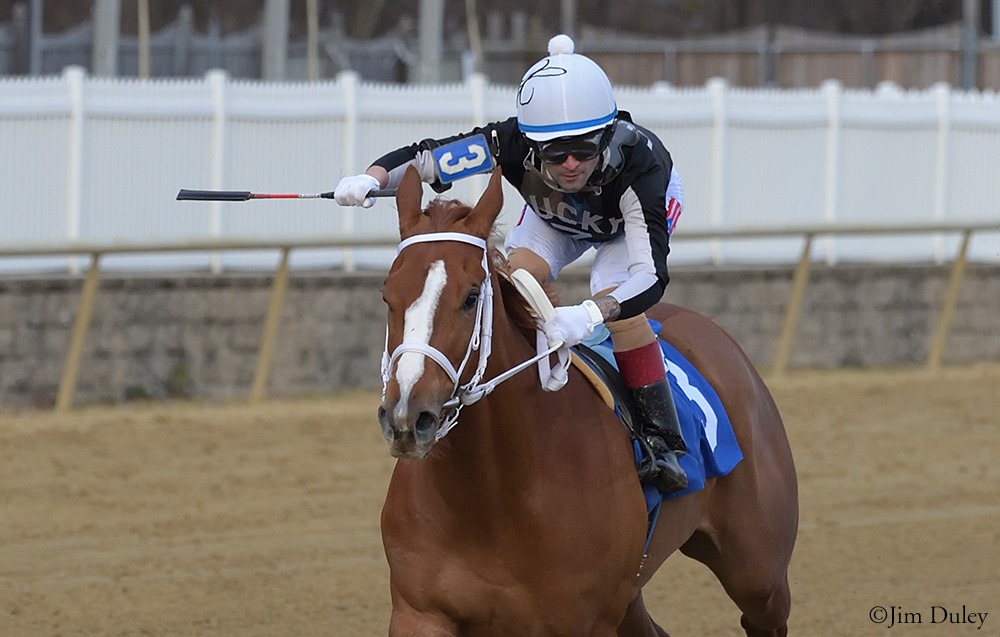 In a battle between chestnut fillies, Trip to Freedom sped up the inside to take the lead, with Street Lute pressing in second through an opening quarter-mile in :23.05. As they made their way around the final turn, Street Lute took over and began pulling away as she hit the half-mile mark in :46.18. The Jerry Robb trainee was easily the best, with Anne Arundel County Stakes winner Miss Leslie second, and Breeze Off the Bay three and three-quarter lengths back in third. Cutting back to six furlongs for the first time in two months, Street Lute came home in 1:10.85.

“The horses, they all improve after they win and she’s done nothing but win, so she expects to win,” winning trainer Robb said. “I think that helps.”

Campaigned by Lucky 7 Stables, Street Lute extended her win streak to four while picking up her fifth stakes victory. Winner of her career debut last September at Delaware Park, she moved right up to stakes company later that month and won the five and a half-furlong Small Wonder by five lengths.

In October she made her first start at Laurel in the Maryland Million Lassie Stakes, finishing second as the favorite to Miss Nondescript by a neck. In Street Lute’s seven-start career, it remains her only non-winning performance.

But the filly didn’t leave any time for doubt as she closed out the year with stakes victories in the Smart Halo (Nov. 14), Maryland Juvenile Filly Championship (Dec. 5) and Gin Talking (Dec. 26). After notching her first six-furlong win by two and three-quarter lengths in the Smart Halo, she moved up to seven furlongs in the Filly Championship and won by one and three-quarter lengths, stopping the clock at 1:24.83. Just a few weeks later, she took the Gin Talking by a nose over Fraudulent Charge as she improved her time for seven furlongs over a fast track to 1:23.39.

The daughter of Street Magician was purchased by Robb for $10,500 as a yearling at the 2019 Fasig-Tipton Midlantic Eastern Fall sale from the Becky Davis consignment. Bred by Dr. and Mrs. Thomas Bowman and Dr. Brooke Bowman, Street Lute is the first starter from two foals of racing age for her dam Alottalute, a daughter of Midnight Lute. The mare has a just-turned 2-year-old colt by Editorial named Alottahope, and yearling full-sister to Street Lute.

Street Lute, who has earned $350,220, is now the second-leading earner for Street Magician, who stands at Roland Farm in Warwick, Md., as the property of Larry Johnson for $2,000 live foal. Mare owners in 2021 will have the stud fee waived if the resulting foal is a registered Maryland-bred.