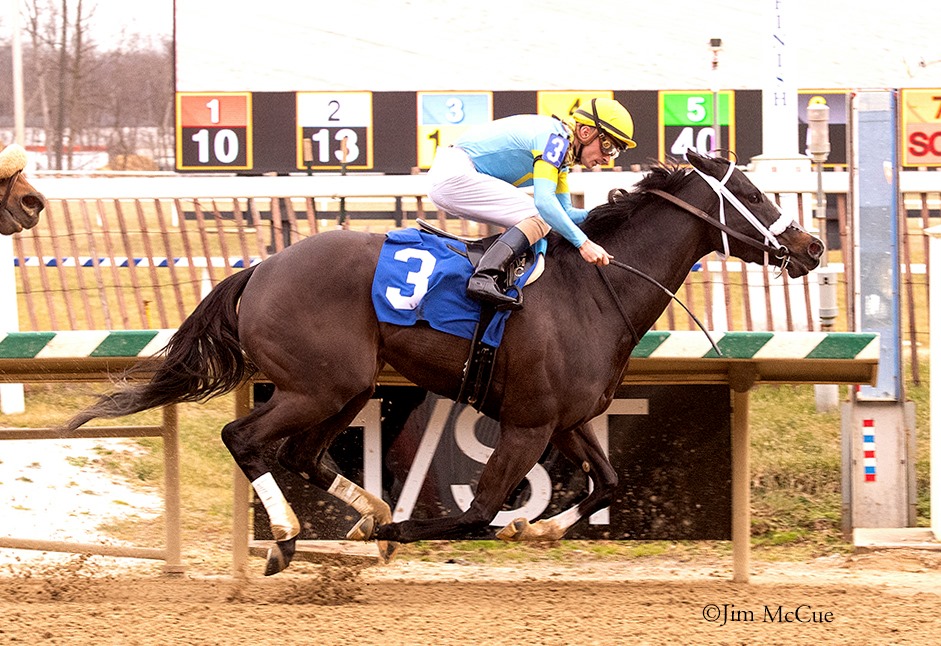 Campaigned by Madaket Stables LLC, Albert Frassetto, Mark Parkinson, K-Mac Stable and Magic City Stables LLC, Hello Beautiful took the early lead under urging from Sheldon Russell as she ran through opening fractions of :22.22 and :45.54. Turning for home, she kicked away from Malibu Mischief, who had chased her early, and held off Club Car, who made a move late to no avail. The 1-5 favorite trained by Brittany Russell won by a length and finished the six-furlong test in 1:10.67.

“It almost seems like in the races she runs in now there’s always one or two [horses] that have a lot of speed, but me and Brittany sit down the night before every time she runs and people forget, our filly’s fast, too,” Sheldon Russell said. “She’s extremely fast out of the gate and coming into the race she was very fresh and she was doing well.”

The Golden Lad filly continued her success from the end of last season, where she collected back-to-back wins in the Maryland Million Distaff Handicap (Oct. 24) and Safely Kept Stakes (Nov. 28). Winner of the 2019 Lassie, Hello Beautiful secured her second Maryland Million Day victory by 11 1/4 lengths while getting seven furlongs in 1:21.84. A month later against open company she defeated graded stakes-placed Reagan’s Edge by three lengths, stopping the clock at 1:22.26 in the seven-furlong Safely Kept.

Hello Beautiful has an overall record of 7-2-1 from 13 career starts. Her record over Laurel’s main track is a perfect 7-0, highlighted by five stakes victories. She also won the Maryland Juvenile Filly Championship Stakes in her final start at 2 by a resounding 11 3/4 lengths.

The winner’s share of $60,000 from the What a Summer pushed her career earnings to $377,110. The $250,000 Runhappy Barbara Fritchie Stakes-G3, to run Saturday, Feb. 13 as part of Laurel’s Winter Sprintfest program, is her next possible target. “We’re going to highly consider it,” says Brittany Russell. “If she gives us any reason to skip, she will get what she wants. If she moves forward and acts like she wants to go, that would be the plan to do that.

“It would be huge. It’s what she deserves,” she added. “She deserves to have a chance in a big one, especially to be able to stay home where she runs so well.”

Bred by Ellen Charles’ Hillwood Stables, Hello Beautiful was purchased by her trainer for $6,500 as a yearling at the 2018 Fasig-Tipton Midlantic December Mixed sale. Her year-younger half-brother Hello Hot Rod (Mosler) was also purchased by Russell as a yearling (out of the Fasig-Tipton Midlantic Eastern Fall sale), in partnership with Dark Horse Racing, for $10,000 – in three starts he has two wins and a second, for earnings of $58,941. The Russell trainees are the first two winners for their dam Hello Now, a daughter of Tiznow whose other foal of racing age is the placed Bandbox gelding Hello Amigo. Hello Now produced a colt by Golden Years, named Surprise Hello, in 2019, missed for 2020, and is expecting a full-sibling to Hello Beautiful this year.

Read more about the What a Summer Stakes here