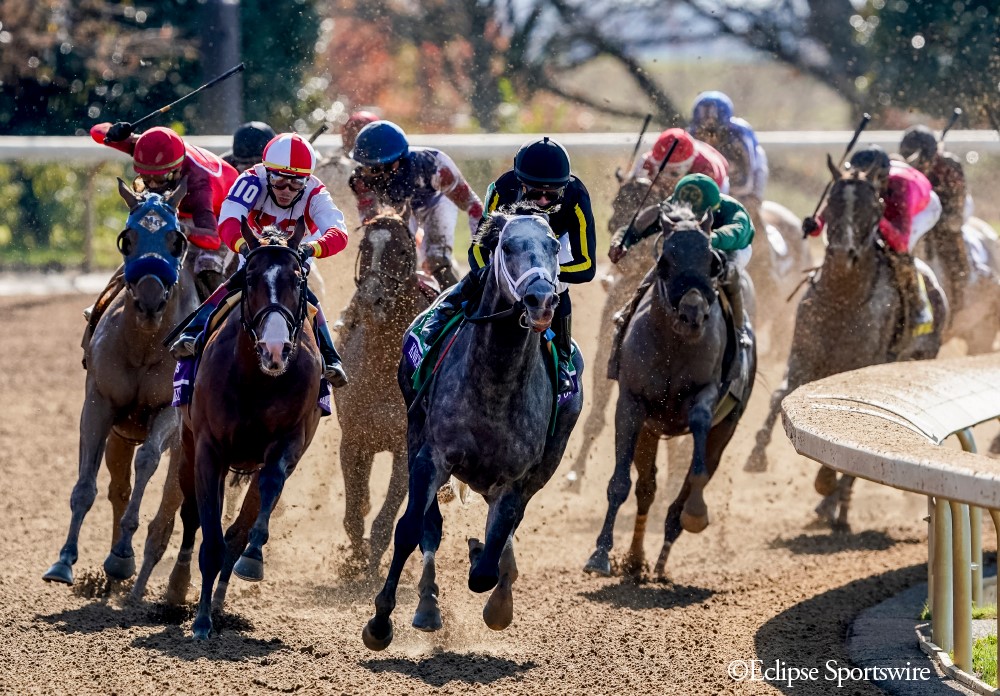 Knicks Go, winner of the 2020 Breeders’ Cup Dirt Mile in Keeneland track record time, earned the honor as the Top Midlantic-bred in polling conducted by Mid-Atlantic Thoroughbred and The Racing Biz.

He was followed home in the poll by Harpers First Ride, 2019 Top Midlantic-bred winner Sharing, and Field Pass, as Maryland-breds took home the top four spots and seven of the top 10 overall.

"The horses on this list represent the best of Mid-Atlantic breeding, and they prove that Midlantic-breds can go anywhere and compete with any horses in the country," said Cricket Goodall, executive director of the Maryland Horse Breeders Association, which publishes Mid-Atlantic Thoroughbred.

Knicks Go, a son of Paynter, raced three times in 2020, winning all three and earning more than $608,000. The first two of those victories came in allowance company before he tackled the Breeders’ Cup, a race in which he went off as the 9-5 post time favorite and won by three lengths in 1:33.85.

The victory was Knicks Go’s fifth from 17 career starts and pushed his earnings to $1,348,995. He’s won two graded stakes, both Grade 1 events at Keeneland. As a two-year-old in 2018, he won the Grade 1 Claiborne Breeders’ Futurity before running second in that year’s Breeders’ Cup Juvenile at Churchill Downs.

“He’s very fast and he loves Keeneland, as well,” Brad Cox, who trains Knicks Go for owners Korea Racing Authority, said after the Breeders’ Cup. “We picked the horse up last winter and he really loves it here… He’s a very aggressive horse, he loves to train. He’s just a very classy horse.”

Knicks Go is out of the Outflanker mare Kosmo’s Buddy. He was bred in Maryland by Angie Moore.

“Never in my wildest dreams did I think we would get a horse like this so soon,” said Angie Moore’s daughter and partner, Sabrina Moore. “I’m really happy that he could send everybody on a ride, not just us. A big horse for Maryland is really cool.”

While Knicks Go was a clear top selection, taking nine of 14 first-place votes cast and appearing in the top four of every voter’s ballot, the race for second was considerably closer, with Harpers First Ride edging Sharing by a single point for second.

Harpers First Ride, also a son of Paynter, is out of the Tiz Wonderful mare Polyester. Trained by Claudio Gonzalez for MCA Racing, Harpers First Ride won seven of 11 2020 starts, including four stakes. His top win came in the Grade 3 Pimlico Special, and he also closed the year with back-to-back wins in Laurel Park stakes.

Bred by Sagamore Farm, Harpers First Ride was a $30,000 claim out of his maiden victory in September 2019.

Sharing, the 2019 Top Midlantic-bred, ended up third this year. The Speightstown filly, also bred by Sagamore Farm, won two of five starts in 2020. The Graham Motion trainee lodged her top win of the season in the Grade 2 Edgewood Stakes in September at Churchill Downs and also ran second in the Group 1 Coronation Stakes at Royal Ascot in June.

Field Pass was fourth on the list after winning three Grade 3 races in 2020. He was followed by Horologist, Largent, Laki, Street Lute, Hello Beautiful, and Jakarta. Field Pass tied for the national lead with five stakes wins in 2020, while Harpers First Ride and Street Lute had four each.

In addition to the seven Maryland-breds, the poll also included New Jersey-bred Horologist, Virginia-bred Largent, and Pennsylvania-bred Jakarta. Five of the top 10 were males, and five were females.

“We created the Top Midlantic-bred Poll to call attention to the quality of the horses bred in the region,” said Frank Vespe, owner and publisher of The Racing Biz. “It’s been exciting to see just how talented and accomplished they are.”

The poll is conducted of media members and others involved in the Thoroughbred industry and restricted to horses that ran in 2020 and were bred in Pennsylvania, Maryland, Virginia, West Virginia, New Jersey, Delaware, and the Carolinas.