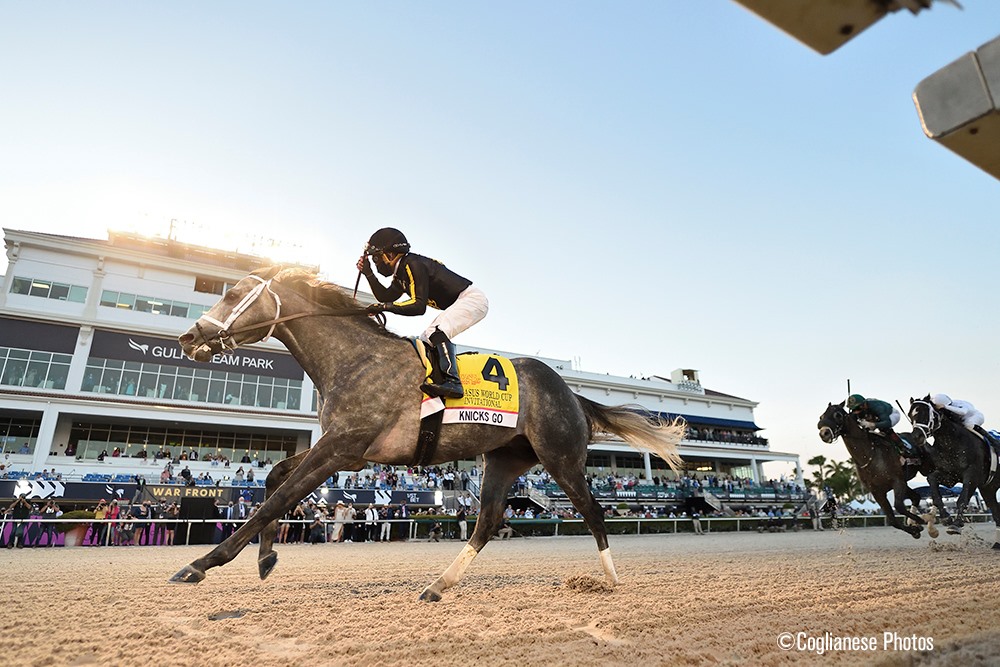 Sent off as the 6-5 favorite, the resilient 5-year-old headed straight to the lead and burned through an opening quarter-mile in :22.90 as Last Judgement challenged from the outside, with Independence Hall and Tax leading the second tier in the field of 12. Though they tried, Independence Hall and Tax couldn’t catch Knicks Go down the backstretch as he hit a half-mile in :46.16 and three-quarters of a mile in 1:09.91, with Last Judgement starting to fade. Heading into the stretch, Knicks Go continued his run with ease and had plenty of energy left to hold off late runner Jesus’ Team and Independence Hall to win by two and three-quarter lengths.

“He is one of the top handicap horses in the country now. He’s a top horse,” said trainer Brad Cox. “This is what you get up for every day, seven days a week, long days for moments like this. I’m very proud of the horse and my team and thank the Korea Racing Authority (KRA) for the opportunity with this horse.”

Making his first start beyond one and one-sixteenth miles, Knicks Go and jockey Joel Rosario finished in 1:47.89 for the mile and an eighth, a little over a second off Arrogate’s track record of 1:46.83 set in the inaugural running of the Pegasus World Cup in 2017. The Pegasus replaced the Donn Handicap-G1 (1959-2016), which Maryland Thoroughbred Hall of Famers Little Bold John won in 1987 and the legendary Cigar won back-to-back in 1995-’96.

Bred by Sabrina Moore and Angie Moore, Knicks Go was sold as a weanling for $40,000 to Northface Bloodstock at the 2016 Keeneland November Breeding Stock sale and later purchased for $87,000 as a yearling by KRA in the 2017 Keeneland September sale.

Less than a year later, the 2-year-old gray colt broke his maiden at Ellis Park by five lengths for trainer Ben Colebrook and quickly moved up to graded stakes company, finishing fifth in the Sanford Stakes-G3 at Saratoga. After finishing third in the Arlington-Washington Futurity, he made his first trip to Keeneland and proceeded to make headlines with a five and a half length-win in the Claiborne Breeders’ Futurity-G1 at 70-1, the longest shot on the board.

The Grade 1 victory sent Knicks Go on to the Breeders’ Cup stage where he held his own against favorite Game Winner and managed to finish just two and a quarter lengths behind him as the runner-up in the $2,000,000 Juvenile-G1 at a mile and a sixteenth at Churchill Downs. He would not hit the board in a stakes until the following August.

As a 3-year-old, the son of Paynter made eight starts, seven in stakes, six of those graded. Winless throughout the season, his best performances included second-place finishes in the Ellis Park Derby in August and a seven-furlong allowance at Keeneland in October.

Transferred from Colebrook to Cox at the beginning of last year, Knicks Go returned triumphantly with a dominating win in an $88,000 allowance at Oaklawn Park Feb. 22. Winning by seven and a half lengths, he finished the one and one-sixteenth miles in 1:42.57.

Though surgery for a bone chip in his knee kept him sidelined after that, Knicks Go returned from a seven and a half-month layoff to set a track record for the mile and a sixteenth in a $75,000 allowance at Keeneland in October, winning by 10 1/4 lengths as he hit the wire in 1:40.79. The win encouraged his connections to keep him at Keeneland for the Breeders’ Cup, where he delivered another record-breaking performance in the Dirt Mile-G1. Leading gate-to-wire, Knicks Go beat Jesus’ Team by three and a half lengths in 1:33.85.

His impressive season last year earned him the title of Top Mid-Atlantic-Bred of 2020, based on a poll conducted by Mid-Atlantic Thoroughbred and The Racing Biz.

Following the Pegasus, KRA’s representative Jun Park confirmed that Knicks Go would continue racing through the end of 2021, with a plan in the works for his retirement to stud in 2022. Now the fourth Breeders’ Cup winner to emerge victorious in the Pegasus, he earned an automatic berth in the $20 million Saudi Cup on Feb. 20 at the Pegasus’ 9-furlong distance. Another option could be the $12 million Dubai World Cup, to be run March 27 at a mile and a quarter.

Knicks Go is one of six Maryland-breds produced by Kosmo’s Buddy, a stakes winning daughter of Outflanker, who has three winners from four starters. After she RNA’d for $195,000 at the 2018 Fasig-Tipton Kentucky fall mixed sale, Kosmo’s Buddy was purchased by Park for a client and later sold to Sallusto and Albina for Newnanner Stud Farm in Versailles, Ky., where she now resides.