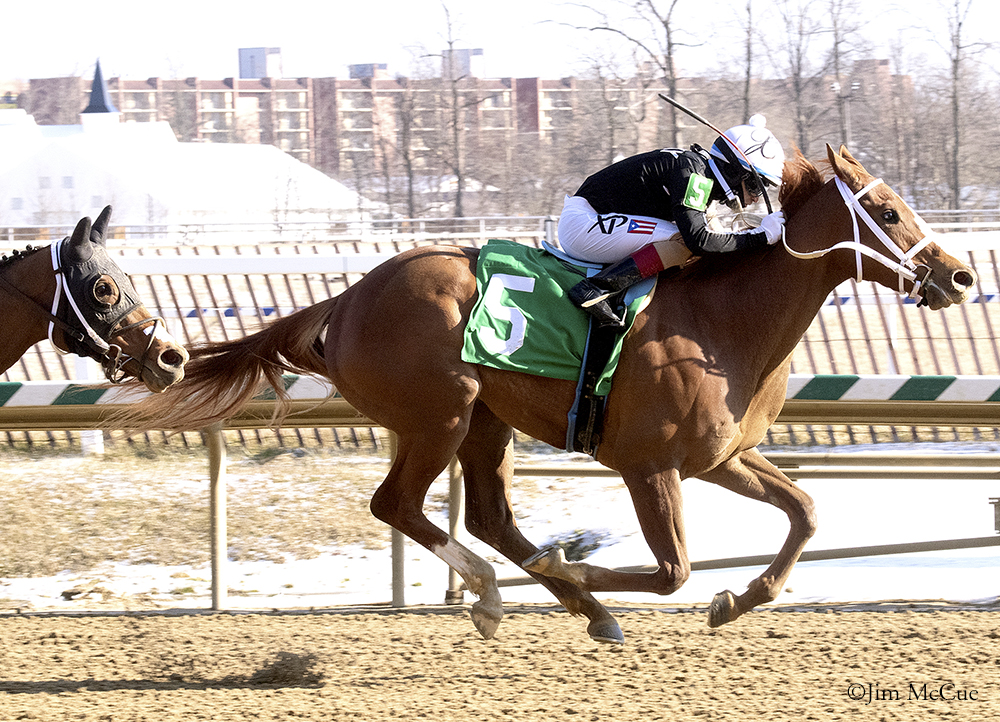 Making her sixth start in stakes company at her home base, Street Lute broke alertly and settled mid-pack as early leader Little Huntress, trailed closely by longshot Whiskey and Rye, flew through an opening quarter-mile in :22.62. The Jerry Robb trainee closed the gap between herself and the leading pair as they neared the final turn, hitting a half-mile in :44.91, and took over the lead turning for home. Giving it her all down the stretch, Street Lute outlasted Fraudulent Charge to win by a length as she finished the seven furlongs in 1:23.59.

It was the second time Street Lute had faced off with Fraudulent Charge and won, with the Kentucky-bred finishing second by a nose in the Gin Talking Stakes, also at seven furlongs, in December.

“From the beginning we all thought she was a very special horse and I think that Jerry’s said that in every interview,” said Gina, assistant trainer, and wife of Robb. “Now with so many stakes under her belt and her performance today, I think she’s finally stamped it. Today was definitely a big day and I think it was her toughest company today.”

It was Street Lute’s second stakes win of the year, following a five-length victory in the six-furlong Xtra Heat in mid-January.

Breaking her maiden in her first start at Delaware Park last September, Street Lute returned to the starting gate just three weeks later for her stakes debut in the Small Wonder, going five and a half furlongs. The favorite delivered, winning by five lengths as she stopped the clock in 1:05.36.

After finishing second by a neck to Miss Nondescript in the Maryland Million Lassie, the chestnut rounded out the year with a three-win streak in the Smart Halo Stakes, Maryland Juvenile Filly Championship and Gin Talking.

Bred by Dr. and Mrs. Thomas Bowman and Dr. Brooke Bowman, the daughter of Street Magician is the first starter from two foals of racing age for Alottalute, a daughter of Midnight Lute. The mare has a current 2-year-old named Alottahope (by Maryland freshman sire Editorial) and a yearling full-sister to Street Lute born late last May.