Three Diamonds Farm’s Kiss the Girl proved hard work pays off as she secured her first victory in stakes company in the $75,000 Conniver, for Maryland-bred/Maryland-sired fillies and mares, 4-years-old and up, on Saturday, March 13 at Laurel Park. 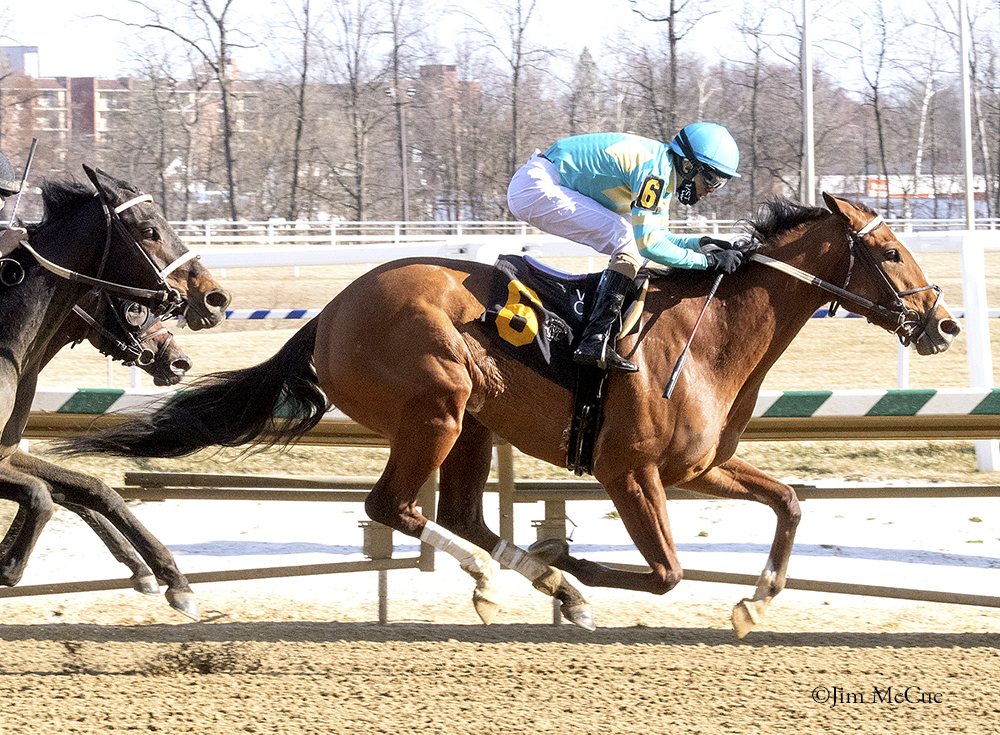 Following a second-place finish in the Geisha Stakes in January, her first start of the year, Kiss the Girl went off as the 2-1 favorite in the Conniver and settled on the outside in fourth as the closely-bunched pack was led through an opening quarter-mile in :23.31 by last year’s Geisha winner Artful Splatter.

Artful Splatter increased her lead as they came around the final turn through a half-mile in :46.31, but couldn’t keep up with the hard-charging Kiss the Girl, who took over in the final sixteenth and held off Lookin Dynamic to win by three-quarters of a length. The runner-up was a neck ahead of third-place finisher Whispering Pines, who was a neck ahead of Artful Splatter.

Trainer Mike Trombetta said the victory “means a lot to all of us. It’s always fun to win a stake, but you take a filly that has this type of pedigree and it becomes very important.”

A $210,000 purchase by Three Diamonds Farm at the 2018 Fasig-Tipton Midlantic Eastern Fall yearling sale, the daughter of Into Mischief broke her maiden by four and a half lengths at Belmont Park first time out in June 2019. Under the guidance of trainer Steve Asmussen, she followed up a month later with an impressive second-place finish in her stakes debut, the Grade 3 Schuylerville at Saratoga, finishing just a neck behind winner Comical.

Last year, Kiss the Girl started off her 3-year-old campaign at Oaklawn Park, where she picked up an allowance win and later contested the Purple Martin Stakes, finishing seventh. After an off-the-board finish in Christiana Stakes at Delaware Park in July, she was transferred to Trombetta’s barn in Maryland. In her second start for the Trombetta barn she recorded her third career win in a seven-furlong allowance at Laurel Park in late November.

Bred by Classic Thoroughbred XII, Kiss the Girl is the first foal and only starter from her dam Spin the Bottle, a daughter of Hard Spun and half-sister to graded stakes-placed sprinter Nathan's H Q. The mare has a yearling filly by Malibu Moon and is expecting a foal by Classic Empire this year.