ZWP Stable and Non Stop Stable’s homebred Shackled Love served as a great source of pride for his connections as he won his stakes debut in the $100,000 Private Terms, for 3-year-olds, by a half-length at Laurel Park on Saturday, March 13. 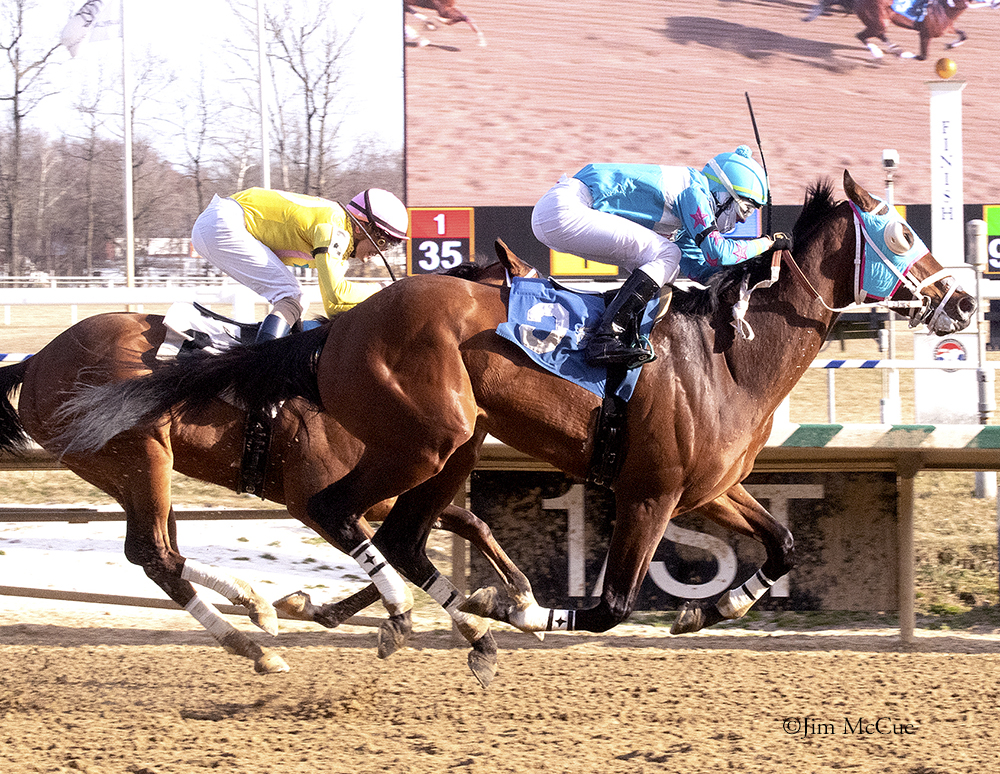 It was the first stakes victory for Shackled Love and his rider Charlie Marquez, Maryland’s leading apprentice of 2020 who turned 18 in January.

“I’m just so excited. I’d like to thank the trainers and owners and everybody that’s gotten me here from when I first started. I’m lost for words. I don’t really know what to say,” said Marquez. “We were walking up front, so I wanted to push the pace a little bit and give my horse the confidence that he needed.”

The 3-year-old gelded son of Preakness winner Shackleford won first time out last October, by a head at Delaware Park, before returning to his home base at Laurel Park, but was off the board in his two remaining juvenile starts. In his 3-year-old debut in January Shackled Love finished second in his first attempt at one and one-sixteenth miles and followed up with another second in a mile-long allowance. His record now stands at 2-2-0 from six career starts with $117,132 earned.

“He ran such a game race last time out and he ran a pretty decent number. He’s got some staying power, so we thought we’d take a shot,” Capuano said. “He drew a good post and there was nothing coming up right away. He’s got some talent.”

Shackled Love is a second generation homebred for Foard Wilgis’ ZWP Stable and Capuano’s Non Stop Stable, who over the decades have sent out a steady stream of stakes performers. He is the second foal, and second six-figure winner, for the Not For Love mare Steady N Love, who won or placed in five stakes over three seasons, counted a win in the 2014 Caesar’s Wish Stakes and earned $241,305. Second dam, the Malibu Moon mare Slow and Steady, was a $14,500 yearling purchase by Capuano and raced in the ZWP Stable colors. She proved a tough competitor, winning or placing in 14 of her 20 starts and earning $123,510. As a broodmare she has been a gem, having also produced Maryland-bred champion Steady Warrior (by ZWP Stable bred and owned and Capuano trained two-time Maryland-bred champion and Horse of the Year Cherokee’s Boy), multiple stakes-placed Lucky in Malibu and Hanky Doodle, stakes-placed Who Dat Boy and three other winners from nine starters.

Steady N Love has a current 2-year-old named Lockdown Larry (by Creative Cause) who was a late May foal, and missed to Golden Lad for 2020. She was bred to Bolt d’Oro for this year.

Slow and Steady, now 20, delivered a filly by Cross Traffic last year and was bred back to Great Notion.