Hillwood Stable’s Cordmaker returned to the winner’s circle for the first time since 2019 as he won the $100,000 Harrison E. Johnson Memorial Stakes for 4-year-olds and up at a mile and an eighth, part of the Good Samaritan Day Program at Laurel Park on Saturday, March 13. 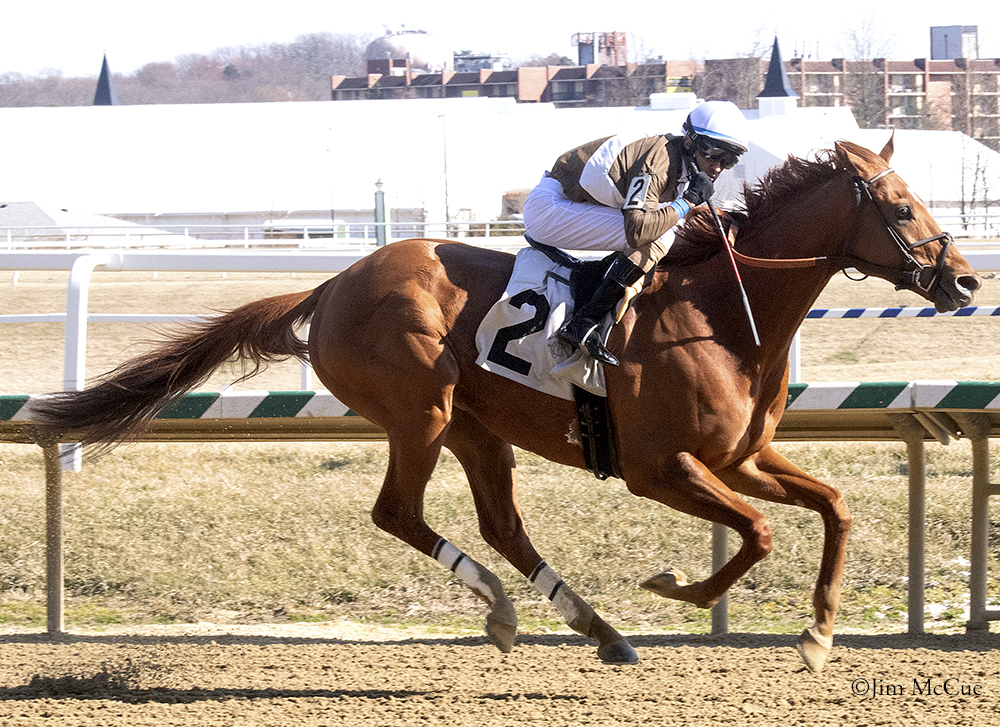 Making his third start of the year and sent off as the slight favorite at 3-1, Cordmaker broke from the second post and quickly took to the lead as Galerio, also 3-1, chased in second while Dixie Drawl stalked in third. Leading the field of nine through an opening quarter-mile in :24.92 and a half in :49.34, Cordmaker held onto the lead as Galerio increased his challenge from the outside nearing the final turn. After six-furlongs in 1:13.58, the 6-year-old son of Curlin proved determined down the stretch as he turned back Galerio to win by a length while stopping the clock in 1:49.37. Dixie Drawl was another two lengths back in third.

“This horse has got some tactical speed, and we haven’t been using it,” trainer Rodney Jenkins said. “Victor [Carrasco] was great today. He got him out there, didn’t have to use him a lot and he finished like a good horse.”

Following back-to-back third-place finishes in the Jennings Stakes and John B. Campbell Stakes in his first two starts of the year, Cordmaker notched the fifth stakes victory of his career, and second in the Harrison E. Johnson Memorial which he also won in 2019. He improved his overall record to 9-4-6 for earnings of $588,640.

A winner at 2, the chestnut gelding won the Jennings Stakes over older runners at 3. With three stakes wins in 2019 at 4, the others coming in the Polynesian Stakes and DTHA Governors Day Handicap, plus a third-place finish in the Pimlico Special-G3, he earned the title of Maryland-bred champion older male.

Ultra consistent since last September, Cordmaker has finished third or better in seven of his last eight starts, all stakes. Among his placings during the stretch was a third behind Harpers First Ride and Owendale in the Pimlico Special-G3 in October.

“We go through periods where we see down moments. As soon as we catch on to a down moment we give them a break,” Jenkins said. “That’s the way horses are. They have their ups, they have their downs, like people.”

Bred by Robert T. Manfuso and Katharine M. Voss, Cordmaker was sold to Hillwood Stable as a yearling for $150,000 at the 2016 Fasig-Tipton Midlantic Eastern Fall sale. A half-brother to stakes winners Corvus (Dance With Ravens) and Las Setas (Seville-Ger), he is one of seven winners from as many starters for his dam Tanca, a daughter of Polish Numbers. The mare’s unnamed 2019 colt by Street Sense sold as a yearling last fall for $240,000 to Repole and St. Elias Stables. She has a yearling colt by Madefromlucky, and was bred back to Honor Code for this year.