I Get It collects first stakes win in $100,000 Sanibel Island

Gary Barber’s aptly named I Get It got it in the $100,000 Sanibel Island Stakes, as she went from last to first in a massive rally down the stretch at Gulfstream Park on Saturday, March 27 in the race for 3-year-old fillies. 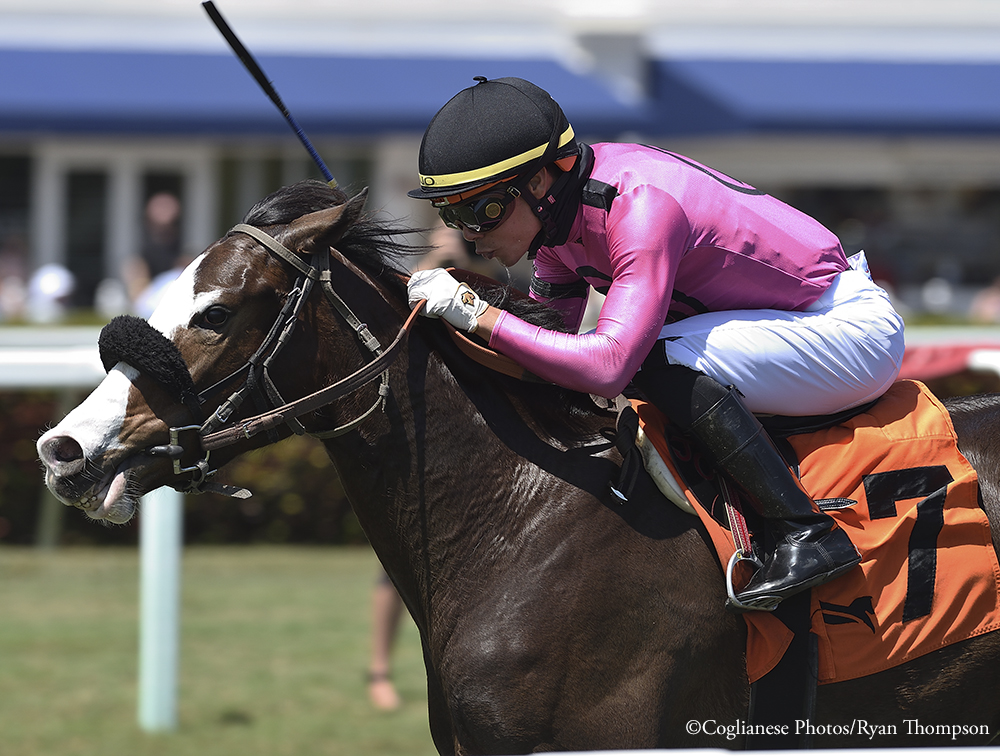 It was I Get It’s first stakes victory, but she’d been competitive in her two previous tries. Exactly one month earlier, she made her graded debut in Gulfstream’s Grade 3 Herecomesthebride Stakes, was bumped and pinched along the rail, lost momentum, but boldly rerallied to be fourth. She was elevated to third after the winner was disqualified and placed behind her for causing the incident.

Sent off the 5-2 second choice in the Sanibel Island, the Ronald Spatz trainee broke from the seventh post and was the early trailer behind opening fractions of :24.64 and :49.08. I Get It made her move around the final turn as jockey Jose Ortiz hustled her to the outside after six furlongs in 1:13.21. Charging for home, she caught the leaders in the final furlong and pulled away to win by a half length while completing the mile on the turf in 1:36.11.

“My plan was to save ground on the first turn and try to keep her clear on the second turn and not get her in trouble,” said Ortiz. “I was just waiting for the spot to go. The pace wasn’t very hot so I wasn’t able to drop in all the way. When I made my move, she responded very good. She has a beautiful turn of foot.”

With her stakes score, I Get It improved her overall record to 5-0-1 from nine career starts, while boosting her earnings to $156,278. Barber purchased the filly after her race in the Herecomesthebride.

“I can’t even describe it, because I really thought she could have won last time,” said Spatz. “If she’d have gotten through the hole or had a better trip, I think she could have won that race. The graded [win] would have meant a lot for her, and she got graded [placed] anyway, so we’re happy with that.”

Bought by Spatz for $8,500 as a yearling at the 2019 OBS October sale, the flashy blaze-faced daughter of the equally flashy Get Stormy has raced exclusively on the turf. She debuted last July at Gulfstream and finished fifth in a roughly-run five furlongs. Two starts later she broke her maiden by five lengths at a mile while risked for a $40,000 tag. She followed up with back-to-back allowance victories at Gulfstream Park West (the old Calder Race Course) – at a mile in October, and at a mile and a sixteenth on Nov. 28, her final start of the year which includes a historic footnote, as it was the final card for the south Florida track’s nearly 50-year run.

I Get It returned Jan. 2 for her 3-year-old debut in Gulfstream Park’s Ginger Brew Stakes, rallying from last to finish fourth, and two and a half weeks later scored by three lengths in a starter race for fillies who had raced for claiming price of $40,000 or less.

“We’re real proud of her. We bought her as a yearling, when she was kind of small and weedy-looking. I love Get Stormy, so we took a shot with her. You can’t measure their heart when they’re young, and she’s just got a huge heart,” said Spatz.

Bred by Flying H Stables LLC, owned by Kent and Tracy Hersman of Paris, Ky., I Get It – given the nickname “Snapchat” at the farm as a youngster because of her unique facial markings – is the first foal for the General Quarters’ mare Twisted Beauty, who was sent to Maryland to foal at Angie and Sabrina Moore’s GreenMount Farm in Glyndon in 2018. Kent Hersman found and followed Sabrina on Instagram and liked her operation, including sales prep, and contacted her on Instagram about sending her a mare. “Out of anywhere I’ve ever boarded out of state, [Sabrina] is the best,” said Hersman.