Laki returns with a vengeance in Frank Y. Whiteley

Hillside Equestrian Meadows’ Laki is now a two-time winner of the $100,000 Frank Y. Whiteley Stakes when coming out on top after a stretch duel at Pimlico on Saturday, April 24. 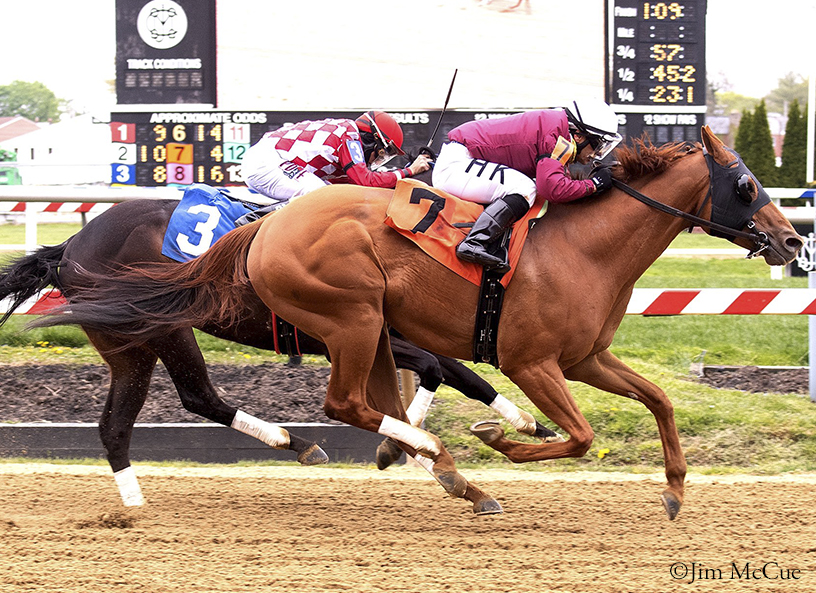 Laki chased pacesetter Lebda through opening fractions of :23.33 and :45.55 and went for the lead heading into the stretch. Battling Lebda to the wire, Laki pulled ahead to win by a half-length while stopping the clock for six furlongs in 1:09.33 for a 96 Beyer Speed Figure. It was four and a quarter lengths back to Maryland-bred Eastern Bay in third.

The packed stakes card was originally scheduled for Laurel on April 17. “It’s been a crazy month for all of us horsemen here in the state,” said trainer Damon Dilodovico. “For him to do what he did, I just can’t put it together. The last race we ran him [the General George on Feb. 20] he was letting me know he wasn’t 100 percent. Not unsound, he just has a way about him. So, the rest was definitely warranted and it paid off.”

The 8-year-old gelding pushed his career earnings over the $800,000-mark with his 11th win. He kicked off the year with a fourth-place finish in the Fire Plug Stakes in January, followed by a third-place finish when beaten four lengths in the Grade 3 General George. He returned to the work tab in early April at Laurel, breezing four furlongs in :49.20, before making his final prep at Pimlico on April 19, breezing another four furlongs in :48.80.

“He means everything to us. . . the whole stable,” Dilodovico said. “He’s our cornerstone.”

Debuting as a 3-year-old in November 2016 and breaking his maiden that December in his second start, the hard-knocking chestnut gelding has won a stakes each of the past five years – he took the 2017 Not For Love, 2018 Polynesian and Howard and Sondra Bender Memorial, and 2019 Frank Whiteley Jr., all at Laurel, and scored in Monmouth Park’s Oceanport Centennial last July in his first start in 2020. In October, he recorded his first win at Pimlico, and his first in a graded stakes, in a thrilling renewal of the Frank J. De Francis Memorial Dash-G3, beating Eastern Bay by a nose, with Steve Asmussen shipper Nitrous a nose back in third.

Over his 33-start career, Laki has contested 24 stakes, winning or placing in 16 of them.

Bred by Tom Michaels and Lorna Baker out of the Swear by Dixie mare Truthful Dutch, Laki is his dam’s only winner from four starters, out of six foals produced. Her youngest, a 3-year-old full-sister to Laki named Halia, has yet to start.