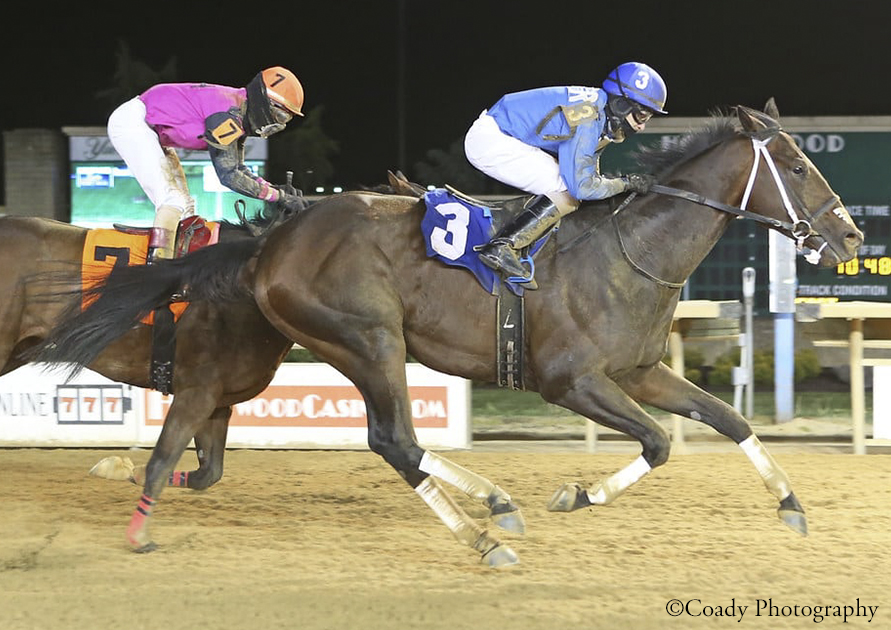 Making his second attempt at the Confucius Say, in which he finished third last year, V. I. P. Ticket settled near the back of the pack as last year’s winner and 1-2 favorite Penguin Power was pressured through the opening half mile. The favorite gave way as Mean Bean and V. I. P. Ticket took control in upper stretch and battled to the wire, with the Jeremiah O’Dwyer trainee edging away in the closing yards. The 5-year-old bay horse completed the seven furlongs in 1:27.31.

“When I bred him, I was just hoping to win against maiden $10,000 claimers here,” owner-breeder Alexandro Rubim Dias (ARD Racing Stables) said of his two-time stakes winner, who could be pointed for the Grade 2, $800,000 Charles Town Classic on Aug. 27. “I really was just hoping to get lucky and win a maiden race with him. But he really loves this track and he’s good going two turns or three turns. That race at Laurel Park last time set up him for this race.”

V. I. P. Ticket kicked off his season with a second-place finish in a mile and a sixteenth allowance in January, followed by a third in an allowance at Laurel at the same distance in April.

Debuting as a 2-year-old in September 2018, V. I. P. Ticket didn’t get his first win until early in his 3-year-old season, taking a six-furlong Laurel Park maiden special weight in 1:10.77 that March in his ninth career start. He picked up two allowance victories at Charles Town in his next three outings, then hit the big stage when contesting Pimlico’s Sir Barton Stakes on the Preakness Day undercard, where he finished third. He wrapped up his season with three more starts through August, adding another allowance victory at Charles Town in July, and didn’t return to the track until March 2020.

After his third-place finish in last May’s Confucius Say, the bay was never worse than third in six allowance starts at Charles Town, Delaware Park, Monmouth Park and Aqueduct before trying stakes company again. The next attempt was a success when he won Charles Town’s A Huevo Stakes, also for registered/accredited West Virginia-breds, in December, finishing four lengths ahead of North Atlantic, whose three previous starts in the stakes included a win in 2017; the 2020 West Virginia Breeders Classic winner Awsome Faith was two lengths back in third. Two weeks later, V. I. P. Ticket closed out his 4-year-old season when fifth behind Harpers First Ride in the Native Dancer Stakes at Laurel Park.

V. I. P. Ticket and his winning half-sister Award Wanted (a 4-year-old by Macho Uno) are his dam Touring Hong Kong’s first two foals. The stakes-placed daughter of Cherokee’s Boy has since produced Award Nominated, a 3-year-old colt by Buffum who has yet to start; the current yearling filly Touring Vouge, by Klimt; and a Biblical colt foaled on March 31.