Lucky 7 Stables’ Street Lute returned to her winning ways with a hard-charging half-length victory in the Stormy Blues as she secured her seventh stakes victory (from 11 career starts) at Pimlico on Sunday, June 13. 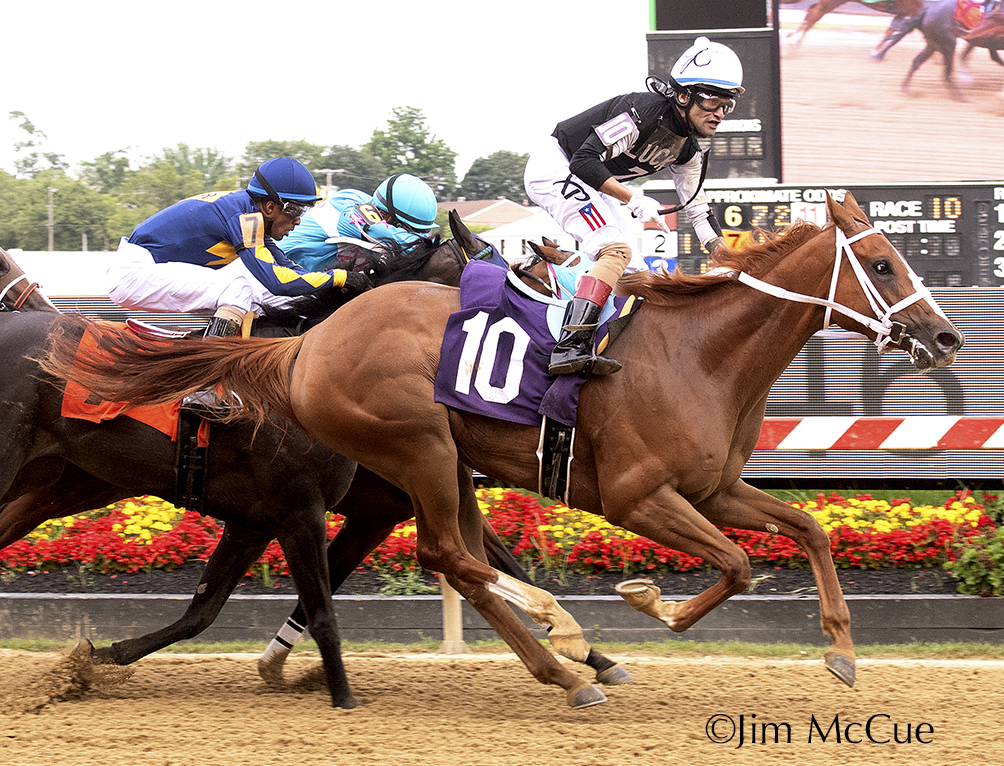 Despite hopping at the break, the Street Magician filly was quick to make her way up the outside as early leader Proper Attire flew around the far turn, just ahead of Malibu Beauty, to hit the opening quarter-mile in :22.43. Street Lute sidled up with Prodigy Doll, moving into third, as they turned for home and pursued the leading pair down the stretch. Moving out to the center of the track, Street Lute fired down the outside to beat out Malibu Beauty, with Prodigy Doll a nose back in third, as she finished the five-furlong off-the-turf test in :58 flat.

The Jerry Robb trainee kicked off her 3-year-old season with back-to-back wins in the Xtra Heat Stakes and Wide Country Stakes in January and February, pushing her win streak to five - all stakes. In March, she moved out of her sprint race comfort zone and was tested in the mile-long Beyond the Wire, where she finished third behind Littlestitious and Fraudulent Charge.

After taking the rest of March and April off, Street Lute returned for her graded stakes debut in the Miss Preakness-G3 on Black-Eyed Susan Day, finishing sixth in a field of eight after she was bumped from both sides at the break and faded down the stretch.

Her Stormy Blues victory squashed any doubts as the filly improved her record to eight wins, one second and one third, with $481,720 earned.

Winning her debut last September at Delaware Park, she quickly followed with a victorious stakes debut in the Small Wonder before moving on to Laurel Park and finishing second, by a neck, in the Maryland Million Lassie Stakes as the favorite. Three consecutive victories followed, in the Smart Halo Stakes, Maryland Juvenile Filly Champion Stakes and Gin Talking Stakes, more than enough to earn her the title of Maryland-bred champion 2-year-old filly.

Bred by Dr. and Mrs. Thomas Bowman and Dr. Brooke Bowman, Street Lute was purchased by Robb as a yearling for $10,500 out of the 2019 Fasig-Tipton Midlantic Eastern Fall sale. She is the second foal for her dam Alottalute, a daughter of Midnight Lute, and the mare’s only starter. Alottalute has an Editorial 2-year-old colt named Alottahope and the yearling filly Mama’s Eyes, a late May full-sister to Street Lute.