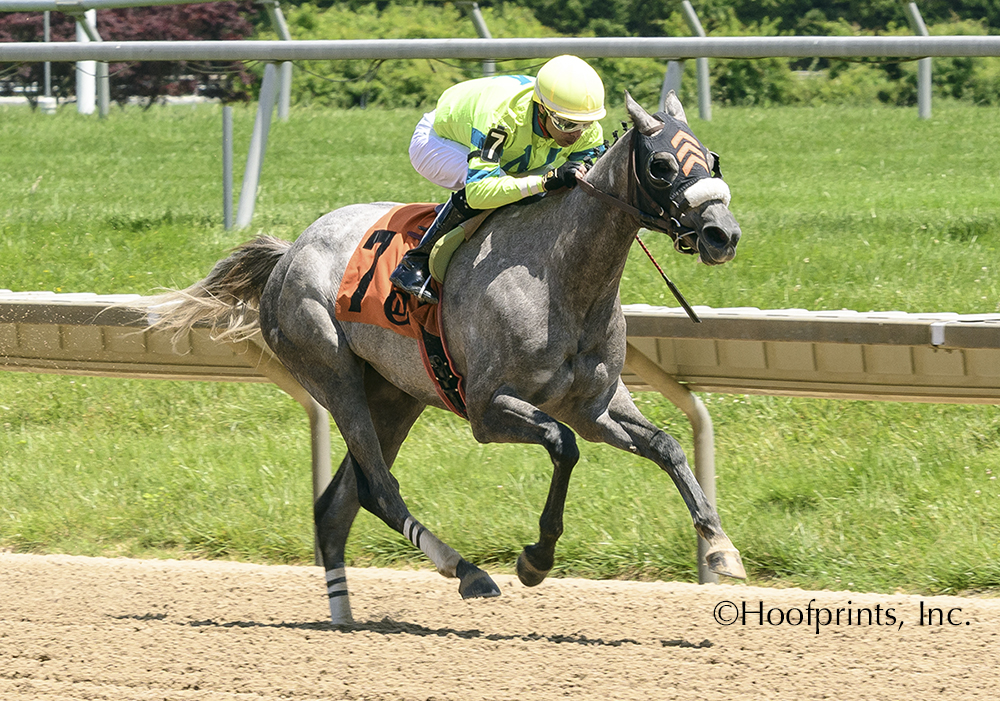 Show’em Who’s Boss, a gray/roan filly owned by M3 Racing Stable, was well prepared for her debut by trainer Andrew L. Simoff after posting five workouts at Delaware Park since May 1. Made the 8-5 favorite in the field of seven 2-year-old fillies, she survived a bump at the start, chased the early pacesetters from the five-path, rolled up to the leader as they rounded the far turn and had a daylight leading entering the stretch. From there she cruised home and was geared down at the finish, winning by five and a half lengths.

Bred in Maryland by Lady Olivia at Northcliff LLC, Show’em Who’s Boss is out of the Tapit mare White Eye Julia I, the dam of six winners from as many starters. The filly was purchased by M3 Racing Stable for $4,500 last October at the Fasig-Tipton Midlantic Fall Yearling sale.

Graded stakes-winning sprinter Holy Boss stood his first U.S. season in 2018 at Louis and Grace Merryman’s Anchor & Hope Farm in Port Deposit after retiring from the track in late spring 2017 and covering his first mares in Argentina that fall. A dual-hemisphere stallion in each of his four breeding seasons, the son of Street Boss has 43 2-year-olds in his first U.S. crop.

“There’s been a lot of buzz about Holy Boss the last few months once his kids starting making their way to the tracks, and I hope this proves rightfully so,” said Grace Merryman. “He has one of the best syndicates. They are great people who supported him in his first years to help get to this point. To be able to have his first starter be his first winner is exactly what they deserve.”

Holy Boss was tabbed a TDN Rising Star at 2 when taking his career debut at Churchill Downs by 10¼ lengths. Trained by Steve Asmussen for Jerry Durant for all but his last two career starts, Holy Boss recorded a four-race win streak early in his 3-year-old season including three straight stakes – Oaklawn Park’s Bachelor, Pimlico’s Chick Lang Stakes, both at six furlongs in 1:09 and change, and Saratoga’s Grade 2 Amsterdam, completing six and a half furlongs in 1:15.38, which earned a 102 Beyer.

From the spring of his 3-year-old season until he retired, Holy Boss raced exclusively in stakes. During that string of 15 races he won four stakes and had six stakes placings, including Grade 1s in the King’s Bishop and Alfred G. Vanderbilt Handicap at Saratoga, and was fourth in the Breeders’ Cup Sprint-G1, three and a half lengths behind Runhappy, Private Zone and Favorite Tale.

Holy Boss retired sound after a 22-start career in which he earned eight 100 or higher Beyer figures and $771,527. He is a half-brother to Canadian champion 3-year-old filly Holy Helena, a multiple graded winner of $1,330,018 who won Canada’s most prestigious race, the Queen’s Plate, against males at a mile and a quarter.