Brittany Russell-trained Whereshetoldmetogo reveled in Delaware Park’s sloppy track as he easily overtook Always Sunshine and won by four lengths in the $50,000 Alapocas Run Stakes, for 3-year-olds and up, on Saturday, July 3. 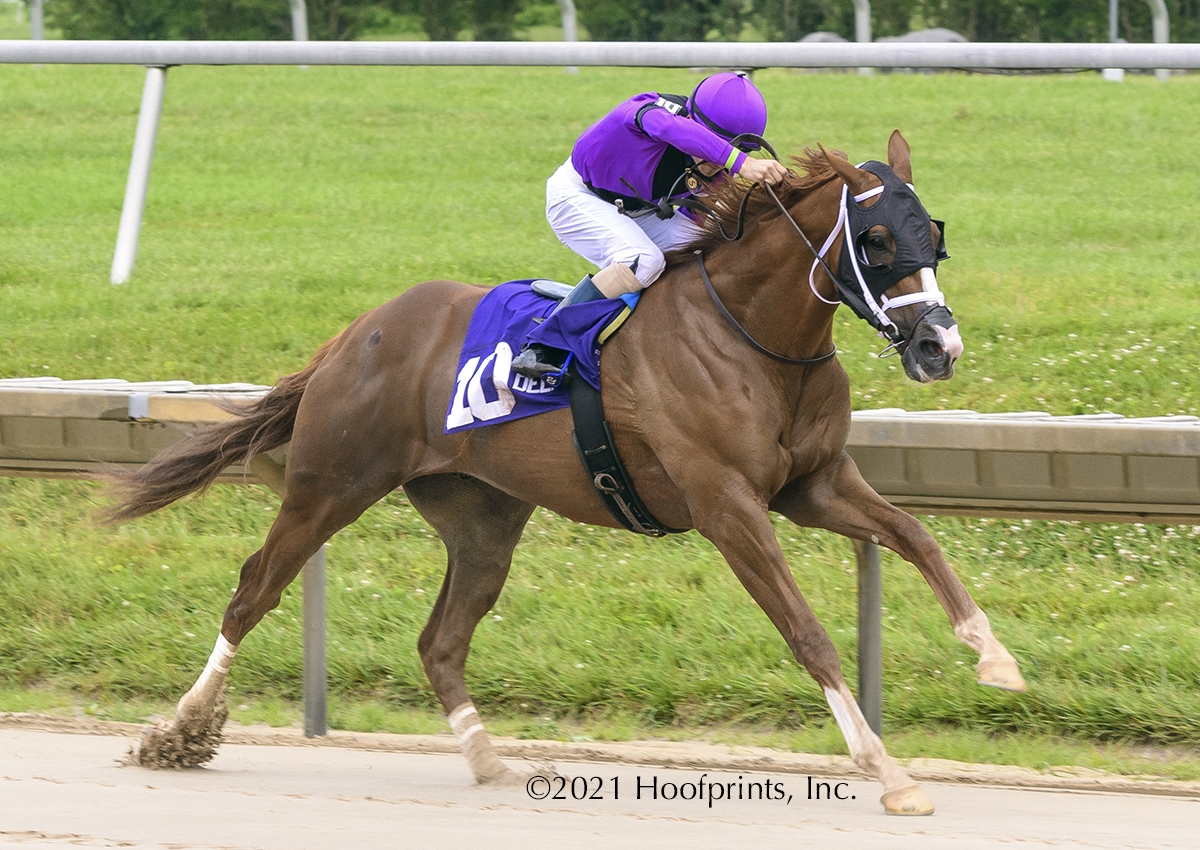 After a two-month hiatus, Whereshetoldmetogo went off the 6-5 favorite and settled into third behind Always Sunshine and Speightsford, who clocked an opening quarter in :22.47. Whereshetoldmetogo made his move from the outside as they approached the final turn and pulled away late stretch while finishing six furlongs in 1:10.89.

Originally campaigned by Black Cloud Racing (Mark Esposito), who purchased him for $7,000 as a yearling at the 2016 Fasig-Tipton Midlantic Eastern Fall sale, and trained by Anthony Pecoraro, the son of El Padrino won his debut at Delaware Park as a 2-year-old in 2017, and three starts later notched his first stakes win in the First State Dash. Ending the season with a second-place finish in the Smooth Air Stakes at Gulfstream Park, Whereshetoldmetogo returned in 2018 with a victory in the American Fabius Stakes, and picked up back-to-back wins in the Concern Stakes and Star de Naskra Stakes later in the summer, after which Esposito sold a majority interest of the Maryland-bred to a group led by Madaket Stables, including Ten Strike Racing and Michael E. Kisber. Whereshetoldmetogo went on to finish second to Firenze Fire in the Gallant Bob Stakes-G3 at Parx, where he made headlines as he tried to savage the winner as they neared the wire.

Transferred to the barn of trainer Brad Cox in 2019, he made four starts, with his best runs an allowance victory at Churchill Downs and a third-place finish in the Thanksgiving Classic Stakes at Fair Grounds that November. After an eight-month hiatus, Whereshetoldmetogo returned last July to finish third in the Iowa Sprint Stakes at Prairie Meadows.Transferred from Cox to Russell, he went on to finish fourth in the Polynesian Stakes, crossed the wire first in the six-furlong New Castle Stakes at Delaware in September but was disqualified to second behind Threes Over Deuces, and recorded back-to-back victories in the Frank Y. Whiteley Stakes and Dave’s Friend Stakes to close out his 5-year-old season.

Bred by David H. Wade, Whereshetoldmetogo is one of five winners from six starters for his dam Undisputed Legend, a daughter of Domestic Dispute. She has eight named foals and produced a colt by Mendelssohn this year, born Feb. 12.