Dark Hollow Farm’s 5-year-old homebred Ellanation battled to the end to reward her connections with a half-length victory in the $75,000 Jameela (for Maryland-bred/sired fillies and mares, 3 and up), her first stakes win, at Pimlico on Sunday, July 4. 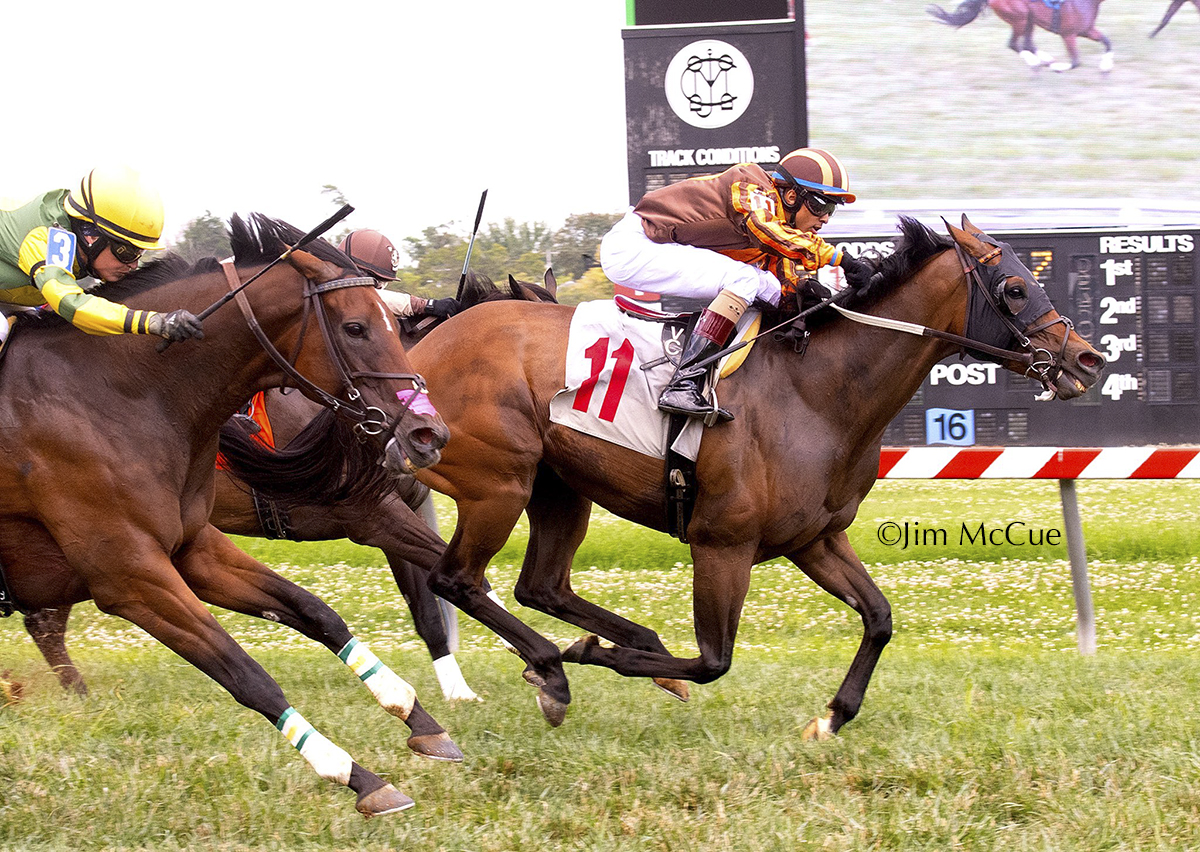 Making just her second career stakes start, Ellanation rated off the early pace in the five-furlong turf test as four fanned out in front of her through an opening quarter in :22.60 and half in 46.15. Midway down the stretch, the Mike Trombetta trainee charged between horses, gained the lead and then held off a late run by Dendrobia to win in :58.59.

“Mike [Trombetta] said she was doing really well, so that’s how she ended up in the race,” Dark Hollow’s David Hayden said. “We love the family, we love her, so we’re very, very excited and thrilled now, I can tell you.”

Dark Hollow consigned the daughter of Alternation as a weanling in the 2016 Keeneland November Breeding Stock sale, where she sold to E.N.S for $32,000. She went through the ring at the 2018 OBS Spring 2-year-old sale, and though Dark Hollow attempted to buy her back, her price went above their budget as she sold for $160,000 to Loudmouth Racing.

With all five of her juvenile starts coming at Laurel Park, Ellanation debuted that August and finished fifth after contesting the pace. She then notched back-to-back second-place finishes before breaking her maiden by a nose in a six-furlong waiver maiden claimer (no tag) that November and wrapped up her season with a second in her first allowance.

She made five starts at 3, won twice – at Woodbine and for a $30,000 tag at Aqueduct – and finished last of four in her only other stakes attempt, the Blue Sparkler Stakes at Monmouth at five and a half furlongs on the turf, although only four lengths behind the winner.

After finishing fourth in her only start of 2020, a January allowance at Laurel, she was found to have a chip in her knee. It was then that bloodstock agent Nick Sallusto, who bought the filly for Loudmouth back in 2018, called Hayden to see if he wanted to buy her back. After agreeing to the price of $8,000, Ellanation underwent surgery to remove the chip and spent some time recovering at the farm before returning to training with Trombetta at Fair Hill. She made her first start back in early April, finishing sixth, before finishing fifth in back-to-back allowance races at Pimlico and Delaware Park prior to the Concern at Laurel.

The mare’s first stakes win boosted her earnings to $178,269, with a record of four wins, four seconds and a third from 15 starts.

Ellanation is a second-generation Dark Hollow homebred out of the Dixie Union mare Memories of Mystic, whose dam Mystic Dance (Nepal) was claimed by the Haydens in October 1995 for $25,000. Memories of Mystic produced seven foals for the Haydens (and partners), five of them winners including additional stakes winners Mystic Love (Not For Love) and Bridget’s Big Luvy (Tiz Wonderful).

Dark Hollow Farm consigned Memories of Mystic to the 2016 Keeneland November Breeding Stock sale, in foal to Bodemeister, where she sold for $100,000 to K.O.I.D. They plan to keep Ellanation as a broodmare once she finishes her racing career.