Knicks Go back on top with Cornhusker victory

Korea Racing Authority’s Knicks Go returned to his winning ways with a standout performance in the $300,000 Prairie Meadows Cornhusker Handicap-G3, leading gate-to-wire to win by 10 1/4 lengths on Friday, July 2 at Prairie Meadows. 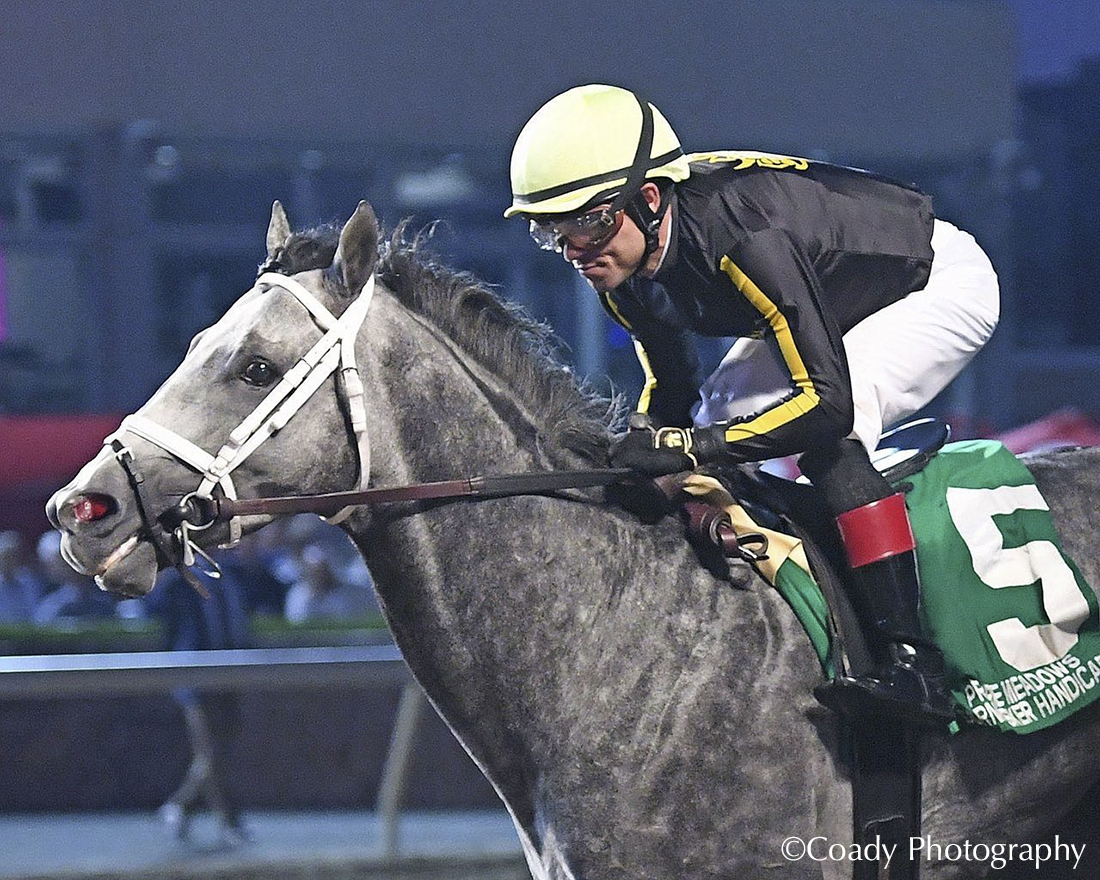 Sent off as the 3-5 favorite, Knicks Go and Last Judgment broke in sync before Knicks Go kicked it up a notch to take the early lead as he hit the opening quarter-mile in :23.33. Last Judgment continued his efforts to bridge the gap between himself and the favorite as they flew through the opening half in :47.02 and three-quarters of a mile in 1:10.77 before turning for home. Down the stretch, Knicks Go propelled ahead to finish the one and one-eighth miles in 1:47.33, with Last Judgment second and Rated R Superstar a half-length back in third. His 113 Beyer was the best of any horse in the country this year.

The 5-year-old son of Paynter redeemed himself from his two previous starts, back-to-back fourth-place finishes in the $20 million Saudi Cup-G1 (Feb. 20) at King Abdulaziz Racecourse and the $1 million Metropolitan Handicap-G1 at Belmont Park (June 5). He had kicked off this season with an easy two and three-quarter-length score in the $3 million Pegasus World Cup Invitational Stakes-G1 at Gulfstream Park in January, the third Grade 1 victory of his career.

Starting off his career under the guidance of trainer Ben Colebrook, Knicks Go broke his maiden on debut at Ellis Park on July 4, 2018, before taking the Claiborne Breeders’ Futurity-G1, at 70-1, by five and a half lengths at Keeneland and finishing second to Game Winner in the Breeders’ Cup Juvenile-G1 at Churchill Downs that fall.

Winless in eight starts at 3, Knicks Go was transferred to trainer Brad Cox’s barn and returned to the winner’s circle in his 4-year-old debut, winning a mile and a sixteenth allowance at Oaklawn Park in February 2020. The streak of success continued with another allowance win, where he set the track record (1:40.79) for the same distance at Keeneland in October, before he returned to the Breeders’ Cup stage and gave the performance of a lifetime in the Dirt Mile-G1. Winning by three and a half lengths over Jesus’ Team, the Maryland-bred set another track record at Keeneland as he finished the mile in 1:33.85. His impressive season earned him the title of 2020 Maryland-Bred Horse of the Year, along with champion older male honors.

Bred by Sabrina Moore and Angie Moore, the gray was sold as a weanling for $40,000 to Northface Bloodstock at the 2016 Keeneland November Breeding Stock sale and later returned to the sales ring as a yearling at Keeneland September, where he was purchased for $87,000 by his current owner.

Knicks Go is one of six Maryland-breds produced by Maryland-bred Kosmo’s Buddy, a stakes-winning daughter of Outflanker out of an Allen’s Prospect mare who has four winners from five starters. The most recent is Knicks Go’s 3-year-old half-brother Cosmicality, who broke his maiden at Pimlico on the July 4th card.

After she RNA’d for $195,000 at the 2018 Fasig-Tipton Kentucky fall mixed sale, Kosmo’s Buddy was purchased by Park for a client and later sold to Sallusto and Albina for Newnanner Stud Farm in Versailles, Ky., where she now resides. Her most recent foals are fillies by Justify (2020) and Ghostzapper (2021).