Classic-placed Divining Rod, a son of Tapit standing at Country Life Farm in Bel Air, got his first winner from his first crop when Carnaval Conquest led throughout and drew off for a four and three-quarter-length win at Fanduel Sportsbook And Horse Racing (Fairmount Park) in Illinois on July 6. 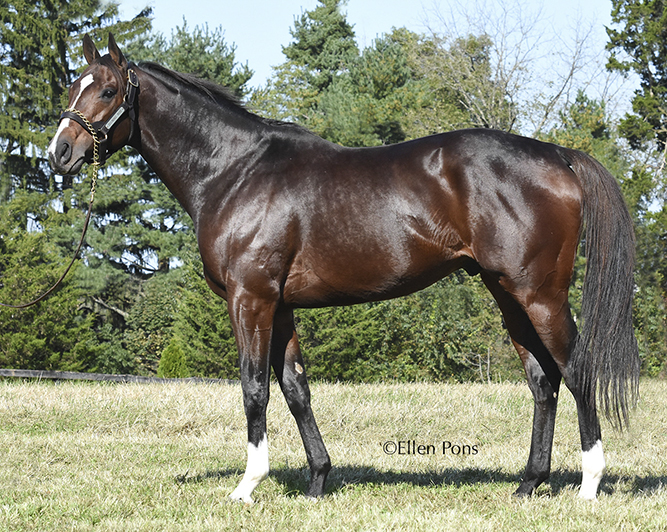 The 2-year-old colt, bred in Illinois by Mary Obermier and racing for GAB Secret Acres, was making his first start in the four and a half-furlong maiden special weight after turning in strong works for trainer Gabe Retana. He is out of the winning Henny Hughes mare Queen Nine, who was owned by Eclipse Award-winning breeders Ken and Sarah Ramsey at the time she was bred to Divining Rod.

Divining Rod has 68 registered foals in his first crop. He boasts one of the most dynamic female lines in the world, as he is out of Grade 1 winner and $1,912,543-earner Precious Kitten, a half-sister to the Ramseys’ champion and two-time leading sire Kitten’s Joy. Precious Kitten won six graded stakes, including the Grade 1 Matriarch, John C. Mabee and Gamely. Divining Rod was his dam’s first starter, and finished in the money 14 of 17 times while earning $882,604. He is a full brother to graded stakes-winning filly Jehozacat.

A winner in his debut at 2, Divining Rod finished third behind Triple Crown winner American Pharoah in the Preakness-G1 after kicking off his sophomore season with two graded placings in his first two stakes starts and a win in Keeneland’s Lexington Stakes-G3. In seven starts at 3, all stakes, he finished in the top three six times.
At 4, Divining Rod missed winning the $500,000 Grade 1 Cigar Mile by a head to Connect. At 5, he ran seven furlongs in 1:22.07 when winning the Polynesian Stakes. Other stakes placings included a second to eventual Cigar Mile-G1 winner and Breeders’ Cup Dirt Mile-G1 runner-up Sharp Azteca in the Grade 2 Kelso Handicap at one mile.

Divining Rod was the most popular stallion in Maryland his first year at stud, covering 102 mares, according to The Jockey Club’s Report of Mares Bred. He stands at Country Life for a live foal fee of $5,000.