Copper Penny Stables’ homebred Trifor Gold held on to win the $50,000 Sussex by a nose and notch his first stakes victory over fellow Maryland-bred Cannon’s Roar in the race for Delaware-bred or certified runners at Delaware Park on Thursday, July 8. 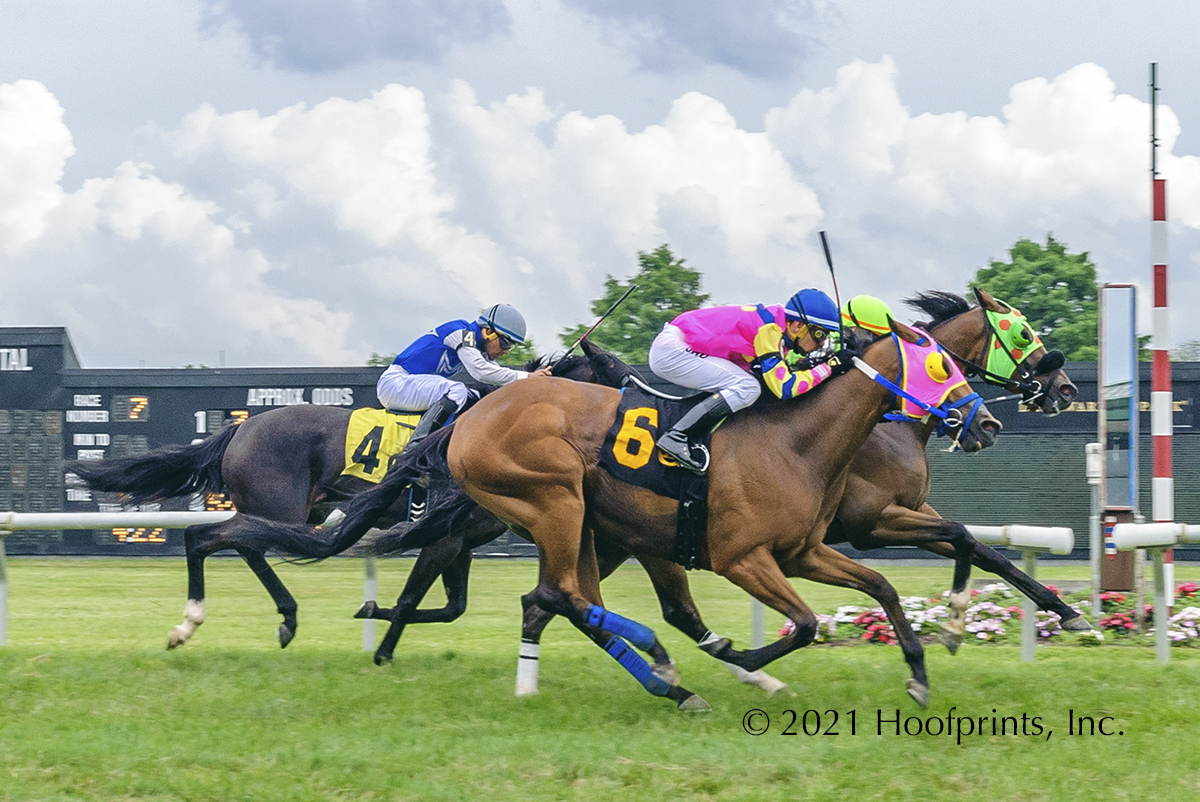 Making his first stakes start at Delaware since finishing seventh in the New Castle last September, Trifor Gold broke quickly to the lead just to the outside of Samedi Night as the pair led through a quarter in :23.53. As Trifor Gold pulled ahead through a half-mile in :46.20, Samedi Night began to fade and Taxable Goods moved up to pressure the leader from the outside. Turning for home, Trifor Gold held on as even-money favorite Cannon’s Roar made a run from the inside and Market Mover burst forward from the outside, to no avail. The Mark Shuman trainee finished the seven and a half furlongs on the turf in 1:29.19.

It was the 5-year-old Tritap gelding’s first stakes victory in seven attempts, and boosted his earnings to $184,059 from a record of four wins, four seconds and three thirds in 27 career starts.

Winning his 2-year-old debut by two lengths in a six-furlong waiver maiden claimer (no tag) at Laurel in November 2018, Trifor Gold made his stakes debut in his second career start, finishing sixth in the Maryland Juvenile Futurity. The following year, he was winless in 13 starts, but hit the board five times, including a second in the Federico Tesio Stakes at Laurel. He also finished fourth in the Sir Barton Stakes at Pimlico.

It wasn’t until last September that he found the winner’s circle again, in his third start as a 4-year-old, with a length and a quarter victory in a $42,000 allowance at Delaware.

This year, he kicked off the season with a head victory in a $25,000 claimer at Penn National going six furlongs on the main track, and made three more starts before finishing second by a head in a stretch battle in a mile and a sixteenth optional claimer at Pimlico in June. Next out was the Sussex, which was only his third start on the grass.

Trifor Gold is the seventh foal out of the Gold Tribute mare Gold Scammer. She has produced 10 foals, with six winners from seven starters, including stakes-placed Ravenesque. Gold Scammer’s youngest include the 2-year-old gelding Mercury Ten, and a yearling filly, both by Bourbon Courage.