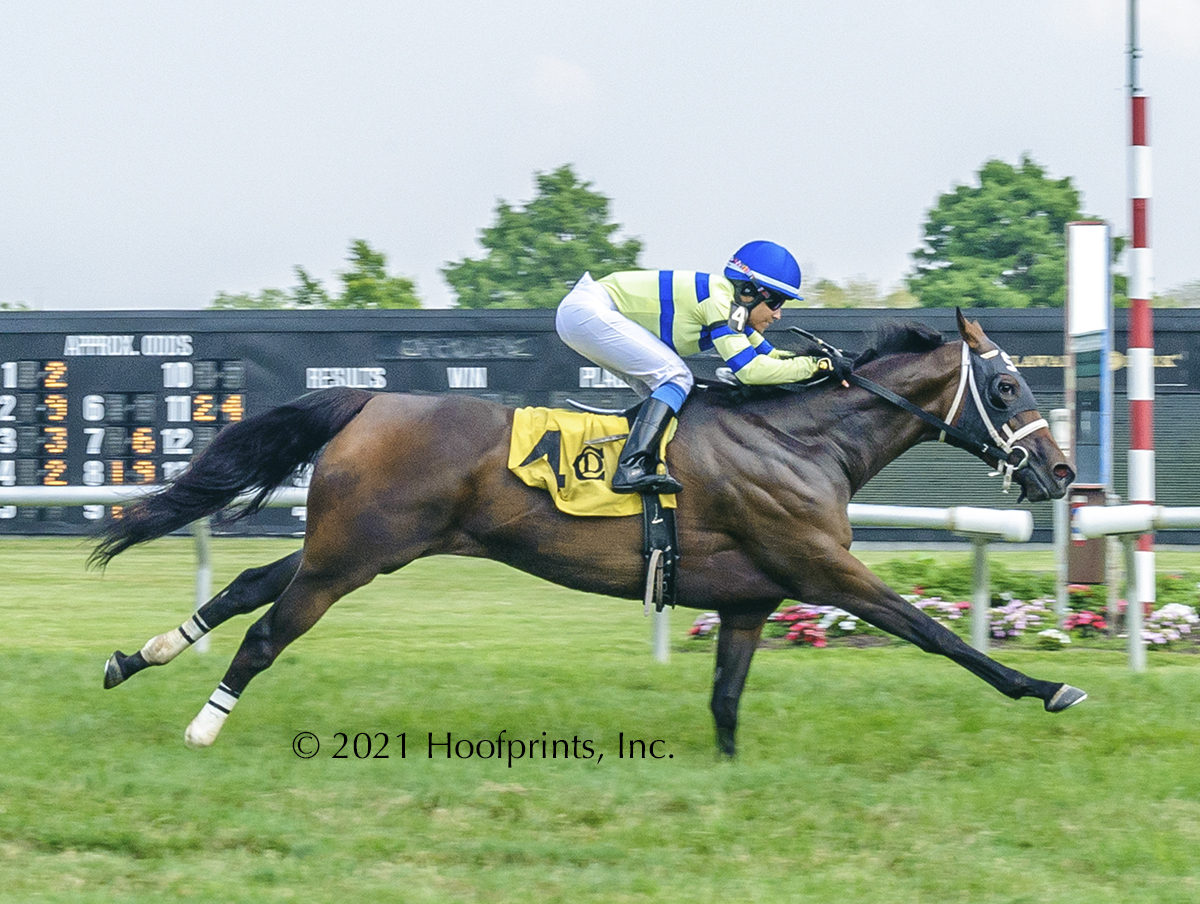 It was a Maryland-bred sweep in the midweek stakes for Delaware-bred or certified fillies and mares. Rising Bella came into the race off a two-length score in a $35,000 claimer at Belmont June 18, where she finished a mile and a sixteenth on the turf in 1:40.36, one of the fastest times for the distance during the track’s spring meet.

Rising Bella settled mid-pack as she floated in fifth and sixth position while Miss Tap Dance led the group through an opening quarter-mile in :24.44. Moving out as they hit a half in :47.64, Rising Bella kicked it into high gear down the center of the track, caught new leader Mosalah and a determined Buff’s in Love. The Steve Klesaris trainee stopped the clock at 1:29.26 for seven and a half furlongs on the turf.

Sold for $17,000 as a yearling in the 2018 Fasig-Tipton Midlantic Eastern Fall sale, Rising Bella was purchased by Black Cloud Stable and made her first eight starts for the stable. The Munnings filly broke her maiden at 2 in her second career start by four and a half lengths, going five and a half furlongs on the dirt at Delaware in August 2019. In her third start, she switched to turf for her stakes debut in the $100,000 Sorority at Monmouth Park, where she finished second, just one and three-quarter lengths behind eventual graded stakes winner Micheline. In her next start, the Selima Stakes at Laurel Park, she finished fifth behind Sharing, who captured the Breeders’ Cup Juvenile Fillies Turf-G1 next time out.

In search of the winner’s circle, Rising Bella was slowly dropped in the claiming ranks and recorded her second win in her 3-year-old debut, a one-mile turf test at Gulfstream, where she was taken for $35,000 by her current connections. She made just two more starts last year, one a fifth-place finish in Gulfstream’s Mrs. Presidentress Stakes, and was away from the races for 364 days.

Bred by Timothy Rooney out of the Smart Strike mare Striking Bella, she is the fourth winner from five starters for the Rooney-bred mare, who has also produced stakes-placed Sunrise Sunset (City Zip) and $158,517-earner Velocita Brillante. Striking Bella foaled a Goldencents filly April 25.