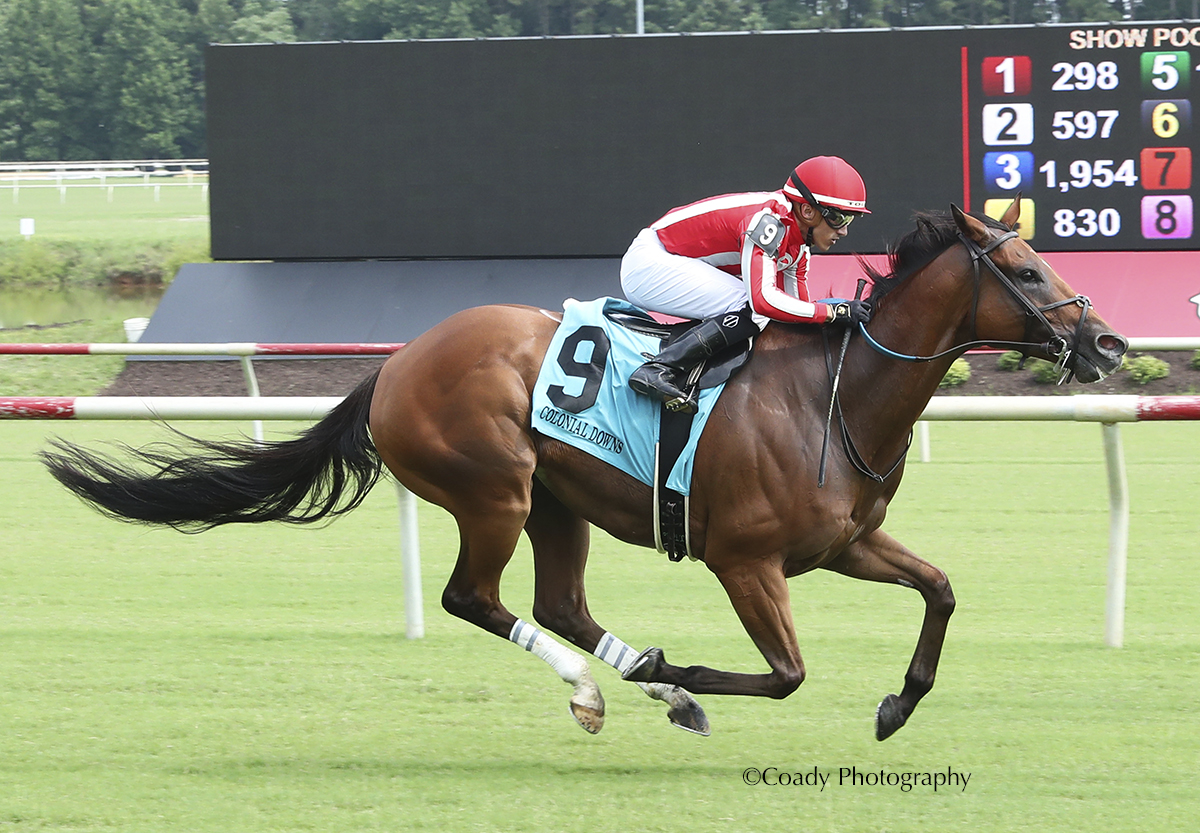 Sent off as the 2-1 favorite in a field of 10 contenders in the stakes for 3 and up, Grateful Bred settled to the outside as Gale Winds took over the early lead, moving through an opening quarter in :21.30. As they neared the final turn, Grateful Bred opened up four-wide and took over down the stretch, hitting a half-mile in :44.04 as he propelled himself to victory.

The 5-year-old gelded son of Great Notion finished the five and a half furlong-test on the outer turf in 1:02.45 as he improved his overall record to 4-1-0 from eight career starts, with $159,765 earned.

“It’s pretty important and exciting to get my first stakes win,” said Meyers, who had previously been involved with steeplechase racing before switching to the flat. “I can’t thank Mr. Keys enough for giving me a chance with a horse like this. We only have a handful of horses, so for him to leave him with me and let us go down this route is very special. He won a Maryland-bred allowance four weeks ago and this was the goal, so we worked him once in between.”

The horse has been special to his owner since the beginning, with his name picked by Keys’ son David as a tribute to him and his mother Robin’s favorite band, the Grateful Dead, now called Dead & Company.

Making his first start of the year June 19, Grateful Bred faced off against eight other Maryland-bred/Maryland-sired contenders as he won the five-furlong turf allowance at Pimlico by two and a half lengths, in a final time of :58.32.

“The horse is Maryland-bred and Virginia-Certified, and we want to support both programs. We moved to Virginia eight and a half years ago, bought a house and just had a baby, so we’re pretty settled here now,” said Meyers.

After finishing fourth in his career debut as a 3-year-old in October 2019, Grateful Bred took a nearly eight and a half-month break before returning to the track last July and breaking his maiden by three and a half lengths as a 21-1 longshot, going five and a half furlongs on the turf in 1:02.76. He returned in August to make two allowance starts at Laurel, finishing second and sixth, respectively, before picking up a second career victory in late September at Pimlico, winning again by daylight going five furlongs on the turf.

The final start of his 4-year-old season came last October on Maryland Million Day at Laurel Park in the Maryland Million Turf Sprint, where Grateful Bred finished fourth in his stakes debut.

The sixth winner produced by Malibu Moment, a daughter of Malibu Moon purchased by Keys for $21,000 as a yearling at the 2003 Fasig-Tipton Midlantic Fall sale, Grateful Bred is his dam’s first stakes winner. All seven of her foals are starters, with progeny earnings totaling $418,944 as of July 20.