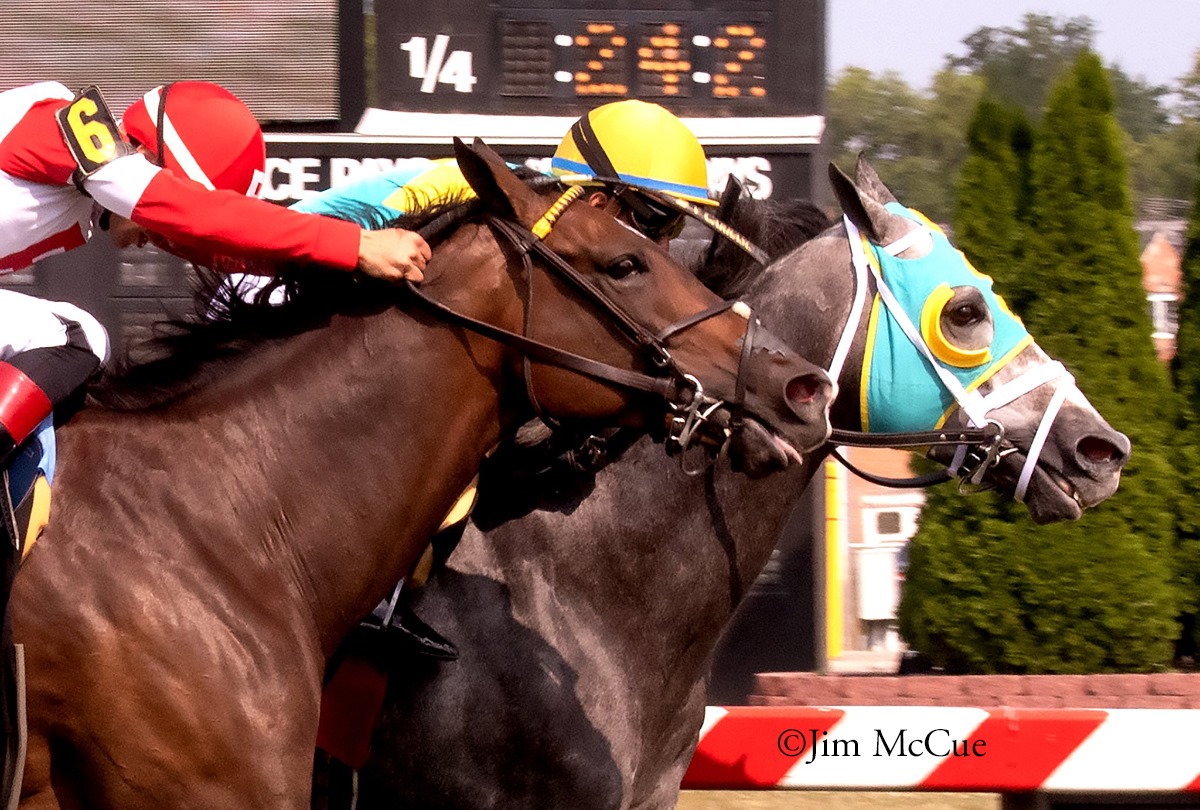 Making his fourth graded start of the season, Field Pass went off the favorite in the scratched down field of four. He found his place along the inside rail as Ramsey Solution flew from the gate to grab the lead and proceeded to post pedestrian opening fractions for the 1 mile on firm turf of :24.59 and :48.33. Sitting in third and waiting for room as they turned for home after three-quarters in 1:11.55, Field Pass took advantage of a slight opening when Ramsey Solution drifted out and started to push his way through. Ramsey Solution however wasn’t done and moved back down towards the rail, making it tight for the favorite. With Ramsey Solution not giving an inch, Field Pass managed to squeeze through and got up just before hitting the wire in a final time of 1:35.12.

“We’re obviously happy with the win. We had a few anxious moments there, but we’re happy he got through and got there,” trainer Mike Maker said by phone from Saratoga. “There weren’t a whole lot of instructions. We basically said, ‘He’s the class of the field, get to the wire first,’ and they did.”

It was the 4-year-old gelding’s first victory this year. He kicked off his season in April at Keeneland in the Maker’s Mark Mile Stakes-G1, finishing fourth. He was last of eight in the Man o’ War Stakes-G1 at Belmont Park in May and was beaten two lengths when fourth in the Wise Dan Stakes-G2 at Churchill Downs in June.

The son of Lemon Drop Kid finished second in his debut as a 2-year-old at Churchill in June 2019, but made up for it in his second start a month later when breaking his maiden by three-quarters of a length at Saratoga. In August, Field Pass finished second by a length to Fighting Seabee in the With Anticipation Stakes-G3, his graded stakes debut. His final three starts of the year included back-to-back fourth-place finishes in the Laurel Futurity and Dixiana Bourbon Stakes-G3.

Last year, Field Pass won his first stakes in his first start of the season as he scored by a neck in the Dania Beach at Gulfstream Park in February and quickly followed with his first graded stakes victory in the Jeff Ruby Steaks-G3 at Turfway Park the following month, winning by a neck over Invader as he finished the one and one-eighth miles on the all-weather track in 1:49.34. After a third in the War Chant Stakes, he continued to pad his resume with back-to-back victories in the Audubon Stakes at Churchill and Transylvania Stakes-G3 at Keeneland.

Field Pass finished seventh in the Saratoga Derby Invitational Stakes last August, but it wasn’t as bad a race as it as it appears, as he was only three lengths behind winner Domestic Spending (GB), the current top-ranked turf horse in the country on the NTRA’s weekly Top Thoroughbred Poll.

It’s been graded stakes ever since. Traveling the country, Field Pass had consecutive third-place finishes in the American Turf-G2 at Churchill and Twilight Derby-G2 at Santa Anita before returning to the winner’s circle in the Ontario Derby-G3 at Woodbine in late November. He was fourth, beaten just over a length, in the Mathis Brothers Mile Stakes-G2 at Santa Anita in December to close out the year.

Bred by Mark Brown Grier, the gray/roan was sold for $37,000 as a yearling to Owls Bloodstock at the 2018 Fasig-Tipton Midlantic Eastern Fall sale. Field Pass is one of two winners from three foals for his dam Only Me, by Runaway Groom.