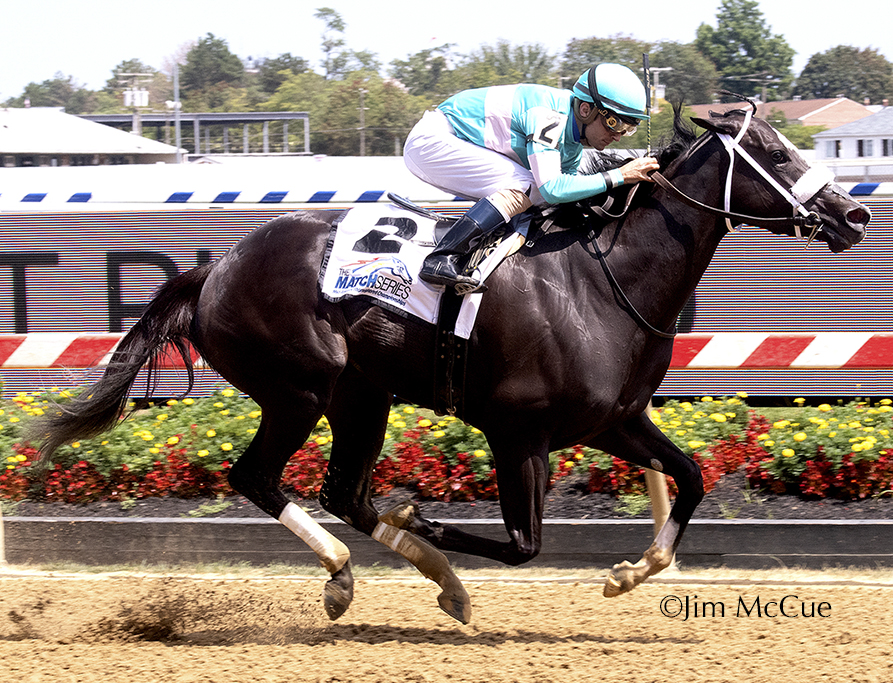 Sent off as the 1-10 favorite in a field of five, the 4-year-old Golden Lad filly broke quickly to the lead as she raced through an opening quarter-mile in :23.41. As 11-1 third choice Call On Mischief attempted to put pressure on as they turned for home after a half in :45.84, Hello Beautiful shook loose and powered down the stretch to win by three and three-quarter lengths as she finished the six-furlong test in 1:09.63. Precious finished a neck behind Call On Mischief in third.

“It’s always anxious because she means so much to us and she’s been so good,” jockey Sheldon Russell said. “As soon as she got the first quarter I knew that she was in her happy place and it was cruise control from there. The final time was extremely impressive. She’s a good filly.

“I’m just very happy that we got it out of the way, and for it to happen on Hello Beautiful. She’s been a great filly throughout my career, she’s given me some great wins,” he added. “She was mine and Brittany’s first stakes winner together, so for me to reach a milestone on one of our favorite fillies, it’s something I’ll never forget.”

Hello Beautiful kicked off her season this January with a length victory in the What a Summer Stakes at Laurel Park as she continued her win streak started last fall, including an 11 1/4-length victory in the Maryland Million Distaff in October and a three-length score amongst open company in the Safely Kept Stakes in November. In February, the filly finished fifth in the Barbara Fritchie-G3, her second graded stakes start.

After a nearly four-month layoff, she returned in June for the Shine Again Stakes, where she took over the lead early and led throughout until a stretch duel with Pennsylvania-bred Chub Wagon resulted in Hello Beautiful begrudgingly settling for second, beaten by a neck.

“The question was always is she a horse for the course at Laurel and she’s run two big races at Pimlico now so it’s good that she can run on a different surface, as well. It feels great,” Brittany Russell said.

Breaking her maiden in her third start as a 2-year-old in 2019, the filly stepped up to stakes company just two starts later as she won the Maryland Million Lassie by three and three-quarter lengths, finishing the six furlongs in 1:10.33, and quickly followed up with an 11 3/4-length win in the Maryland Juvenile Filly Championship Stakes, moving up to seven furlongs in 1:22.43, to close out the year.

With last year’s racing schedule marred by the pandemic, Hello Beautiful didn’t return until last June, where she finished seventh in a five and a half-furlong allowance on the turf before reuniting with Laurel’s dirt track for an eight and a quarter-length allowance victory. She then shipped out of state for a start in the Audubon Oaks at Ellis Park, where she finished 11th, and followed with a sixth-place finish in the Prioress Stakes-G2 at Saratoga in September before returning to Laurel for Maryland Million Day in the fall.

In her 16 career starts, Hello Beautiful holds a record of eight wins, three seconds and one third with $464,610 earned.

Bred by Hillwood Stables, she was purchased by Russell for $6,500 as a yearling out of the 2018 Fasig-Tipton Midlantic December Mixed sale. Hello Beautiful is one of three starters for her dam Hello Now, a daughter of Tiznow whose other winner is 3-year-old Hello Hot Rod (Mosler). A stakes winner this year when he captured the Jimmy Winkfield Stakes at Aqueduct in January when owned and trained by Russell, Hello Hot Rod was sold after that race for $335,000 at the Fasig-Tipton Kentucky February Mixed Sale.

Hello Now, now owned by Holly House Farm, has a yearling full-sister to Hello Beautiful and was bred to Hoppertunity for 2022.