GMP Stables, Arnold Bennewith and Cypress Creek Equine’s Harpers First Ride got back to his stakes-winning ways in the $100,000 Deputed Testamony Stakes, a race he won last September at Laurel Park. In this year’s running, held on Saturday, July 31 at Pimlico, he scored by one and a half lengths. 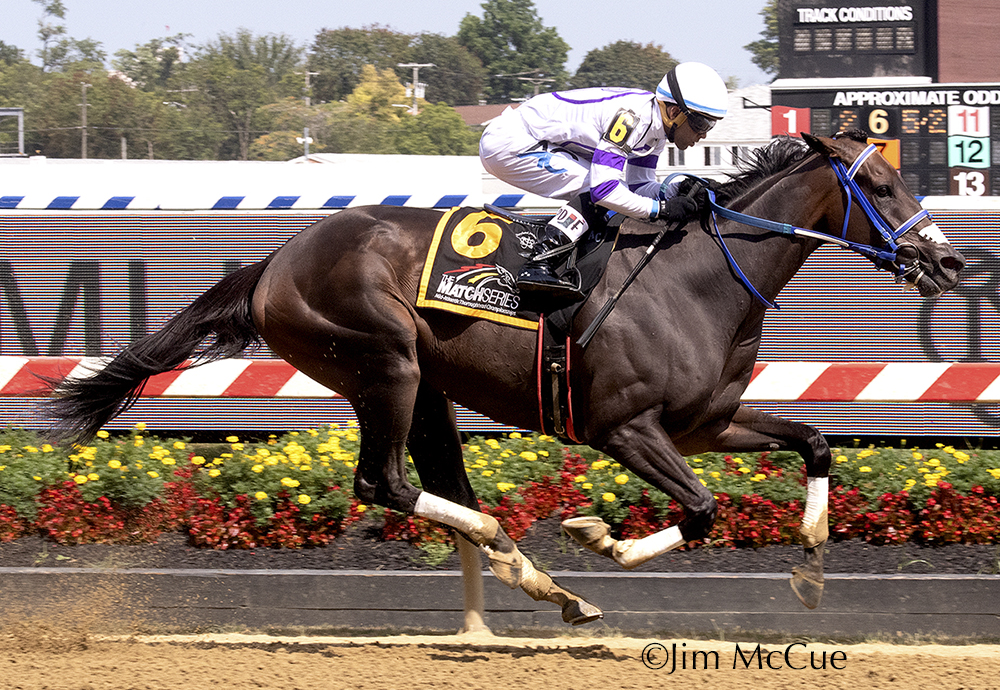 Harpers First Ride came in off a late June victory in a one and one-sixteenth mile allowance at Pimlico (which incidentally Deputed Testamony still holds the track record of 1:40.80 for the distance), his first win in five starts since January. He broke quickly to the front and found his place along the rail as he led five rivals through an opening quarter-mile in a dawdling :25.38. Cordmaker took over as the field headed up the backstretch, getting the half in :49.34 as Harpers First Ride continued to challenge from the inside. Seemingly a match race between the leading pair, Harpers First Ride opened up around the three-quarters of a mile mark and blazed ahead down the stretch to outlast a late run from slight favorite Magic Michael, hitting the wire in 1:49.52 for the mile and an eighth.

It was the 5-year-old Paynter gelding’s fifth stakes victory under the guidance of Claudio Gonzalez, who began training the 3-year-old after claiming him for $30,000 at Churchill Downs in September 2019 for owner Robert D. Bone. That race was a maiden-breaking effort in his third career start for breeder Sagamore Farm. Moving up to the allowance level at Laurel Park that fall, Harpers First Ride won his next two starts.

He kicked off 2020 with a win in a one-mile allowance at Laurel by a neck in January, then went on an incredible run. In 11 starts last year, the dark bay won seven times, was second twice and third once while banking nearly a half-million dollars.

Harpers First Ride made his first start in the colors of owner MCA Racing Stable last June, an allowance win at Laurel by four lengths, added another allowance win in July and took a huge jump up to graded stakes company in Monmouth Cup Stakes-G3 a few weeks later where he finished fifth. He was first or second in his next six starts, five of them stakes, which included back-to-back scores in the Deputed Testamony, which he won by three and a quarter lengths over Cordmaker, and his first graded stakes in the Pimlico Special-G3 in October.

Following a runner-up finish to Monday Morning Qb in the Maryland Million Classic, Harpers First Ride fired up again with a three-length victory over Cordmaker in the Richard W. Small Stakes in November and a three and a half-length win in the Native Dancer Stakes in December.

Sold privately over the winter to his current connections, the gelding ran 12th in the Pegasus World Cup Invitational Stakes-G1 this January before he was transferred to the barn of trainer Robertino Diodoro. After two runs at Oaklawn Park, where he finished fourth in the Essex Handicap in March behind Silver State and third in an allowance in April, Harpers First Ride returned to his home state for the Pimlico Special-G3, where he finished 10th before being transferred back to Gonzalez.

“This horse, you have to ride him for him to give you everything,” Gonzalez said. “It’s a good feeling. I believe he is going the right way.”

He is the second foal out of Polyester, a daughter of Tiz Wonderful purchased by Sagamore Farm as a yearling for $130,000 in 2011. Polyester never started, but her first three foals bred by Sagamore are winners, including $161,110-earner Route Six Six (by Quality Road), a $200,000 Keeneland September sales yearling. Sagamore sold the mare, in foal to Quality Road, for $90,000 at the 2018 Keeneland January sale – that foal, a filly named In a Dream, is also a winner.