Bird Mobberley LLC’s Local Motive showed plenty of motivation as he clinched his stakes debut in the $100,000 Hickory Tree, for Virginia-restricted 2-year-olds, by a half-length over Roll Dem Bones at Colonial Downs on Monday, Aug. 2. 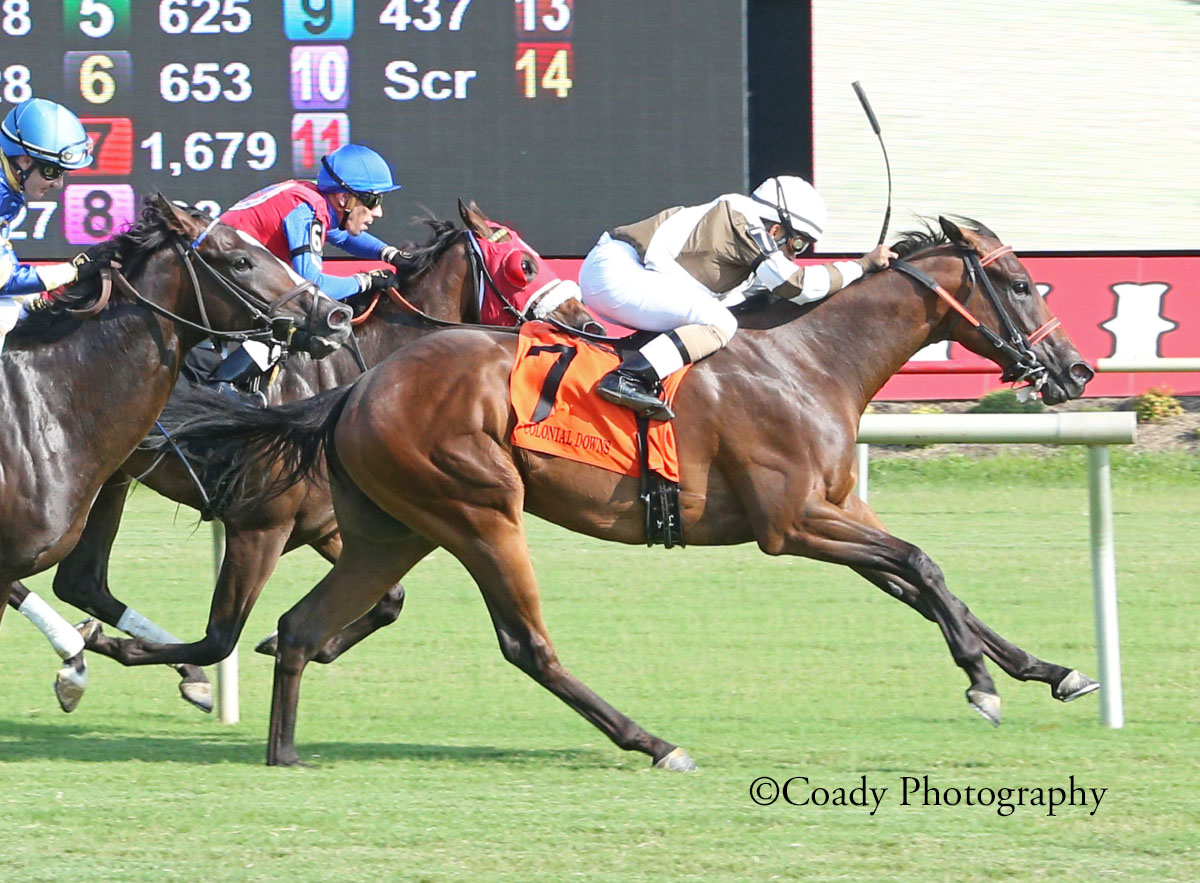 Going for his second win in 10 days, Local Motive started off mid-pack but didn’t stay there long as he cruised up the outside as the field made their way into the far turn, after Roll Dem Bones set an opening quarter-mile in :22.28. Local Motive pursued Roll Dem Bones down the stretch before pulling ahead to finish five furlongs on the turf in :57.52.

“I’m not so sure he took to the turf as well as it looked,” said trainer John Salzman Jr. “It was a little bit of an easier race today. I hate having to change courses. I don’t think it’s fair to the horses but we had to try. I almost didn’t run this horse back because it was a quick turnaround. It’s not my style. But if you skip it, what are you going to do. It worked out for us.”

The colt made his debut on the dirt in a six-furlong Maryland-bred waiver maiden race at Pimlico July 24, where he drew off by four and a quarter lengths as the favorite. In his two starts, he’s earned $86,910.

Local Motive is the first stakes winner for his freshman sire Divining Rod, who stands at Country Life Farm in Bel Air, as well as the first stakes winner for the Wasabi Ventures Stables LLC breeding program, which bred him in partnership with Greenspring Mares LLC and Bowman and Higgins Stable. He is the third winner from three starters for his dam Wild For Love, a daughter of Not For Love who earned $187,292 and captured the 2015 Maryland Million Distaff Starter Handicap. His second dam Sticky (by Concern) was also a Maryland Million winner (the 2005 Oaks) as well two other stakes; his third dam Hair Spray won three stakes, including the Grade 2 Safely Kept, and was six times stakes-placed in 1998.

Wild For Love has a yearling filly by Great Notion, foaled a Maximus Mischief filly late this March and was bred back to Lord Nelson for 2022.