Korea Racing Authority’s Knicks Go never looked back as he surged to the lead in the 94th running of the Whitney Stakes-G1 and delivered a monstrous gate-to-wire victory, by four and a half lengths, at Saratoga on Saturday, August 7. 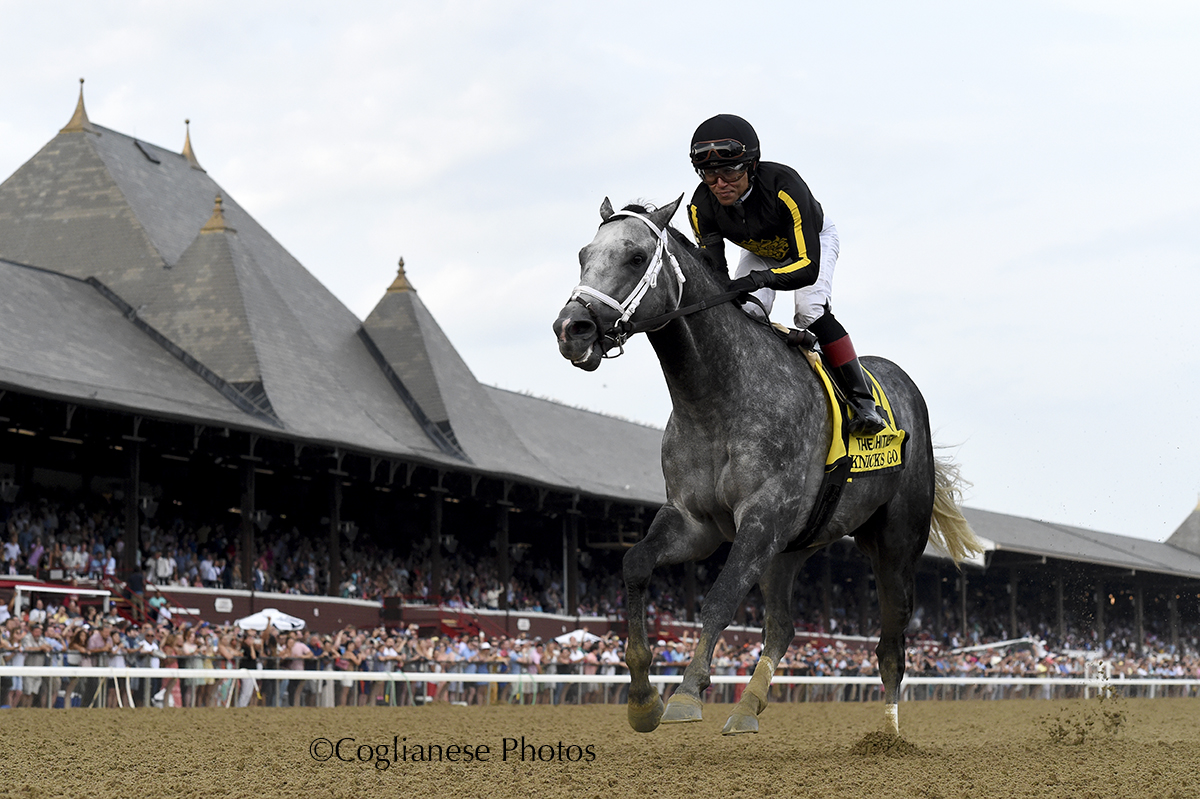 Sent off as the even-money favorite in the stellar five-horse field, Knicks Go sprung to the lead and opened up by five lengths ahead of Swiss Skydiver, running in second, with Maxfield settling in the third spot, through an opening quarter-mile in :23.42. As the rest of the field chased the early leader up the backstretch, hitting a half-mile in :46.76, Swiss Skydiver attempted to close in from the outside as they neared the turn for home. Knicks Go drifted out to the center of the track straightening into the stretch as Metropolitan Handicap-G1 winner Silver State charged up the rail and Maxfield and Swiss Skydiver continued to pursue, to no avail as the Brad Cox-trainee pulled away to earn an automatic entry to the Breeders’ Cup Classic-G1 on Nov. 6 at Del Mar.

Maxfield dug in for second, with Silver State one and three-quarter lengths back in third, with Swiss Skydiver and By My Standards rounding out the field. Knicks Go finished the one and one-eighth miles in 1:47.70, recording a 111 Beyer.

“He ran huge,” Cox said. “There's always a concern when you ship to Saratoga and this can be a demanding surface. I thought the race at Prairie Meadows really tuned him up well. He was well within himself and that was his big work for this race five weeks ago. He had three maintenance works at Ellis and he came in here a fresh and happy horse, ready to go.”

The 5-year-old son of Paynter kicked off his 2021 season with a two and three-quarter lengths victory in the Pegasus World Cup Invitational-G1 at Gulfstream Park in late January, followed by back-to-back fourth-place finishes in the Saudi Cup-G1 (at King Abdulaziz Racecourse on Feb. 20) and Metropolitan Handicap-G1 (June 5), leading up to a dominant 10 1/4 lengths score in the Prairie Meadows Cornhusker Handicap-G3 July 2, where he earned a 113 Beyer Speed Figure.

Knicks Go once again ranks No. 1 in the latest NTRA Top Thoroughbred Poll, a position he held earlier in the year after the Pegasus win, and he tops the Longines Breeders' Cup Classic Rankings. He improved his overall record to 8-3-1 from 22 career starts, with $5,368,995 in earnings, the second richest Maryland-bred runner in history, behind only Cigar ($9,999,815). It was 25 years ago this year that Cigar was wrapping up his second Eclipse Award as Horse of the Year.

Last year, the speedy gray recorded a perfect 3-for-3 season, starting with a seven and a half-length victory in a one and one-sixteenth miles allowance at Oaklawn Park. Surgery for a bone chip in his knee put him on the sidelines, but Knicks Go returned seven and a half months later to set a track record for the mile and a sixteenth in a Keeneland allowance in October, winning by 10 1/4 lengths as he hit the wire in 1:40.79. The win encouraged his connections to keep him at Keeneland for the Breeders’ Cup, where he delivered another record-breaking performance in the Dirt Mile-G1. Leading gate-to-wire, Knicks Go beat Jesus’ Team by three and a half lengths in 1:33.85.

His impressive season last year earned him the title of 2020 Maryland-bred Horse of the Year and champion older male, along with Top Mid-Atlantic-Bred of 2020, based on a poll conducted by Mid-Atlantic Thoroughbred and The Racing Biz.

Purchased by Korea Racing Authority for $87,000 as a yearling at the 2017 Keeneland September sale, Knicks Go started under trainer Ben Colebrook, who sent him out for a victorious debut as a 2-year-old at Ellis Park. After a fifth in the Sanford Stakes-G3 at Saratoga, followed by a third in the Arlington-Washington Futurity, Knicks Go made headlines with a five and a half-length score in the Claiborne Breeders' Futurity-G1 at Keeneland at 70-1. Earning a berth into the Breeders' Cup Juvenile-G1 that November at Churchill Downs, Knicks Go battled to finish second behind Eclipse Award winner Game Winner. He was named Maryland-bred Horse of the Year and champion 2-year-old male off those efforts.

As a 3-year-old, the son of Paynter made eight starts, seven in stakes, six of those graded. Winless throughout the season, his best performances included second-place finishes in the Ellis Park Derby in August and a seven-furlong allowance at Keeneland in October. He was transferred from Colebrook to Cox in early 2020.

“He's a very sound horse and he's happy,” Cox said. “We wouldn't be here if he wasn't. We'll come up with a plan somehow. We'll just let the dust settle but it will probably be the Classic."

Bred by Sabrina Moore and Angie Moore, who were at Saratoga to witness his Whitney-G1 victory, the Maryland-bred was originally sold as a weanling for $40,000 to Northface Bloodstock at the 2016 Keeneland November sale.

Knicks Go is one of six Maryland-breds produced by Maryland-bred Kosmo’s Buddy, a stakes-winning daughter of Outflanker out of an Allen’s Prospect mare who has four winners from five starters. The most recent is Knicks Go’s 3-year-old half-brother Cosmicality, who broke his maiden at Pimlico on the July 4th card.

After she RNA’d for $195,000 at the 2018 Fasig-Tipton Kentucky fall mixed sale, Kosmo’s Buddy was purchased by Park for a client and later sold to Sallusto and Albina for Newnanner Stud Farm in Versailles, Ky., where she now resides. Her most recent foals are fillies by Justify (2020) and Ghostzapper (2021).

Read more about the Whitney-G1 here