Bell Gable Stable’s Somekindofmagician made magic happen in the $75,000 Find Stakes, for Maryland-bred/Maryland-sired, 3 & up, as he came home the winner by one and three-quarter lengths over Nick Papagiorgio at Pimlico on Saturday, Aug. 21. 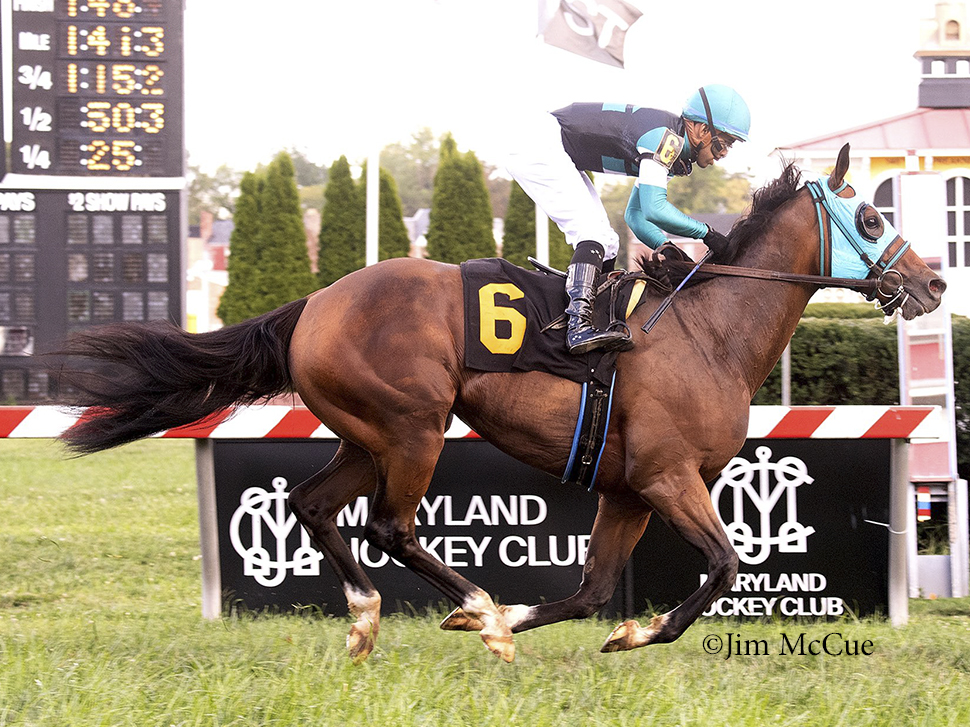 Coming off two back-to-back wins at Delaware Park, Somekindofmagician settled near the back of the pack, just ahead of Benny Havens, as stakes winner Trifor Gold took over the role of early pacesetter to lead the seven-horse field through an opening quarter-mile in :25.02 and half-mile in :50.72 over the yielding turf course. As they turned for home and down the stretch, Somekindofmagician moved out to the center of the track and chased down Nick Papagiorgio to pull ahead for the win in 1:48.13 for the one and one-sixteenth miles. Alwaysmining was a neck back in third, with Trifor Gold fourth.

“He’s showing us signs that he’s doing very well. Honestly, his last two wins for like $20,000 claiming, but he’s gotten so much better. I think he needed that,” trainer Gary Contessa said. “He went a long dry spell without winning a race, and each win I’ve watched him just improve drastically.”

Notching his first stakes victory from six attempts, the 7-year-old gelded son of Street Magician improved his 33-start record to 6-5-4 with $279,866 in earnings.

“We thought, ‘Hey, let’s take a shot at this stake.’ It’s a Maryland-bred, Maryland-sired race, which he fits,” Contessa said. “We just thought he was coming in on top of his game and we’d find out if the top of his game was good enough. Sure enough, he delivered.”

Originally purchased by R. Larry Johnson as a 2-year-old for $14,000 out of the 2016 Fasig-Tipton Midlantic Winter Mixed sale, Somekindofmagician was unplaced in two starts that year before returning as a 3-year-old and breaking his maiden in his fourth attempt in July 2017. The season continued with an allowance victory at Belmont prior to his stakes debut in the Maryland Million Turf, where he finished second to Spartianos, missing by a head in a five-horse photo finish. He shipped to Gulfstream Park for his final start of the year and finished fifth in the Tropical Park Derby.

He was winless in his next 11 starts for Johnson and trainer Mike Trombetta, including another attempt in the Maryland Million Turf that resulted in a sixth-place finish, before he was claimed for $25,000 by Bell Gable Stable and trainer Jamie Ness at Colonial Downs on Aug. 24, 2019. His first three starts for his new connections included a second-place finish, at 32-1 in the Maryland Million Turf behind Mr. d’Angelo.

Coming off of a nearly nine-month layoff, Somekindofmagician returned in July 2020. He made six starts last year, picking up a win, a second and two thirds prior to his fourth attempt in the Maryland Million Turf, winding up sixth of 12. Turned over to Contessa this spring, he struck out twice in two starts at Belmont Park and Delaware before scoring successive claimer wins while in for a $20,000 tag at Delaware Park July 21 and Aug. 7, with the first going a mile and seventy yards on the turf in 1:41.07 and the second going one and one-sixteenth miles on the turf in 1:41.43. His career has been made on the turf as 29 of his 33 lifetime starts, and all six of his wins, haev been on the grass.

Bred by the late Earl Barnhart, Somekindofmagician is out of Love Is Kind, a stakes-placed daughter of Not For Love campaigned by Barnhart for three seasons, through 20 starts and a third-place finish in the 2006 Pistol Packer Handicap at Philadelphia Park before being retired to the broodmare band. Somekindofmagician is his dam’s fifth foal, and only stakes winner.

Somekindofmagician, born in 2014 and foaled at Northview Stallion Station, is one of the last two reported foals bred by Barnhart, who died in 2015. The other is the Not For Love gelding Love You Much (out of Runaway Pearl), second-place finisher in the 2020 Jim McKay Turf Sprint and Laurel Dash and an earner of $280,930.