ZWP Stable and Non Stop Stable’s homebred Malibu Beauty became her dam’s third stakes winner as she led gate-to-wire to win the $75,000 Miss Disco, for Maryland-bred/Maryland-sired 3-year-old fillies, by four and a half lengths on Saturday, Aug. 21 at Pimlico. 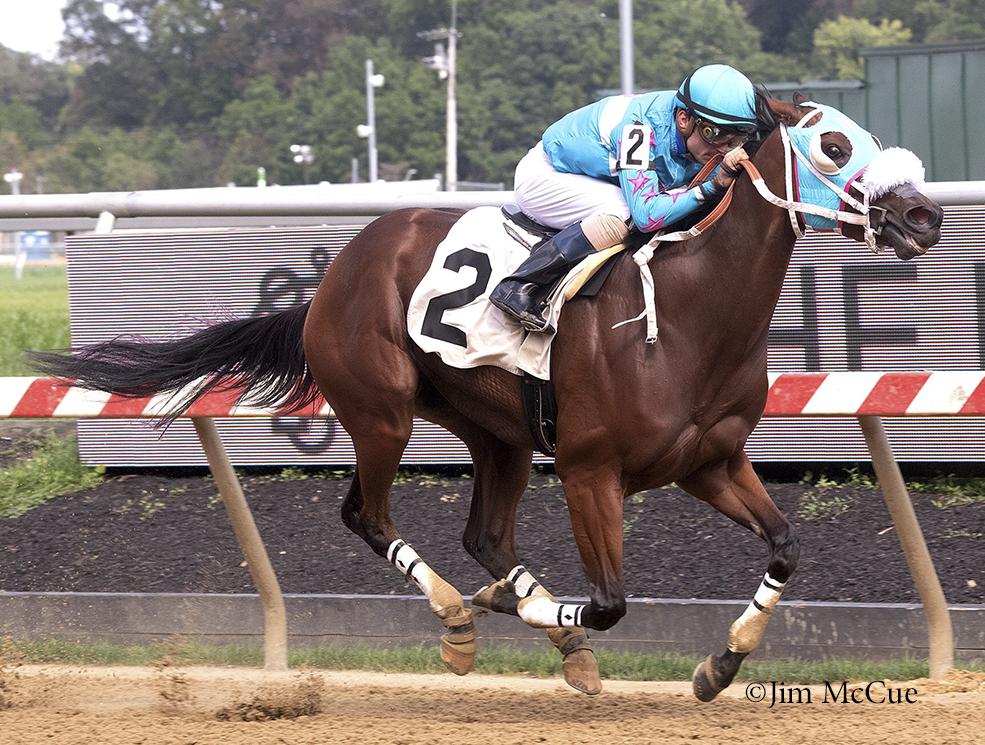 Back in stakes company for the first time since finishing second to Street Lute in the Stormy Blues in June, Malibu Beauty went off the 2-5 favorite in the field of four in the Miss Disco after Street Lute was scratched. She surged quickly to the front and dueled with Response Time through an opening quarter-mile in :23.26 and a half in :46.56. The Gary Capuano trainee started to open up in the stretch and was never threatened as she came home in 1:11.48 for six furlongs. Stablemate Hitch a Ride finished second, a nose in front of My My Girl. It was the first of two stakes wins on the card for Sheldon Russell, who guided Jaxon Traveler to victory two races later in the Star de Naskra.

“It was just depending on who broke good. Malibu broke sharp and the other horse was outside. I just said I don’t want you going head-and-head setting it up for somebody coming off the pace,” Capuano said. “Then [Response Time] ended up going with Malibu and Hitch a Ride just tracked nice. They both ran great races today.”

Malibu Beauty got her fourth win from nine starts this season. She started off with three losses from January through March before picking up back-to-back allowance wins at Laurel Park in April and Pimlico in May. She couldn’t hold off Street Lute in the Stormy Blues after forcing the pace, and was beaten a half length. Shipped to Delaware Park, Malibu Beauty faced older runners twice in July. After finishing second in a starter allowance, she was in total control in a gate-to-wire win in allowance company.

“She’s a real nice filly, been getting better each time. She’s just cool,” Capuano said. “She got beat in a couple of tough races, but other than that she’s been really good.”

In 14 career starts, the daughter of the late Northview Stallion Station sire Buffum has finished in the top four 13 times. She was a winner at 2 when taking a waiver maiden at Laurel in December, her fourth career start. Two weeks later she ended the year with a fourth in the Anne Arundel County against open company after leading early.

Out of the Malibu Moon mare Slow and Steady, dam of Maryland-bred juvenile champion Steady Warrior (Cherokee’s Boy), stakes winner Steady N Love (Not For Love), and stakes-placed Lucky in Malibu (Lookin At Lucky), Hanky Doodle (Cherokee’s Boy) and Who Dat Boy (Cherokee’s Boy), Malibu Beauty was offered at the 2019 Fasig-Tipton Midlantic Eastern Fall yearling and exited a $45,000 RNA. She is the sixth runner for her dam to earn six-figures, as her stakes win pushed her total to $207,134. Slow and Steady’s nine starters combined have earned $1,454,439.

Slow and Steady is also the dam of yearling filly by Cross Traffic and delivered a Great Notion filly this year on May 30. The family tree of stakes winners grew earlier this year when Steady N Love’s son Shackled Love won the Private Terms Stakes in March for his breeders. His most recent win came in the fourth race on the Maryland Pride Day card in allowance company.