Three Diamonds Farm’s Kiss the Girl was relentless as she reeled in apparent winner Awesome Jazz in deep stretch to score by a neck in the $75,000 All Brandy Stakes, for Maryland-bred/Maryland-sired fillies and mares at Pimlico on Saturday, Aug. 21. 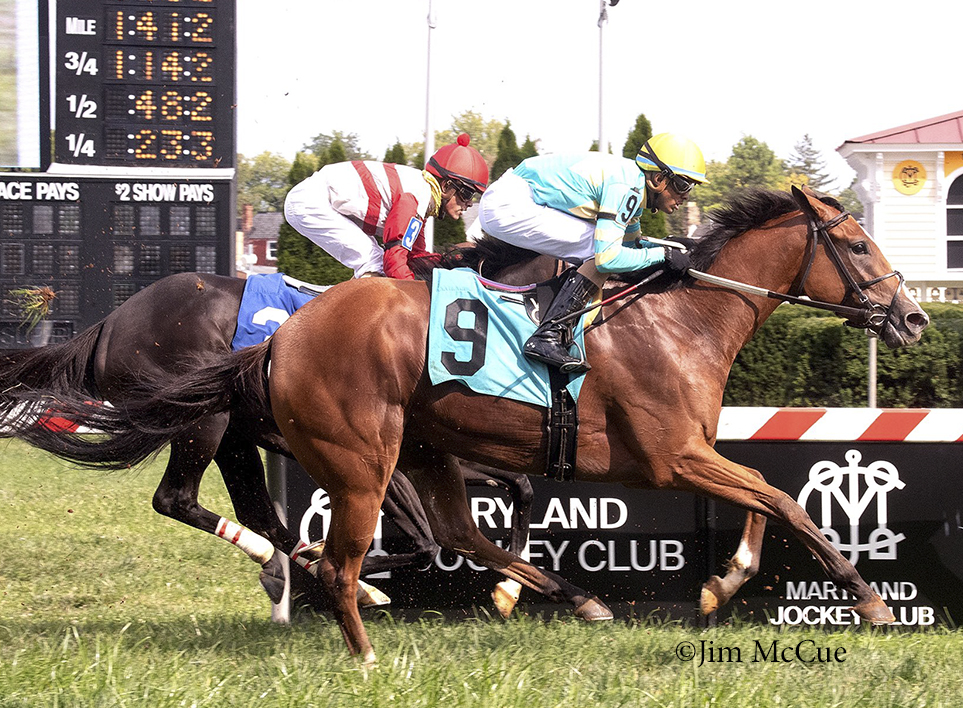 As the field rounded the far turn, Kiss the Girl had to steady, while at the same time Awesome Jazz surged around the outside and opened up by four lengths, with favorite Quiet Company in hot pursuit. Kiss the Girl found an opening as the early leaders drifted out and took aim at the leader. Victor R. Carrasco eased her out in mid stretch and the bay filly responded, catching Awesome Jazz at the wire to stop the clock at 1:48.53 for the mile and a sixteenth over a yielding turf course.

“The owner tried her on the grass before we received her to train and he just wasn’t satisfied that she really had her best opportunity, so he wanted us to revisit it,” trainer Mike Trombetta said. “It took a couple of starts for her to fall into place, but he was certainly convinced that she could do it and it appears he was right.”

Starting as a 2-year-old under trainer Todd Pletcher, the daughter of Into Mischief broke her maiden first out at Belmont Park in June 2019, winning by four and half lengths, before moving onto Saratoga to make her stakes debut in the Schuylerville Stakes-G3. Kiss the Girl threatened Comical down the stretch before begrudgingly finishing second, by a neck.

Switched to trainer Steve Asmussen’s barn for her 3-year-old season, which consisted of eight starts last year, Kiss the Girl managed to pick up two allowance wins going six furlongs at Oaklawn Park (February) and later seven furlongs at Laurel Park (November). In her two stakes starts, she finished seventh in the Purple Martin and eighth in the Christiana, her first start on the turf and second stretching out to one and one-sixteenth miles.

She returned this year under the guidance of Trombetta and was sent out in back-to-back stakes starts in the Geisha, where she finished second, and the Conniver, which she won by three-quarters of a length in 1:23.21 going seven furlongs at Laurel in March. After a sixth-place finish in an allowance at Pimlico in May, Kiss the Girl returned to the turf in the Peach Blossom Stakes at Delaware July 7, where she finished fourth, and later picked up a second just a few weeks later in a one-mile turf allowance at Pimlico July 23.

“She missed a little bit of time and we got her going again,” Trombetta said. “She would run OK, but she’s finally race fit and today was the day that she kind of broke through and maintained her best form again.”

Bred by Classic Thoroughbred XII, she was consigned to the 2018 Fasig-Tipton Midlantic Eastern Fall yearling sale and purchased for $210,000 by Three Diamonds. Kiss the Girl is the first foal produced by her dam Spin the Bottle, a daughter of Hard Spun who also has a Maryland-bred yearling filly by Malibu Moon and foaled a filly by Classic Empire in Kentucky in February. She was bred back to Improbable for 2022.

Read more about the All Brandy Stakes here