West Point Thoroughbreds and Marvin Delfiner’s star Maryland-bred Jaxon Traveler returned to his home state in peak condition after a trip to Saratoga, outrunning his foes down the stretch in the $75,000 Star de Naskra Stakes, for Maryland-bred/Maryland-sired 3-year-olds, to win by three lengths during Pimlico’s Maryland Pride Day program on Saturday, Aug. 21. 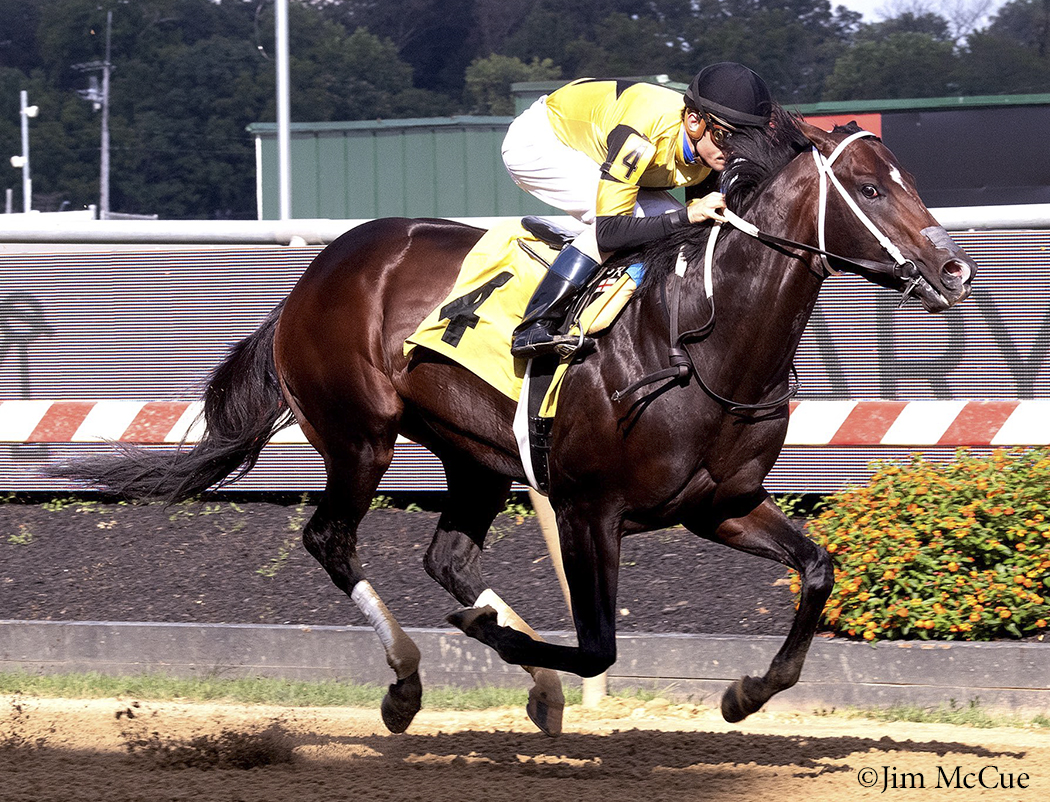 Returning to the dirt after two previous starts on the turf and all-weather surface and facing only two rivals, Jaxon Traveler went quickly to the front before settling to the outside of Cry No More, who cruised through an opening quarter-mile in :22.56 as Alwaysinahurry hung back in third. Jaxon Traveler made his move around the final turn, getting a half in :44.94 and battling Cry No More every step of the way before sprinting clear to hit the wire ahead of late-running Alwaysinahurry, who finished a head in front of Cry No More to round out the trio. Final time for the six furlongs was 1:10.21.

“I figured the horse on the inside was probably going to go to the lead and try and take it to us, so I’m glad he was able to relax. That’s all part of trying to educate them,” West Point founder and CEO Terry Finley said. “They can only go so far if they’re going this fast and as far as they can. They have to learn how to relax, so it worked out well. He’s getting bigger and stronger, so we’re in good shape with him.”

Notching his third career stakes win, and second in Maryland, Jaxon Traveler has never been worse than third in nine career starts, winning five, and has earned $390,210.

“He’s a forward-going horse. The plan was to bang him out there and see where we’re at,” said jockey Sheldon Russell, who rode him for the first time. “Looking at the program, you could see [Cry No More] has a little bit of speed. Being on the outside he was always comfortable, he was always traveling. Great job to Steve and his team for having him ready today. I was just very fortunate that I was able to get to ride him.”

Sold for $80,000 as a yearling and later purchased for $140,000 by West Point out of last year’s OBS Spring sale, the Steve Asmussen trainee broke his maiden on debut at Pimlico in late September, winning by an impressive 10 lengths as he finished the six-furlong test in 1:10.41. The following month, he scored by four in a six-furlong allowance at Laurel Park which led him right into a successful stakes debut in December, where Jaxon Traveler beat Singlino by three-quarters of a length in the Maryland Juvenile Futurity. His stellar three-win season earned him the title of 2020 Maryland-bred champion 2-year-old male.

The 3-year-old colt has raced exclusively in stakes this year, starting off with a runner-up finish (by a head) in the Gazebo at Oaklawn Park in March, followed by a return to the winner’s circle after a two and three-quarter-length victory in the Bachelor as the favorite, stopping the clock for six furlongs in 1:10.07.

He made his graded stakes debut in the Grade 3 Chick Lang at Pimlico on Preakness Day, May 15, and finished second, just a length and a quarter behind stablemate Mighty Mischief. Jaxon Traveler took his talents north in June and July. First to Woodbine, where in his first start on the all-weather track he finished second in the Woodstock. Next out, in Saratoga’s Grade 3 Quick Call at five and a half furlongs on the turf, he wound up third, the worst finish of his career.

Bred by Dr. and Mrs. A. Leonard Pineau, Jaxon Traveler is the fourth of five foals of racing age for stakes-placed Listen Boy. The daughter of After Market has four winners from starters, including $333,310-earner Nuclear Option. Listen Boy delievered a colt by Cross Traffic on Feb. 16 and was bred back to Liam’s Map.