Hillwood Stables’ veteran stakes winner Cordmaker is having one of his best seasons yet as the 6-year-old recorded his second stakes win of the year in the $100,000 Victory Gallop Stakes at Colonial Downs on Monday, Aug. 23. 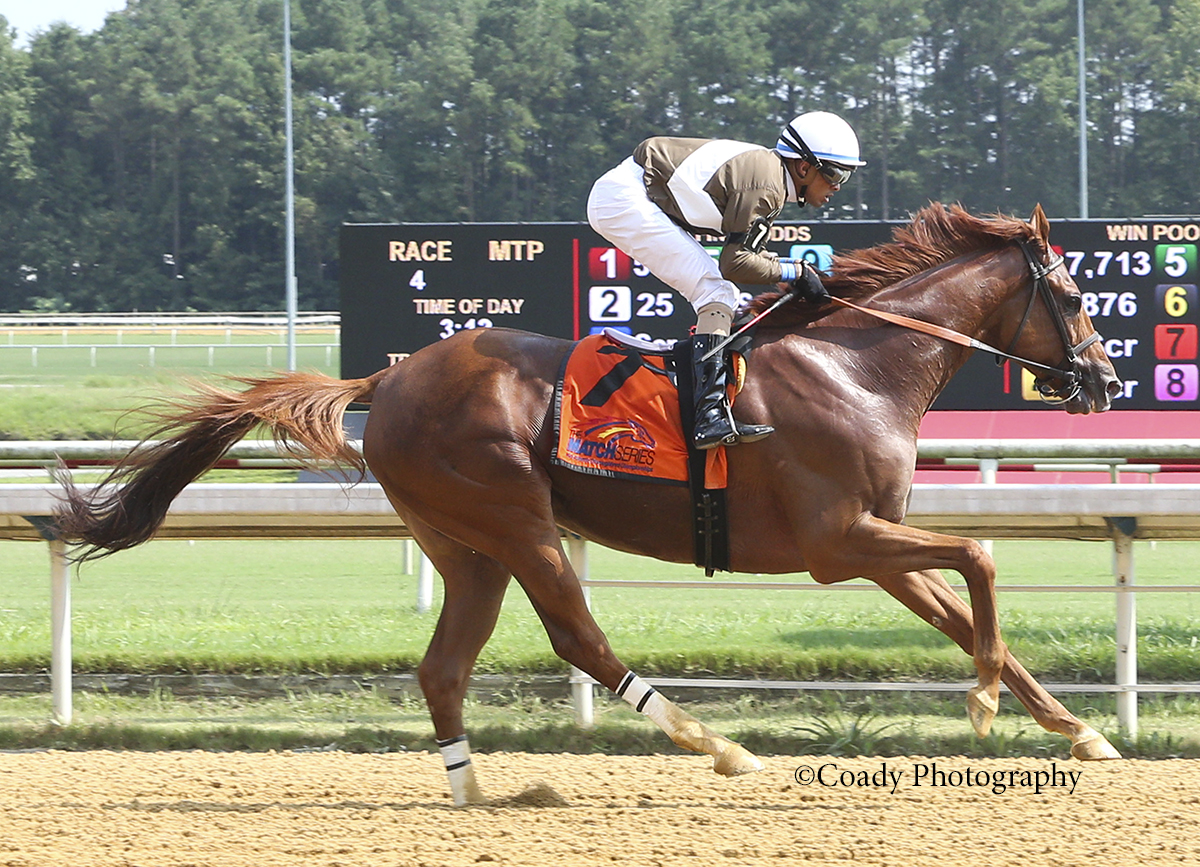 In his 31st lifetime start, and first at the New Kent, Va., track, Cordmaker tracked early pacesetter Rock On Luke through opening quarters of :23.49 and :46.14 in the mile and a sixteenth test on the main track. Hitting three-quarters of a mile in 1:09.55, Rock On Luke still led as the four-horse field turned for home, but not for long. Cordmaker stormed down the center of the track to take over the lead and drove to the wire two and a quarter lengths ahead of fellow Maryland-bred McElmore Avenue, who made a late move down the stretch to finish second.

Cordmaker’s final time of 1:40.45 was a track record, which lasted two races until Saracosa lowered it to 1:39.72 in the Love Sign Stakes. It was the Curlin gelding’s 10th career victory, sixth in a stakes, as he boosted his overall earnings to $673,640.

The Rodney Jenkins trainee has raced exclusively in stakes since September 2020, a total of 11 starts, six of them this season, and has finished in the top three nine times. He began 2021 with back-to-back third-place finishes in the Jennings and John B. Campbell in January and February at Laurel Park, followed by a 1-length score as the favorite in the Harrison E. Johnson Memorial in March. He finished fourth in his third consecutive attempt in the Pimlico Special-G3 at Pimlico in mid-May and didn’t reappear for more than two months when running third in the Deputed Testamony at Pimlico on July 31.

He returned in 2020 after a nine-month break and had a busy season, making eight starts in six months. He didn’t record any wins at 5, but was second in Deputed Testamony and Richard W. Small Stakes and third in the Pimlico Special-G3 and Native Dancer, the latter his final start of the year.

Bred by Robert T. Manfuso and Katharine M. Voss, Cordmaker was purchased by Ellen Charles’ Hillwood Stable as a yearling for $150,000 out of the 2016 Fasig-Tipton Midlantic Eastern fall sale. The seventh foal out of the Polish Numbers mare Tanca, he is her third stakes winner, along with Corvus (Dance With Ravens) and Las Setas (Seville-Ger). Tanca is the dam of seven winning starters from nine named foals of racing age. Her 2019 colt by Street Sense, a $240,000 Fasig-Tipton Midlantic falll sales yearling isn’t named; she has a yearling colt by Madefromlucky, delivered a filly by Honor Code this March, and was bred back to Vino Rosso for 2022.