Bonuccelli Racing’s Cynergy’s Star left his mark on Timonium as he took over midway down the backside and held the lead to win the inaugural $125,000 Timonium Juvenile Stakes by two lengths during the Maryland State Fair’s Timonium race meet on Sunday, Aug. 29. 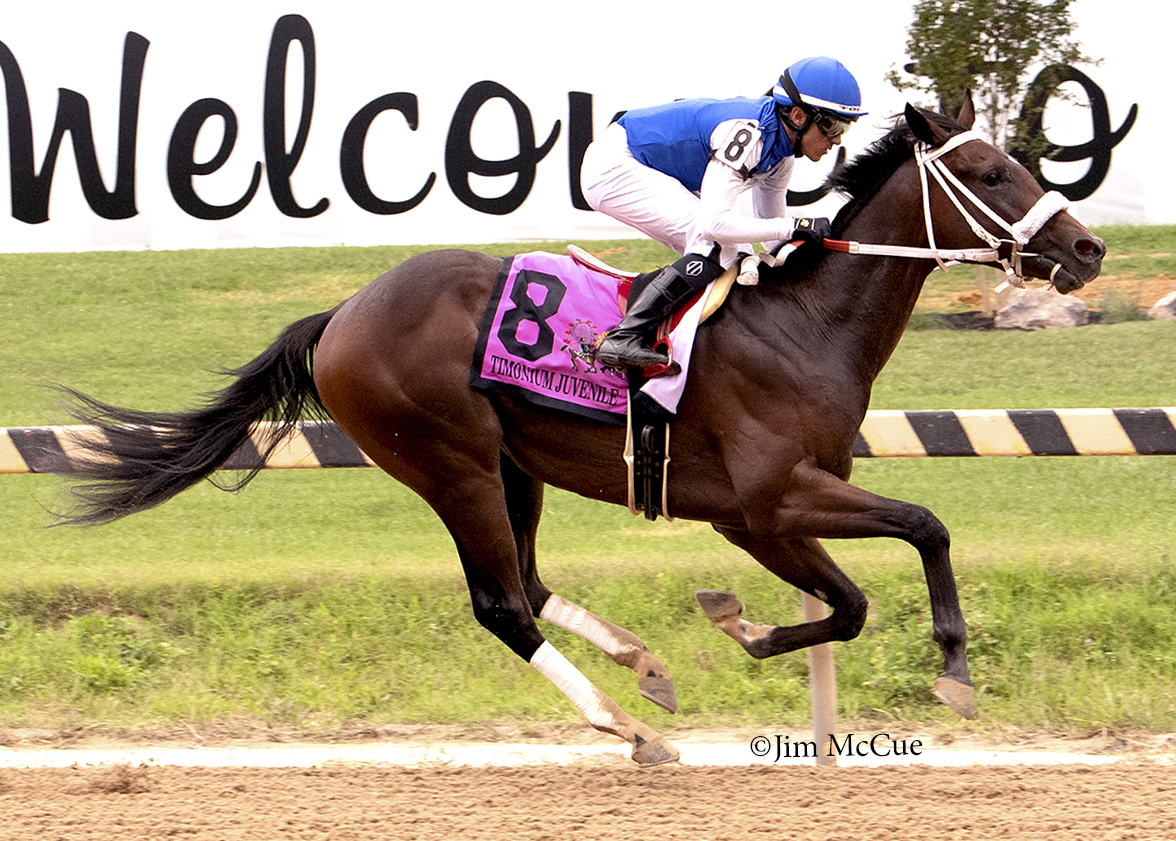 Making his third career start, Cynergy’s Star found his place to the outside of Addy’s Laddy T N T and Slaats, as Up for the Chance and Bandfromthebar battled through the opening quarter in :24.07. The Kenneth Cox trainee made his move midway down the backside as he took over the lead through a half in :48.98, rounded the far turn on top and held off Slaats in the stretch, stopping the clock for the nearly six and a half-furlong distance in 1:21.57. Addy’s Laddy T N T, a Maryland-bred gelding by Golden Lad, finished a half-length back in third. The first juvenile stakes held at Timonium in decades, the race offered a guaranteed purse of $75,000, with $25,000 added if Maryland-bred or Maryland-sired, or $50,000 added for both. Cynergy’s Star and Addy’s Laddy T N T, plus two others in the six-horse field, ran for the $125,000 purse.

“I’m so happy, I don’t know that to say,” said owner Charlie Bonuccelli. “This was my first stakes winner. Kenny has liked him right from the start. We came here to run for the bonus, but I was really just hoping for second or third. I’m so happy that he won today, but I would really love for him to win the Maryland Million.”

A son of Great Notion, Cynergy’s Star was purchased by Bonuccelli for $25,000 at last year’s Fasig-Tipton Midlantic Eastern Fall yearling sale out of the Becky Davis consignment. His connections aimed high for his first start, the $100,000 Hickory Tree Stakes at Colonial Downs on Aug. 2, where he finished seventh of nine going five furlongs on the turf. Returning just two weeks later, he broke his maiden on a muddy Pimlico track by three-quarters of a length over Addy’s Laddy T N T in a five and a half-furlong waiver maiden.

Bred by Dr. and Mrs. Thomas Bowman and Skeedattle Associates, he is the fourth winner from as many starters for his dam Smooth Talking, and her second stakes winner. Her daughter Look Who’s Talking, by Capo Blanco (Ire), won the 2015 Maryland Juvenile Filly Championship.

Smooth Talking is the dam of six named foals, as well as an unnamed yearling filly by Madefromlucky.