After three years of setbacks and hardship, Anchor and Hope Farm’s homebred Exculpatory paid back his connections tenfold, adding to an already impressive debut season as he won the $150,000 Robert Hilton Memorial Stakes at Charles Town in gate-to-wire fashion Friday, Aug. 27. 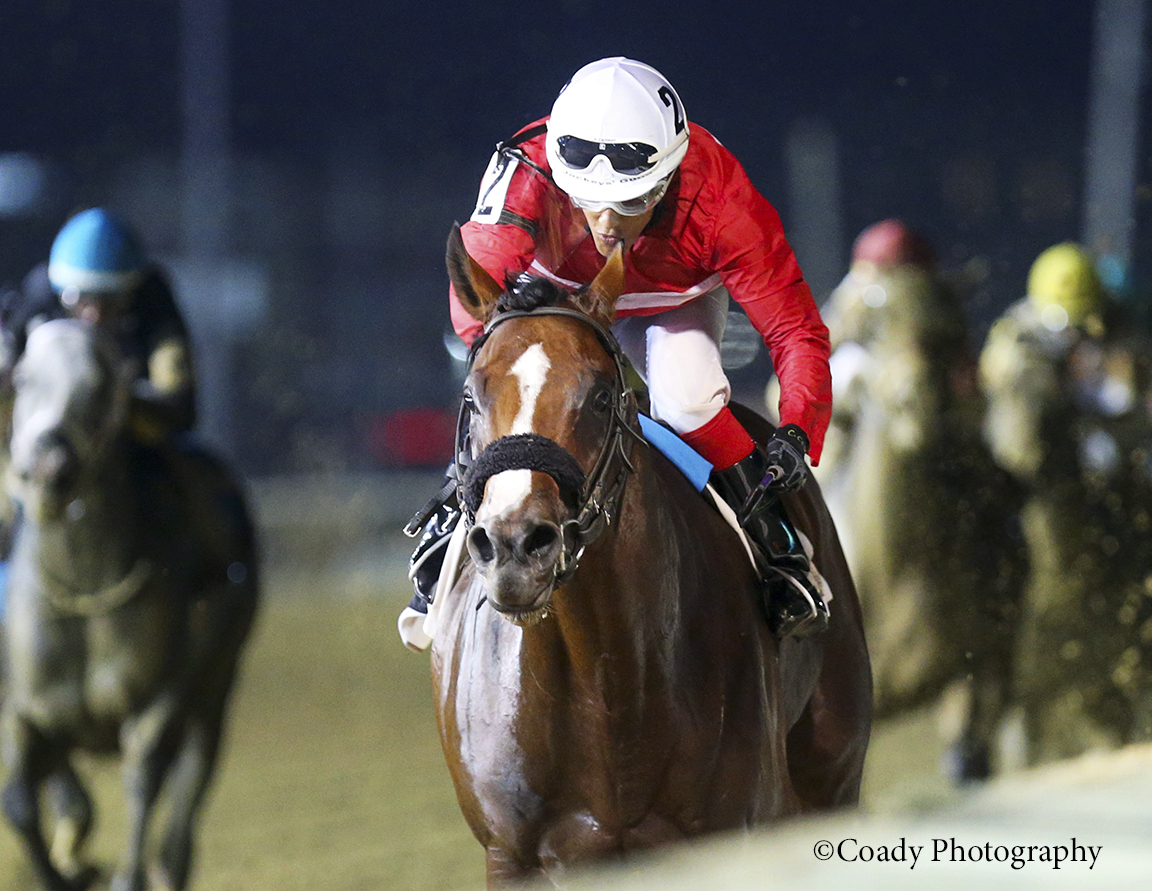 Sent off at 6-1 in the field of nine 3-year-olds, Exculpatory broke from the two post and found his place along the rail as he moved up to take the lead, with graded stakes-placed Maryland-bred Hemp pressing from the outside as they hit the opening quarter-mile in :22.85 and a half in :46.41. The rest of the field began to bunch up and attempted to catch Exculpatory as they entered the final turn, but it proved futile as Exculpatory burst away down the stretch to win by six and a quarter lengths over Awesome Gerry, with graded stakes winner and Kentucky Derby contender Helium a neck back in third. Under the guidance of jockey Carol Cedeno, Exculpatory completed the seven furlongs in 1:23.49, less than a second off the track record.

The Mark Reid trainee’s Charles Town stakes victory follows a two and a quarter length-score in a seven-furlong $75,000 handicap at Colonial Downs last month in a final time of 1:22.17.

The first foal born at Anchor & Hope in 2018, on Jan. 23, Exculpatory was sent through the sales ring as a weanling at the Keeneland November Breeding Stock sale, where he was bid up to $37,000 but failed to meet his reserve. The following year, Exculpatory was nominated to Fasig-Tipton’s Saratoga selected yearling sale, but was pulled by owner/breeders Grace and Louis Merryman after injuring himself on the Port Deposit farm.

Though the next plan was to enter him in the Fasig-Tipton Midlantic Fall yearlings sale, all hopes were dashed when Anchor & Hope endured a fire that destroyed the farm’s main barn. No human or equine was fatally injured, but the impact was devastating, and later resulted in the Merrymans offering their yearlings privately. Though Exculpatory was part of the group, it was later decided they would keep the bay Mineshaft colt.

After early training with Louis Merryman’s father, stakes-winning trainer Edwin Merryman, Exculpatory was sent to Pimlico to train with Reid as he prepared for his career debut. Though he encountered a few more road bumps along the way, the colt made up for them as he broke his maiden in his debut this past March in a five and a half-furlong maiden special weight at Laurel Park. Despite breaking last and trailing by nearly a dozen lengths, everything clicked for the colt as he powered home for the win.

Exculpatory finished fifth in his second start, an allowance at Parx in early May, before returning to Maryland and notching a four and a quarter-length victory in a six-furlong allowance at Pimlico May 28. Next out he was second, beaten a neck, in another six-furlong Pimlico allowance June 19.

The third foal out of Elusory, an unraced daughter of Broken Vow, Exculpatory is a half-brother to 5-year-old multiple stakes-placed $324,239-earner Tappin Cat (by Tritap). The mare has produced two winners from three starters. Failing to produce a foal since Exculpatory, the mare was bred this year to Anchor & Hope Farm stallion Holy Boss.