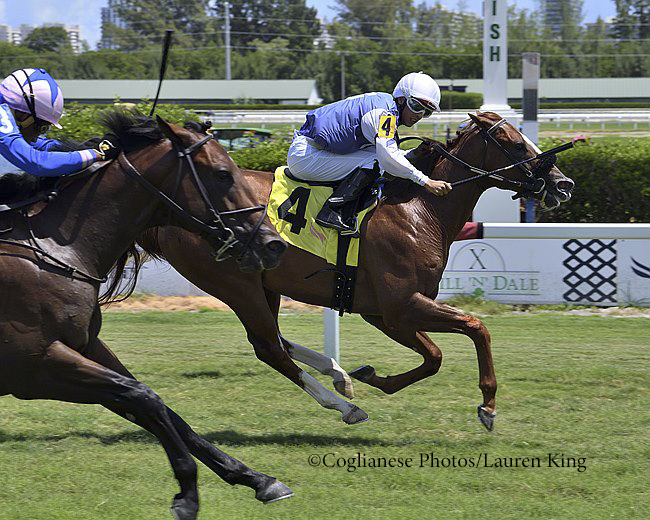 A $130,000 juvenile purchase by owners Karl and Cathi Glassman at the OBS April sale, Nerve is trained by Ed Plesa and defeated 10 others in his debut on the grass in his second career start. Bred in Florida by Ocala Stud, he is the last foal out of multiple stakes producer Ennuhway (Notebook), and the first winner from the first crop of Rainbow Heir, who stands at Shamrock Farm in Woodbine, Md.

One of the best sprinters in the region over the last decade while racing from 3 to 8 on on turf and dirt, and the New Jersey-bred Horse of the Year of 2014, Rainbow Heir was retired to Ocala Stud in 2018, covered 30 mares, and went back into training with an eye on the Breeders’ Cup. The nine-time stakes winner added a graded stakes-placing that fall when third in the $300,000 Turf Monster-G3 at Parx. In his stakes debut more than five years earlier, he captured Monmouth’s Grade 3 Jersey Shore Stakes on the main track by five lengths. In between those efforts came four stakes wins at six furlongs, three in 1:09 and change, and a 1:08.60 in the $125,000 Aqueduct Turf Sprint Championship. He zipped five furlongs on the turf in :55.47 when taking the $175,000 Gulfstream Park Turf Sprint in January 2018. When he retired for the second time, he had earnings of $837,395 from 33 career starts, with 14 wins, four seconds and four thirds.

Rainbow Heir moved from Florida to Shamrock Farm to stand his fourth breeding season in 2021 for a fee of $2,000 live foal.