Brittany Russell trainee Hello Beautiful ran her heart out, like she always does, as she delivered a tremendous gate-to-wire victory in the $100,000 Weathervane Stakes, for fillies and mares, 3 & up, to secure her seventh career stakes win by 10 1/4 lengths at Laurel Park on Saturday, Sept. 18. 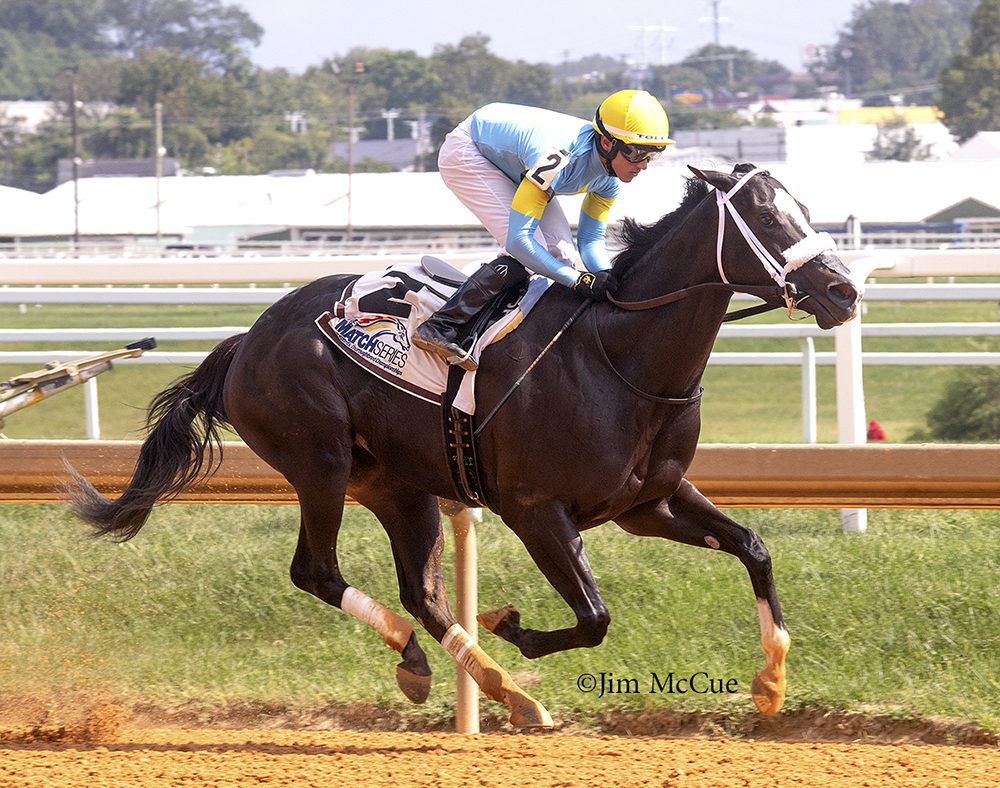 Making her seventh stakes start at her home track, Hello Beautiful headed right to the front through an opening quarter-mile in :22.37. Fifteen Royals and Coconut Cake battled nearly four lengths behind the leader as they headed around the far turn. Jevian Toledo, deputizing for regular rider Sheldon Russell, guided Hello Beautiful through a half in :45.32 before the 1-5 favorite opened up with ease down the stretch and crossed the wire in a final time of 1:09.56 for the six furlongs. It was a Maryland-bred sweep as Coconut Cake held second, with Never Enough Time two lengths back in third.

“She’s a really special filly. When you have a nice horse like her, anyone can win on her like that,” Toledo said. “I have to give her all the credit. I just put her in the front and she grabbed the bit the whole way. In the stretch I just showed her the stick and she took off, and when I looked back it was easy enough so I just took hold of her and she came back real easy to me.”

It was an emotional victory for the 4-year-old filly’s trainer and her husband Sheldon, who suffered a foot injury in Laurel’s Sept. 9 program finale which has sidelined him indefinitely.

“It’s really bittersweet. I had a tear in my eye, watching it with Sheldon,” Russell said. “She’s just so special.”

Purchased by Russell for $6,500 as a yearling out of the 2018 Fasig-Tipton Midlantic December mixed sale, Hello Beautiful finished third in her debut at Pimlico the following spring, finished second in the next and made quite the impression as she broke her maiden by five and a half lengths in her third career start, that July at Laurel. She finished second in an allowance before making her stakes debut on Maryland Million Day, where she won the Lassie by three and three-quarter lengths, and later closed out her 2-year-old season with an 11 3/4-length score in the Maryland Juvenile Filly Championship, going seven furlongs in 1:22.43.

Returning last June, Hello Beautiful picked up an allowance win at Laurel before heading out-of-state to Ellis Park, where she finished 11th in the Audubon Oaks in August, and later to Saratoga for a start in the Prioress Stakes-G2 in September, with the filly finishing sixth. Once she returned to Laurel, she scored back-to-back stakes victories in the Maryland Million Distaff Handicap, won by 11 1/4 lengths, and the Safely Kept, won by three lengths.

This January, she kicked off her 4-year-old season with a length score in the What a Summer Stakes, going six furlongs in 1:10.67, before trying her hand in the Barbara Fritchie Stakes-G3, where she finished fifth. After a gut-wrenching second in the Shine Again Stakes at Pimlico in June, with Hello Beautiful just a neck behind Chub Wagon after a battle down the stretch, she came back a month later to win the Alma North Stakes by three and three-quarter lengths.

The daughter of Golden Lad has improved her overall record to nine wins, three seconds and one third from 17 career starts, with $524,610 in earnings.

Hello Beautiful is one of three starters for her dam Hello Now, a daughter of Tiznow whose other winner is 3-year-old Hello Hot Rod (Mosler). A stakes winner this year when he captured the Jimmy Winkfield Stakes at Aqueduct in January when owned and trained by Russell, Hello Hot Rod was sold after that race for $335,000 at the Fasig-Tipton Kentucky February Mixed Sale.

Hello Now, now owned by Holly House Farm, was bred to Hoppertunity for 2022.