Non Stop Stable’s Tappin Cat showed impressive form as he won his third race in a row, and his first stakes, in the $75,000 DTHA Governors Day Handicap on Saturday, Sept. 25 at Delaware Park on Owners’ Day. 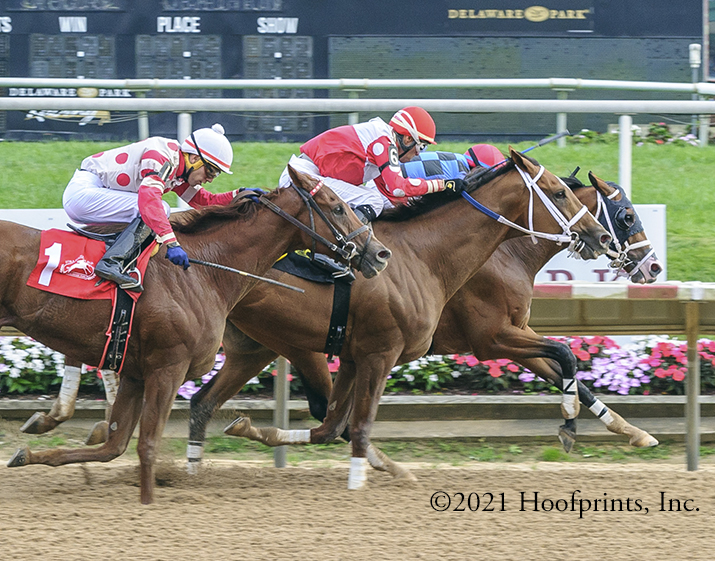 Making his first stakes attempt since the New Castle last year, where he finished fourth, Tappin Cat was quick to find his place early, lapped outside of leader Shane’s Jewel, who led through an opening quarter-mile in :23.79. After a half in :47.10, Tappin Cat took over and drove for home, fighting off a challenge from Senior Investment to the outside and Mischief Afoot up the rail. He hit the wire a head in front of Senior Investment, while late running Bal Harbour was another neck back in third as things got tight late. Final time for the one mile and 70 yards was a solid 1:39.92. The rider of Bal Harbour claimed an objection against Tappin Cat and Senior Investment for interference through the stretch run but the stewards let the result stand.

The stakes was retricted runners who had started at Delaware Park in 2021 – the 5-year-old Gary Capuano trainee fulfilled the requirement by making two starts at the Stanton oval, finishing second in allowance company in June, and winning in August.

Tappin Cat made his first three starts for his breeder Paul L. Fowler Jr., as a 2-year-old in 2018, breaking his maiden in his second start and running sixth in the Maryland Million Nursery in his stakes debut. He returned in 2019 under the ownership of Capuano’s Non Stop Stable and proved incredibly consistent – in 10 starts that season he finished in the top three nine times, and was fourth once. Twice he hit the board in stakes company when second in the Star de Naskra and third in the Maryland Million Classic, while also picking up three allowance wins.

Last year was a bit subpar to his standards, with one win and three placings in seven starts. When he returned this year after nearly seven months off, it took him a couple of races to get back in the groove, but he has since finished first or second in his last five trips to the post. Tappin Cat improved his overall record to 8-9-3 from 27 career starts, for earnings of $399,239.

A son of the late Maryland sire Tritap out of the Broken Vow mare Elusory, Tappin Cat is a half-brother to Exculpatory (Mineshaft), winner of the Robert Hilton Memorial Stakes in late August. Elusory has one other foal of racing age – her first, the 2015 filly Atalantia, placed once in three starts. Elusory has failed to produce a foal since Exculpatory in 2018, and was bred this year to Holy Boss.