Lucky 7 Stables’ Street Lute was back in the winner’s circle on Delaware Park’s Owners’ Day as she caught the leaders down the stretch and passed them with ease to win the $100,000 Tax Free Shopping Distaff Stakes for Delaware-bred or certified fillies and mares (3 and up) by three-quarters of a length on Saturday, Sept. 25. 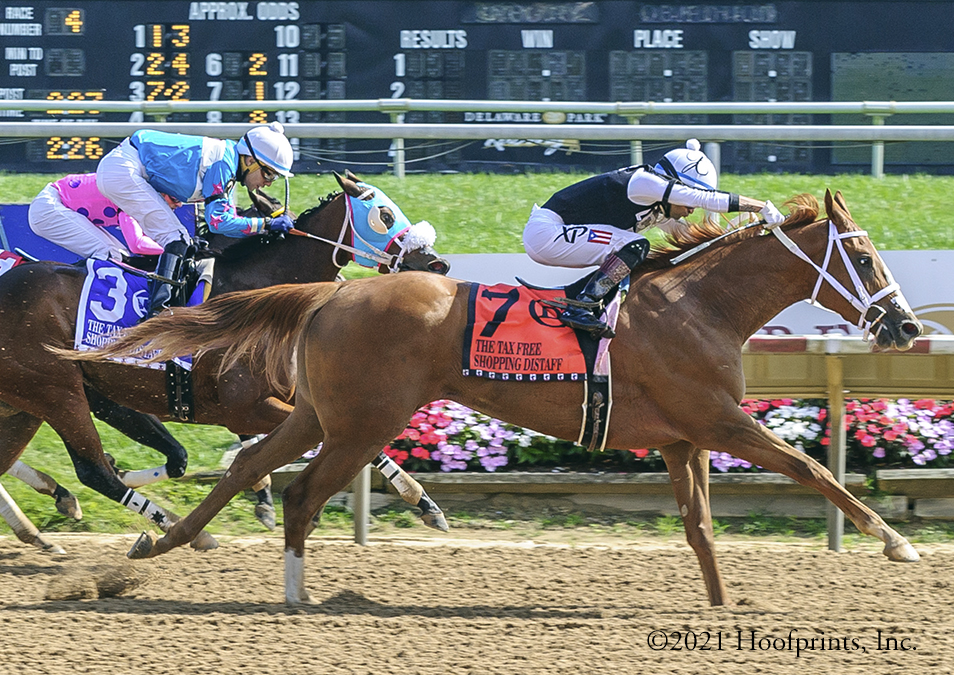 Sent off as the favorite in a field of six, Street Lute settled mid-pack as Plane Drunk led the way, followed closely by recent stakes winner Malibu Beauty, through an opening quarter-mile in :22.47. The Jerry Robb trainee closed the gap between herself and the leading pair as they approached the final turn through a half in :45.12, then made her move on the outside. Stretching out down the center of the track, she finished ahead of fellow Maryland-bred Malibu Beauty, as Plane Drunk held on to finish a neck back in third. Final time for the six furlongs was 1:09.45.

It was Street Lute’s second consecutive Owners’ Day success, following her five-length score in last year’s Small Wonder in her stakes debut in her second start. The Street Magician filly went on to record a near-perfect 2-year-old season, winning five of six starts, including the Smart Halo, Maryland Juvenile Filly Championship and Gin Talking Stakes. Her only loss was a second, by a neck, to Miss Nondescript in the Maryland Million Lassie Stakes. She was named 2020 Maryland-bred champion 2-year-old filly.

Street Lute picked up right where she left off at 3, as she returned in January to score by five lengths in the six-furlong Xtra Heat Stakes, before notching a length victory in the Wide Country Stakes at seven furlongs.

She made her first attempt at a mile in the Beyond the Wire Stakes and finished third. Next out was a graded stakes debut in the Miss Preakness-G3 on Black-Eyed Susan Day at Pimlico. After being bumped from both sides at the break, she attempted to chase down the stretch but faded to finish sixth.

One month later she won the five-furlong off-the-turf Stormy Blues Stakes at Pimlico in a quick :58, but was off-the-board in two out-of-town trips (Colonial Downs’ M. Tyson Gilpin Stakes and the Charles Town Oaks-G3 in West Virginia).

The Tax Free Shopping Distaff is her eighth stakes victory in 14 career starts, and boosted her earnings to $545,720.

Bred by Dr. and Mrs. Thomas Bowman, she was purchased by Robb as a yearling for $10,500 out of the 2019 Fasig-Tipton Midlantic Eastern fall sale. Street Lute is the only starter for her dam Alottalute, a daughter of Midnight Lute, who has produced four foals, the youngest a yearling full sister to Street Lute named Mama’s Eyes. Alottalute was bred to Game Winner for 2022.