Korea Racing Authority’s Knicks Go proved himself once again as he took on a talented field in the $400,000 Lukas Classic Stakes-G3, for 3-year-olds and up, and led gate-to-wire to win by four lengths at Churchill Downs on Saturday, Oct. 2. 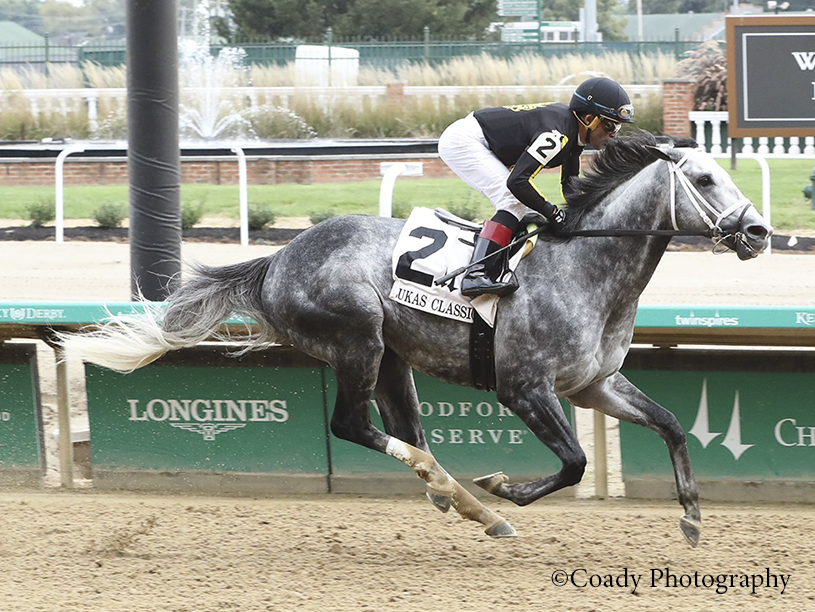 Making his final prep before the Breeders’ Cup Classic-G1 at Del Mar, set for Nov. 6, Knicks Go (1-9) shot straight to the lead as Sprawl, followed closely by Independence Hall, dueled behind him through an opening quarter-mile in :23.53. As they hit the half-mile mark in :47.27, with Independence Hall moving into second and Tacitus beginning to move up Sprawl’s outside, Knicks Go increased his lead once again. Though they tried, no one could catch the front-running Knicks Go as he moved down the stretch with ease to cross the wire ahead of Independence Hall, with Shared Sense one and a half lengths back in third, just a head in front of fourth-place finisher Tacitus.

“We’re excited to get this race under our belt,” Cox said. “He’s a fast horse and he’s dangerous when he gets to show that speed around two turns. Joel gave him an easy trip on the front end. He seemed like he was able to take a breather and open back up around the turn. On to the Breeders’ Cup.”

Knicks Go has now won four graded stakes, all going one and one-eighth miles, from six starts this season, including the Pegasus World Cup Invitational-G1, won by two and three-quarter lengths in January at Gulfstream Park; the Prairie Meadows Cornhusker Handicap-G3, won by 10 1/4 lengths in July; the Whitney-G1, won by four and a half lengths over Maxfield in August at Saratoga.

Purchased by his current owner for $87,000 as a yearling at the 2017 Keeneland September sale, Knicks Go started under trainer Ben Colebrook and went on to win his debut as a 2-year-old at Ellis Park in 2018 before making his stakes debut in the Sanford Stakes-G3, where he finished fifth. That September, he finished third in the Arlington-Washington Futurity before making a name for himself in the Breeders’ Futurity-G1, where he beat Signalman by five and a half lengths at 70-1.

Earning a berth into the Breeders’ Cup Juvenile-G1 that November at Churchill Downs, Knicks Go battled to finish second behind Eclipse Award winner Game Winner. He was named Maryland-bred Horse of the Year and champion 2-year-old male off those efforts.

As a 3-year-old, the son of Paynter made eight starts, seven in stakes, six of those graded. Winless throughout the season, his best performances included second-place finishes in the Ellis Park Derby in August and a seven-furlong allowance at Keeneland in October. He was transferred from Colebrook to Cox in early 2020.

Last year he recorded a perfect 3-for-3 season, kicked off with a seven and a half-length victory in a one and one-sixteenth miles allowance at Oaklawn Park. After recovering from surgery for a bone chip in his knee, he returned seven and a half months later to set the mile and a sixteenth track record at Keeneland in an allowance in October. He won by 10 1/4 lengths as he finished in 1:40.79. He remained at Keeneland to make another run on Breeders’ Cup day, where he delivered another track record-breaking performance in the Dirt Mile-G1. Leading gate-to-wire, Knicks Go beat Jesus’ Team by three and a half lengths in 1:33.85.

Once again honored at the Maryland Thoroughbred Industry Renaissance Awards, Knicks Go was crowned 2020 Maryland-bred Horse of the Year and champion older male.

Bred by Sabrina Moore and Angie Moore, the Maryland-bred was originally sold as a weanling for $40,000 to Northface Bloodstock at the 2016 Keeneland November sale.

Knicks Go is one of six Maryland-breds produced by Maryland-bred Kosmo’s Buddy, a stakes-winning daughter of Outflanker out of an Allen’s Prospect mare who has four winners from five starters. After she RNA’d for $195,000 at the 2018 Fasig-Tipton Kentucky fall mixed sale, Kosmo’s Buddy was purchased by Park for a client and later sold to Sallusto and Albina for Newnanner Stud Farm in Versailles, Ky., where she now resides. Her most recent foals are fillies by Justify (2020) and Ghostzapper (2021), and she was bred to Uncle Mo for 2022.

The Moores still own Knicks Go’s half-sister Pinkprint (by Not For Love), and sold her yearling Tiznow filly on Oct. 4 at the Fasig-Tipton Midlantic Fall sale for $150,000.