In a historic renewal of the Fasig-Tipton Midlantic Fall Yearlings sale, where new all-time sale records were set for the average and median, 16 yearlings sold for six-figures, 11 of which were Maryland-breds, on Monday and Tuesday, Oct. 4-5, at the sales pavilion in Timonium, Md. 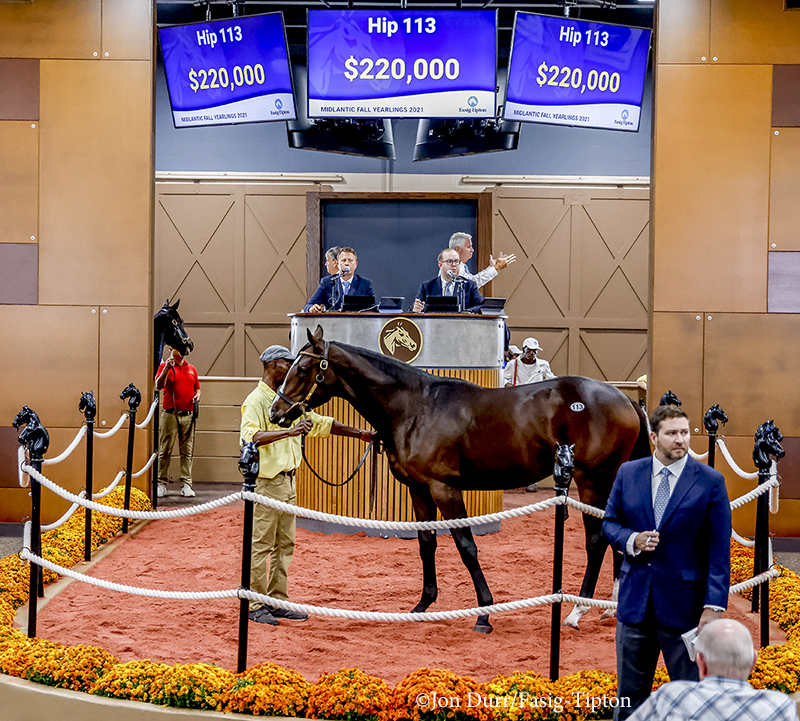 A Union Rags colt out of the Flatter mare Safe Journey, Hip 113 purchased by Mac Robertson, agent for Novogratz Racing Stables for $220,000, was the sale’s third-highest price overall. Bred and consigned by Dark Hollow Farm, the bay colt is a half-brother to multiple stakes winners Joy (Pure Prize) and O Dionysus (Bodemeister), along with stakes-placed Combat Diver (Line of David).

A third-generation homebred who won his class at the 87th annual Maryland Horse Breeders Association’s Yearling Show this August, the colt is from the family of champion sprinter Safely Kept, who was inducted into the National Racing Hall of Fame in 2011.

Two Maryland-bred fillies shared the top spot as the sale’s most expensive filly at $200,000.

Chanceland Farm’s daughter of Street Sense and the Unbridled mare Belterra went to top regional stable Cash Is King. One of the last foals bred by Robert Manfuso, Hip 295 is the final foal for her stakes-winning dam, who has produced stakes winner Taketheodds and stakes-placed Mine Not Mine, and is the granddam of Kentucky Oaks-G1 winner and millionaire Cathryn Sophia, who was raced by Cash Is King. In August, the filly was named champion at the MHBA Yearling Show over 86 other yearlings.

Hip 441, a daughter of Nyquist out of the Not For Love mare How My Heart Works, sold to Cary Frommer. Bred by Bowman & Higgins Stable and consigned by Becky Davis, the filly is a half-sister to multiple stakes winner and graded stakes-placed Monday Morning Qb. Her dam How My Heart Works is a half-sister to multiple stakes winner and Maryland-bred champion Awesome Flower and graded stakes-placed First Mondays, and a full sister to stakes-placed If Not For Her, from the family of Dubai World Cup-G1 winner Well Armed.

Maryland-breds sold for $75,000 or more (with breeder, consignor and buyer):