Warwick Stable’s No More Talk worked his way up to a nail-biter of a finish in the $40,000 Maryland Million Starter Handicap, for horses certified to Maryland Million and/or registered Maryland-breds, as he nabbed Tom Terrific at the wire to win by a half-length at Laurel Park on Saturday, Oct. 23. 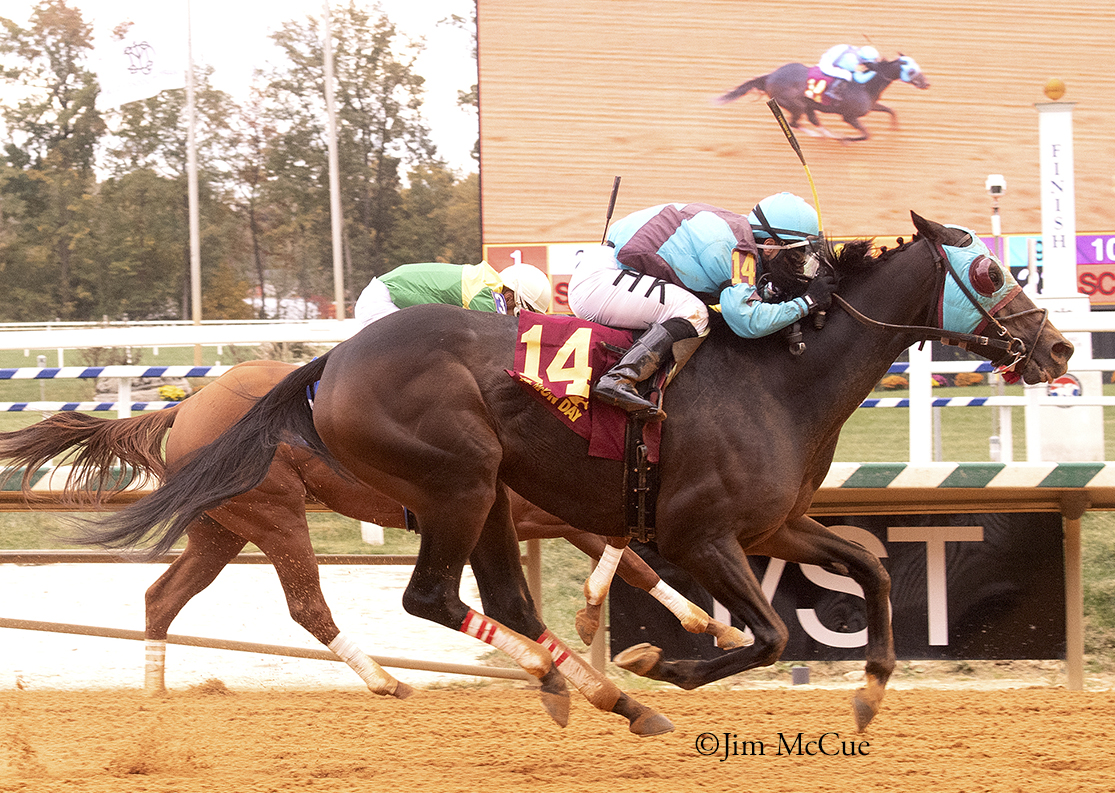 Making his first start for Warwick Stable and trainer Ferris Allen, No More Talk broke from the outside post and bided time near the back of the 12-horse field as early pacesetter Tom Terrific, with Laddie Liam to his outside, led through an opening quarter-mile in :23.20. As they made their way up the backstretch, No More Talk worked his way up the outside and raced mid-pack as they hit the half-mile mark in :46.27. Tom Terrific pulled away down the stretch as No More Talk moved to the outside and laid chase, flying past his foes and catching a tiring Tom Terrific to cross the wire a winner. He finished the seven furlongs in 1:24.12, with Tom Terrific second and Mice and Men two and three-quarter lengths back in third.

It was the 7-year-old gelding’s first victory after five attempts on Maryland Million Day, following a sixth-place finish in the 2017 Turf, fifth in the 2018 Sprint, third in the 2019 Turf Starter and a sixth in last year’s running of the Starter Handicap.

Bred by Robert T. Manfuso and Katharine M. Voss, the son of longtime leading regional sire Not For Love was a $125,000 RNA at the 2015 Fasig-Tipton Saratoga Select sale before selling to Bode Miller for $140,000 at that year’s Fasig-Tipton Midlantic Eastern Fall sale. Debuting as a 3-year-old in January 2017 at Laurel, he broke his maiden in his second start and a month later finished third in his stakes debut in the Miracle Wood. Off the board next out in the Private Terms, he would later run fourth in the Caveat that year before trying the Maryland Million Turf.

He made his graded stakes debut the following year, finishing 12th in the San Francisco Mile-G3 at Golden Gate, before dropping into the claiming ranks while racing in California. He eventually came back east, where he’s been run since the end of 2018.

The veteran gelding is the eighth of 11 named foals produced by 2017 Maryland Broodmare of the Year Parlez. A daughter of French Deputy, Parlez is also the dam of three-time graded winner and millionaire International Star (Fusaichi Pegasus) and additional Not For Love stakes winners Fools in Love and D C Dancer. Fools in Love, a million-dollar broodmare, is the dam of 2021 Jockey Club Gold Cup-G1 winner and classic-placed millionaire Max Player, English Group 2 winner Seahenge and two other stakes performers from five foals to race.

Parlez currently has a yearling colt by Mr Speaker and was bred to Hard Spun for 2022.