Calypso Ghost holds her own in Maryland Million Distaff Starter

Abuelitas Racing Stables’ Calypso Ghost wasn’t going to be outdone by challenger Littlebitalily as she stuck a neck out in front to win the $40,000 Maryland Million Distaff Starter Handicap, for fillies and mares certified to Maryland Million and/or registered Maryland-breds, on Saturday, Oct. 23 at Laurel Park. 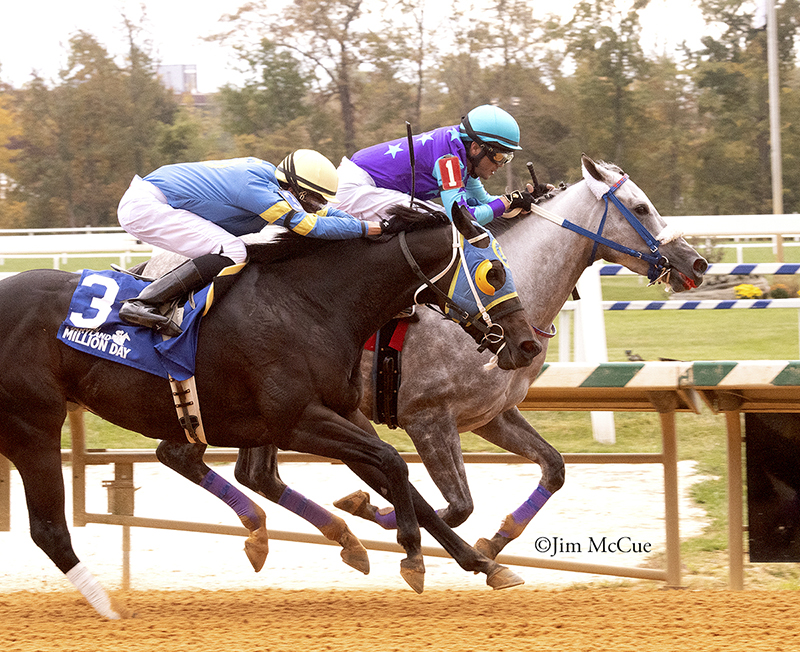 Sent off at nearly 8-1 in the 13-horse field, Calypso Ghost worked quickly up the rail to catch early leader Littlebitalily as they hit the quarter-mile mark in :23.22. The leading pair seemed to be in a race of their own as they made their way into the final turn, through a half-mile in :46.61, with neither willing to concede as they battled down the stretch. Calypso Ghost took over the lead, but Littlebitalily still had some fight left as she attempted to catch her right at the wire, but to no avail as Calypso Ghost, with Luis Garcia aboard, hit the wire first and finished the seven furlongs in 1:24.52.

Originally campaigned by breeder Bonita Farm and trainer Kevin Boniface, Calypso Ghost finished third in her debut as a 2-year-old at Delaware Park in August 2019 and made four more starts before she was claimed by trainer Claudio Gonzalez for owner Euro Stable for $10,000 that November. She broke her maiden a month later by two and three-quarter lengths in her first start for her new connections.

She made nine starts last year, picking up two wins, three seconds and two thirds, highlighted by a second in last year’s running of the Maryland Million Distaff Starter, where she finished two and three-quarter lengths behind winner Odd Gal. The daughter of former Bonita Farm sire Etched won her final start of the season and was claimed out of it for $5,000 by trainer Kieron Magee and owner Gokmen Kaya.

Returning this January, she was claimed by her current owner for $5,000 after winning a five and a half-furlong test by a length in February and made four more starts before she was sent to her current trainer, Rodolfo Sanchez-Salomon. Since July, she’s won twice and finished third three times in her seven starts prior to Maryland Million Day.

Calypso Ghost is the only named foal for her dam A Blossom Fell, a daughter of Midshipman no longer owned by Bonita Farm.