Millie Child gets it done in the $50,000 Maryland Million Turf Distaff Starter

Mill Hill Stable LLC’s homebred Millie Child provided her connections a thrilling conclusion to Maryland Million Day as she battled down the stretch to earn her first stakes victory in the $50,000 Maryland Million Turf Distaff Starter Handicap, for horses certified to Maryland Million and/or registered Maryland-breds, the final of 12 races at Laurel Park on Saturday, Oct. 23. 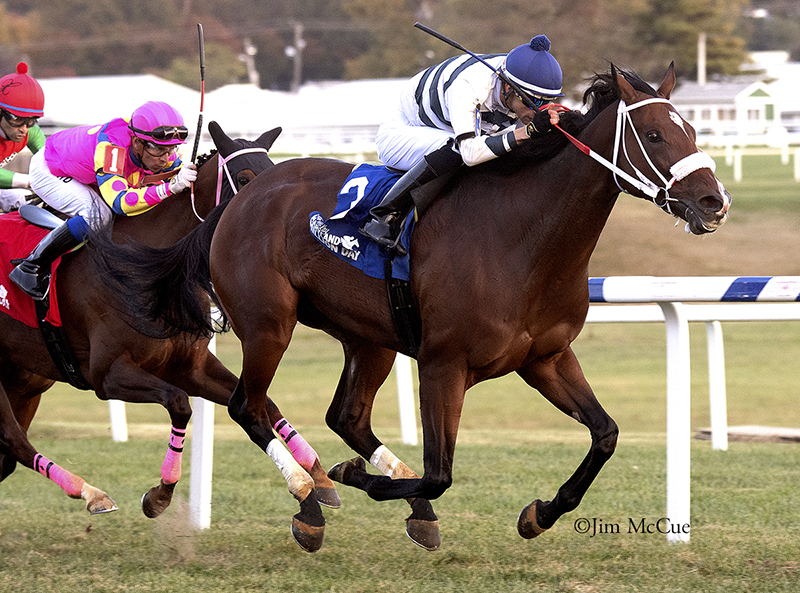 Winless in more than a year, Millie Child was quick to find her place behind early leader Claire’s Darling as they led the rest of the eight-horse field through an opening quarter-mile in :23.80 and half in :49.13 while Award Wanted moved up on the inside. As the three turned for home after six furlongs in 1:13.39, Millie Child moved to Claire’s Darling’s outside and caught her down the stretch before pulling ahead to win by one and a quarter lengths and finish the mile and an eighth on the firm turf in 1:50.36. Claire’s Darling held for second, three-quarters of a length ahead of Award Wanted.

Millie Child, a daughter of former Country Life Farm stallion Freedom Child, didn’t make her debut until May 2019, where the 4-year-old broke her maiden in her first start by three lengths at Laurel. She wouldn’t win again until 10 starts later, in September 2020 when taking an off-the-turf claimer for a $16,000 tag at Laurel going five and a half furlongs.

She made three more starts after that to close out her season, took nearly four months off over the winter, and returned this March. She made six starts this year, her best finishes a second in September and back-to-back thirds in March and April, prior to Maryland Million Day.

The 6-year-old mare trained by Anthony Aguirre has run 21 times in her career and her win improved her record to 3-2-3 while pushing her earnings to $93,925, with nearly half of that ($44,893) earned in her seven starts this year.

Millie Child is the third of four foals of racing age, and one of two winners, for the winning Two Punch mare Pagan Star, who delivered a colt by Divining Rod this past April.