B Determined lives up to name with $50,000 Maryland Million Turf Starter win

Mint Meadows Farm LLC and Donald Metzger’s B Determined made sure he had the last word in $50,000 Maryland Million Turf Starter Handicap, for horses certified to Maryland Million and/or registered Maryland-breds, as he kicked off the festivities on Saturday, Oct. 23 at Laurel Park, winning in the first race of the day by a head. 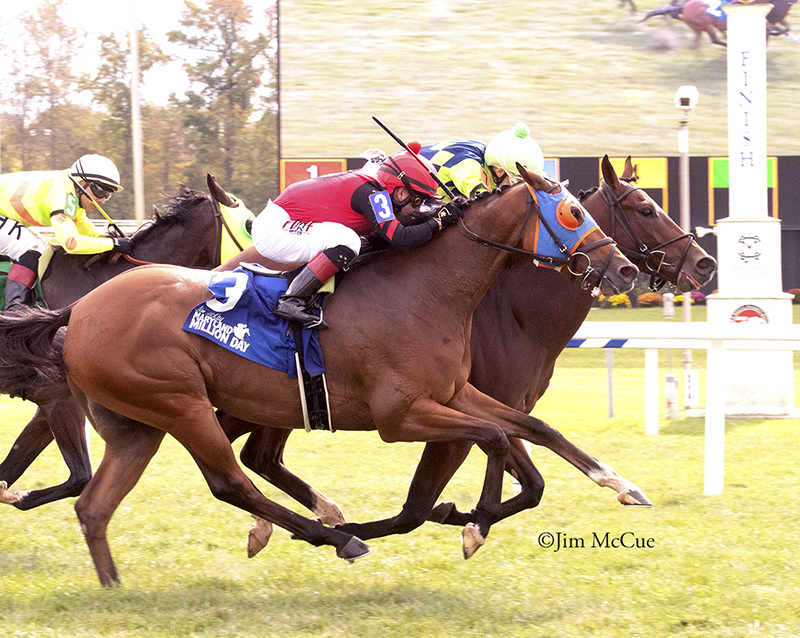 The favorite in the field of eight, B Determined and jockey Charlie Marquez trailed the rest of the pack as Lifespan shot to the lead and set the early pace through an opening quarter-mile in :23.56. B Determined began to pick up the pace after a half in :47.70, as the field began to close ranks going around the far turn. Moving up the outside as they turned for home, the Suzanne Stettinius trainee gave it his all down the stretch, surging past Dreamin of Seville and outlasting the late-running longshot Mint Game to hit the wire first in 1:49.89 for the one and one-eighth miles. Dreamin of Seville was a half length back in third.

Bred by Timothy J. Rooney, the son of Artie Schiller was purchased for $49,000 as a yearling by D. Hatman Thoroughbreds from the 2018 Fasig-Tipton Midlantic Eastern Fall sale. He didn’t make his debut until last year as a 3-year-old, where he finished fifth at Penn National in June, before breaking his maiden by one and a half lengths in a $16,000 maiden claimer at Laurel Park in July going five and a half furlongs on the turf.

Winless in his other five starts that season, he returned this May to cross the wire first at Pimlico, only to be disqualified to third, and had back-to-back seconds before winning by two and a half lengths in a one-mile starter in July at Pimlico. He made three starts, one in August and two in September, his best finish a second, before making his Maryland Million debut.

He is the sixth foal out of Rooney’s Smart Policy, a daughter of Smart Strike who has four winners from five starters, including multiple stakes winners Rocky Policy (Rock Slide, $449,709, Turf Amazon, etc.) and Money Fromheaven (Munnings, $246,711, Maryland Juvenile Filly Championship S). The mare has produced nine foals, including a yearling colt by Maclean’s Music and a filly by Goldencents this April. Smart Policy was bred to Union Rags for 2022.