Gordon C. Keys homebred Grateful Bred delivered another stellar performance in the $75,000 Maryland Million Turf Sprint Handicap, leading gate-to-wire to secure a one and a half-length victory over nine rivals on Saturday, Oct. 23 at Laurel Park. 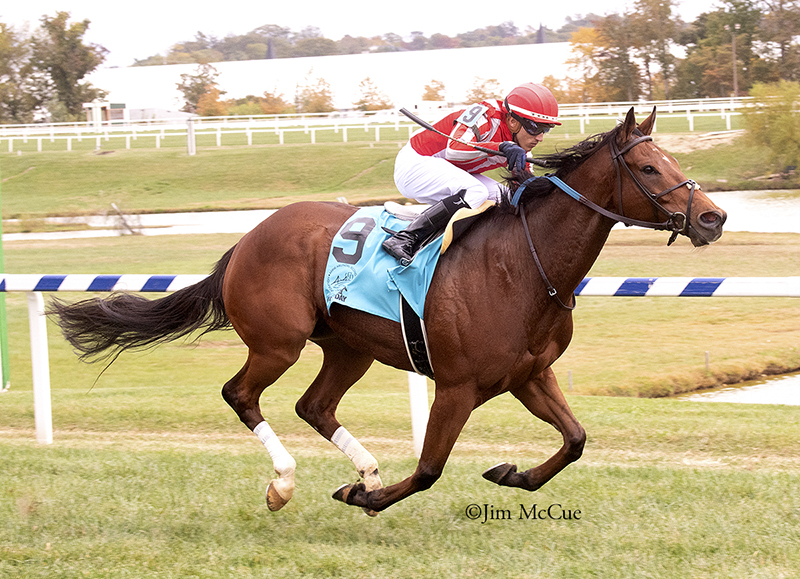 Just three weeks since a troubled trip in the Laurel Dash Stakes, Grateful Bred lived up to his 1-2 odds as he broke cleanly and was guided straight to the lead by jockey Jevian Toledo, with the pair flying through an opening quarter-mile in :22.54. Although So Street attempted to catch him down the stretch, with Sky’s Not Falling and Love You Much launching late runs as they neared the wire, Grateful Bred remained unfazed on the lead and finished the five and a half furlongs in 1:02.29. Sky’s Not Falling was second, just a neck ahead of Love You Much in third.

“It looked on paper like there wasn’t that much speed in the race, and he’s got a lot of speed so we just used his speed today to our advantage,” Toledo said. “He was so comfortable in front. When I asked him, he just took off. He was basically waiting for horses. We got a good trip and he got the job done.”

It was Grateful Bred’s second attempt in the Maryland Million Turf Sprint. In 2020 the gelded son of Great Notion set the pace and held the lead until eventual winner Fiya took over in upper stretch. He faded to finish fourth, three and three-quarter lengths behind Fiya.

Trained by Madison Meyers, Grateful Bred made just one start in 2019 as a 3-year-old, finishing fourth. In his return in July 2020, he broke his maiden by three and a half lengths, made three more starts in allowance company - finishing second once at Laurel and winning another at Pimlico - before making his stakes debut in the Turf Sprint, the final start of his 4-year-old season.

He returned this year in June, winning a a five-furlong turf allowance at Pimlico by two and a half lengths, before picking up his first career stakes win in the Meadow Stable at Colonial Downs exactly one month later. After taking command at the head of the lane, Grateful Bred pulled away to take the stakes by two and a quarter lengths over Sky’s Not Falling, and finished the five and a half furlongs in 1:02.45 while becoming his trainer’s first stakes winner.

Grateful Bred went on to finish second next out in the Rainbow Heir Stakes at Monmouth Park in late August, and took September off before returning Oct. 2 for a run in the Laurel Dash, where he finished fifth. The 5-year-old has now made 11 career starts, with a record of 5-2-0 and $224,015 earned.

Grateful Bred is the last of seven foals, all starters, and sixth winner produced by his dam Malibu Moment, a daughter of Malibu Moon purchased by Keys as a yearling for $21,000 from breeders Charles and Cynthia McGinnes at the Fasig-Tipton Midlantic fall sale in 2003.